Sometimes life gets in the way of your plans. For example, I wanted to spend a couple of blogs this week wrapping up my series on the organ project and offering some recorded material of music from the organ concert a week ago.

Instead, my browsers decided not to let me on the internet, and through a vortex of combined circumstances (ok, I read Dostoyevsky) I was unable to so much as post an entry, let alone coordinate the forces necessary to make all of that happen. Plus I was out of town running a marathon and we had no internet at the hotel (it wasn't worth the extra money, we decided). So for now, off we go on another tangent.

It's a useful tangent, though. I have found that often, when I have a series of things that need to get done, and the very thing I'd like to be doing at the moment isn't working out, I need to go with plan B. No fretting, no wasting time cursing my fate. Just do something else that needs to be done and get back to the first one when the opportunity allows. Because opportunity can be pretty wishy-washy sometimes.

This is a skill I first learned in the practice room. The conventional wisdom is that if you want to become good at something you have to enjoy a challenge. And you have to meet it head on. If you avoid hard work you'll never get anywhere.

True, that. But one day, while working on a ten page movement of a Beethoven sonata, I discovered myself banging my head against page two. It was difficult, I was tired, and demoralized.

So I skipped it. I side-stepped the problem. Did I quit practicing? No. I went on to page three, leaving the second for later.

It turned out that the third page was fairly easy. I went on to page four. Also not so bad. It not only didn't make my head hurt, it gave me the security of knowing I could now play three pages reasonably well in just one sitting. Then I went on to page five, page six, seven, eight, nine, ten.

It turned out that the second page was the hardest part of the entire piece. Right near the beginning, when I was thinking "oh boy, if it's that hard already, how am I gonna to get through the rest of it?" I was actually encountering the biggest obstacle to learning the whole thing. It was right up near the front. And if I'd forced myself to keep working on page two until I had it under those circumstances I probably would have run out of gas and finally had to give it up altogether. Besides, I would have assumed the rest of the piece was like that, and it wasn't. Because sometimes the hardest part of the piece is near the beginning.

Turns out that happens pretty often. I began noticing that phenomenon in other pieces I practiced. I started to realize that there are times when taking on an enormous challenge is the right thing to do, and other times when the best thing is to save it for later. Because in this case I finished the day knowing 9 of the ten pages, and I could spend the entire next day working on page 2 if it needed it, knowing that if it took all day I needn't worry about it because I knew how to play everything else. The pressure was off. And I could start fresh knowing the precise nature and boundaries of the challenge, the size of my goal for that day.

It also gives me a chance, when on a deadline--these days I never learn anything without having a deadline before a public airing--to triage the piece, and to know as soon as I can about how much effort will be required for success, so I can map out how to attack all the material. Getting an overview can be a great way to reduce stress when working on a deadline.

It really doesn't matter what order you learn the material in. It all has to be learned. And it doesn't really matter whether I do the dishes or practice that fugue or write this blog post. If I'm efficient about it, it will all get done. In whatever order I, or my vortex of combined circumstances, allow.


p.s. My cat, Erasmus, also has a strategy for taking on challenges. Whenever a bug, or a sock, or a toy mouse, runs around a chair, instead of chasing it, he goes around the chair in the other direction to meet the very surprised sock head on. He's a genius.

He's also figured out how to deal with disappointment. As I was finishing this blog I headed out the door. Not being able to sit on my lap anymore, he decided that he could at least be near something that smells like me, so he went and sat by my slippers. 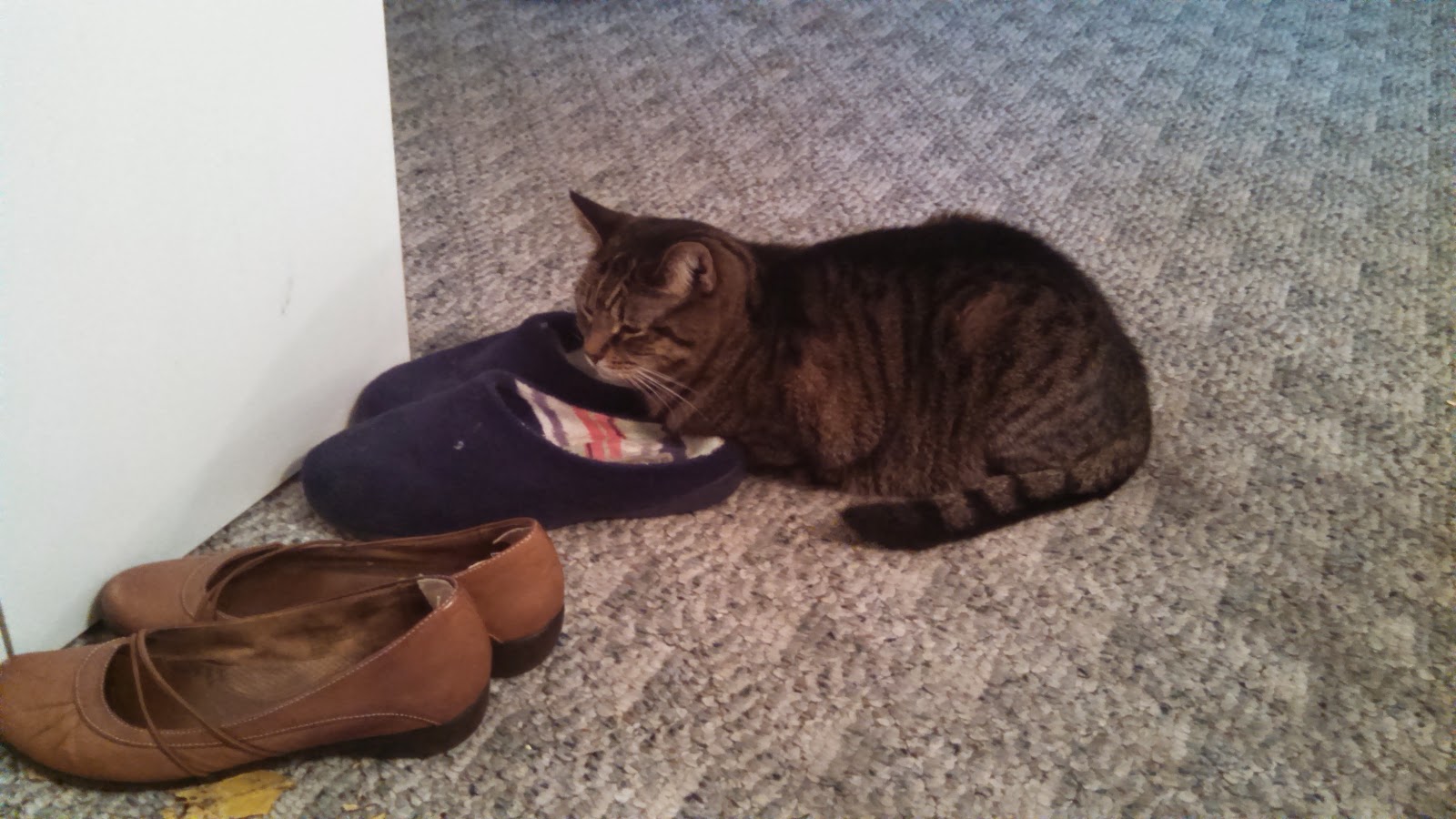 It's better than nothing.

Email ThisBlogThis!Share to TwitterShare to FacebookShare to Pinterest
Labels: practice