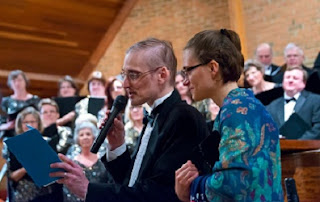 I've come across a lot of different personality types in my journey across life, as I'm sure have you. Some are pretty negative about the way they see life, feeling continually shat upon and thinking that everybody else has it easy and they don't. This seems like a majority opinion. There are varieties of hall-full/half-empty combinations, and some folks who aren't so easy to categorize because they seem to change their ideas once in a while. And then there are a very few people who are not only quite positive about what they think life can be and what they can get out of it, but they spread that joy to everyone around them and cause improved performance and improved attitude from everyone with whom they come in contact; they are liked by virtually everybody. I've had to privilege to know a few of these people. When they are in the room everyone else seems to be able to ride on their encouragement like a wave or warm themselves in the rays of their sun.

Have you ever wondered how they got that way?

I'm not talking about Pollyannaesque denial of reality, either. These folks seem to be pretty grounded in gritty practicality, too--it's not that they don't know what stinkers we all are, it's that they know how to steer the other way and in the process get us all to go there as well, at least for a while.

While I was in chemo I experienced a pretty wild ride on waves of despair and exuberance. Every time I got intentionally poisoned for 5 days in a row things got really ugly for a week or so and then, right near the end of a cycle I'd slowly come out of it and feel my body roar back to life.  I'd try to eat everything in sight to put back the several pounds I'd lost, and resume community with the people I couldn't see while I was under the waves. As we were in the middle of a move to another state, I was saying farewell to the people I'd know for the last decade and also leaving my jobs. Those days were full of major occasions like last concerts, church services, and a graduation. These were occasions that would have felt epic under normal circumstances but now they felt enormous. If you ever wanted to experience huge waves of gratitude for being alive this is one way to experience it. Not that I'd recommend it.

It occurred to me to wonder whether whether this sort of experience wasn't in the biography of every larger-than-life optimist; dark days that had given rise to a great victory; personal struggle with demons vanquished and a sense that everything afterward is a privilege that never lets up. I wondered if it would change me.

I don't think it has, really. After the chemicals wore off and life resumed some sort of normality the soaring movie music began to fade. However, as I explained to a friend who asked, there are two addendum to note here: one is that, well before cancer struck I had a sense that I wasn't going to live forever, that life is fleeting, time is precious, and if you have something to do you'd better do it and not dilly around because you never know. The other was that life is a gift and being able to do what I do is awesome. I would bound up the stairs to the sanctuary every morning looking forward to the practice ahead, know that it would eventually get difficult and onerous but that I'd emerge with a new swath of music in my head and heart and loving the process, or at least the results. So the two cliches were already in place: I wasn't taking life for granted anyhow, and I was motivated by both the joy and the scarcity. Thus, not only do I not detect a huge change in outlook, I'm not sure there was much room to go in the that direction. But I may have gotten even more focused and more gratitudinous (sorry, but how do you make that a noun?)*.

Still, it's possible that there has been some change. A larger-than-life friend I talked to after the treatments thought the experience might change my music. Only recently I've begun to noticed a compositional shift taking effect, and I don't know where all of its roots lie. Perhaps.  I also seem to have registered as a friendly, positive person among my new associates in my new environment. It is somewhat of a surprise to be told that, but then I had been working at it.

Which is basically my point this morning. Outsiders to music tend to think--and share with those of us who are practitioners--that some of us were just 'born with it' and that it just 'comes naturally' as you shake the magic notes out of your fingers. Those of us on the inside know how much hard work is involved: thousands upon thousands of hours of practice, thing building upon thing until sometimes it actually is pretty easy, but you have to go a long way to get there. And sometimes it is still very very hard. Why should it be any different with attitudes?

The mysterious alchemy that goes into great achievement is not so easy to define. Surely there is some native talent for whatever we do. Then there is opportunity, which may be defined as the experiences we have that allow us to grow, some of which may be unpleasant. Then there is the daily work to take what we have and see what we can do with it. It is only the last of these that is under our control, and for that good reason is the one on which achievers tend to focus while others get caught up lauding the other two.

I can, of course, feel lucky to be in possession of the first two: grateful, if you like. And then spurred on to respond to those gifts by adding one of my own: saying yes to them in real time. And my readers can respond in at least two ways as well: as a feel good piece about the joy of life or having a positive attitude or something else we all knew already but enjoyed having affirmed, or...you can work to make these things (in the phraseology of Wallace Stevens) your "gradual possession." Not something you have to jealously guard or fear the loss of, but something you can joyfully give away.

Posted by michael at 8:05 AM No comments:

"At the midpoint of life's journey, I found myself in a dark forest, for the clear path was lost"
---Dante, Inferno (prologue) 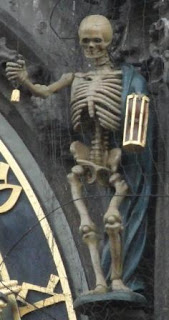 I like to plan ahead whenever possible, and since 90 seems like a good life span, I thought, when approaching 45, that I should plan for a concert which I planned to call the "halftime show." Some wags might point out that there is no guarantee that I would have gotten that right; perhaps I would be enjoying myself too much at 90 and decide to live longer, but in such a case I had a ready answer for them, borrowed from the world of sport: "sudden death overtime."

That would have gotten a mirthful response had I gotten to opine that into a microphone at the planned but ungiven concert, but, as it happens, I was a little busy trying to fend off an early end to the festivities. Cancer struck.

It was one of the better kinds, if you are planning on getting it. Rare, but no more a friend of chemotherapy than was its host. The thing did as promised, and melted away, which was good, because when we found it it was the size of a small football in my chest, trying its best to exercise eminent domain on my heart and lungs. I couldn't take a regular breath, and my exercise regimen was going from Marathon to Couch, which is backwards.

I spent the better part of March 2016 preparing for an early grave, and then, when the diagnosis came, trying to deal with a very aggressive program of chemotherapy, designed for getting rid of large tumors in no uncertain terms, for those with lots of life ahead of them if only they can survive being poisoned for a few months.

I have spent most of my life fearing chemotherapy out of the corner of my mind. I've heard nasty things about it; I hoped that some of those miraculous advances in cancer treatment that we keep hearing about would have taken hold if and when it got to me. But alas, no.

There are many side effects which I now know from experience. Every system in your body is turned upside down. You can't sleep because you have to evacuate fluid every hour; also because some of the pills to take care of the nausea make you very restless and others very sleepy so that you are generally both at once. You can't tell if you are hungry, so you just have to guess, force it down, and if it comes back up you were wrong. Then there is pain in your bones, your chest, your muscles, and, if you are as lucky as I was, you can't stand light and have to keep your eyes tightly shut for days at a time while you lie there, unable to pass the time with a screen of some sort.

The bulk of that turmoil ended over a year ago, and I've written about it on another blog. My rehashing it here is simply to serve as notice as to why it has been so long since my last confession blog and to further explain why, for the next month or so I plan to blog only on Fridays, and then in a largely autobiographical manner, as if I have some catching up to do before deciding when to attempt to return to what this blog was originally designed to do--share piano music on Mondays, help musicians on Wednesdays, and discuss organs and church music on Fridays. It still seems a bit daunting as I write this, but I'm feeling better now, and I've been fairly productive lately, so...perhaps. One of the surprises may have been how long it has taken me to fully recover, and how many times I thought I was back on my feet only to find a couple of months later that I was more recovered than the time before which retroactively meant I wasn't in as good shape as I thought I was. This time, I thought, I'm Really recovered!

In the middle of all the muddle we moved so my wife could take up new employment in another city, which meant I had to leave my jobs and community and start over. I'm still working on it. Next time I will probably talk about Pittsburgh.

Pianonoise the website has had a rebirth as well. I will update that on Fridays also. It has a calendar of events (I have just had two concerts and two more are coming up this semester), a weekly recording, which for now involves recycling of a lot of material (31 hours) generated in Illinois, with the promise of more to come from Pittsburgh in the new year, and links to various articles, new and old, and of course, this blog.

It will be good to share life and music with you again.
Posted by michael at 8:00 AM 2 comments: