The Chorale is a community choral organization that began over thirty years ago as a handful of persons cobbled together to sing Christmas carols in the town of Mahomet, north of here. Still under their founding director, Julie Beyler, they've since transmogrified into a group of about 70 rehearsing every Sunday night and giving three major concerts a year (with occasional additions). The first of these is always the first weekend in November; the second is on New Year's Eve at the Virginia Theater in downtown Champaign.

I should see "us" instead of them, because for nearly six years now I've been part of the group. I serve as the accompanist.

The New Year's Eve concert at the Virginia is an experience like no other. Read on, I'll show you!

To start with there is the dress rehearsal the evening before. It helps if you have done a few of these before because they require some patience. There is no tech rehearsal except at the dress so everything is being done at once. The Virginia is a pretty dry theater so the singers have trouble hearing each other and the piano, I have trouble hearing myself, and the monitors are very far away. The piano is generally overmiced at first so you have the impression that if you were to suddenly strike a loud chord you would blow up the stage! There is occasional feedback. Eventually they get the levels set and the feedback mostly goes away. We have to try to ignore all this and just get on with the business of rehearsing.

In addition to the sound, there is a visual feast going on as well--they are trying the lights. One moment the stage is all green, the next it is all blue, and then suddenly you can't see anything for a few bars. We've all gotten somehow adept at continuing to sing and play without being able to see anything. I think my favorite memories in this regard are from the year pianist Jacquieline Schwab was our guest. She has to be the nicest person I've ever shared a piano with, and in her polite New England way she kept jumping up from the piano bench with her arm in the air and addressing herself to the sound booth in the back of the hall saying, "um, excuse me,....ah, I can't see the keys!" I'll try to give you a vague idea of what all this looks like: 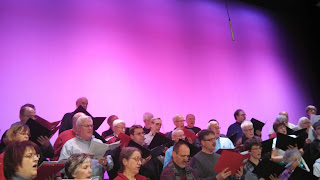 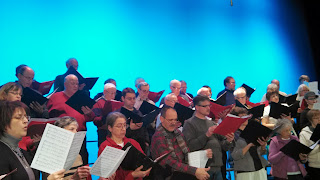 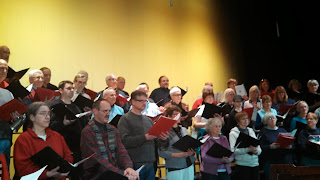 I didn't manage to take any with the lights out. The only reason for the existence of these is that I've developed a talent for being able to play with one hand while taking pictures with my cell phone! But I did get one with the spotlight on me. Like the others, it is a very tame-looking representation and in no way conveys the full sense of disorientation that accompanies this sensory burst: 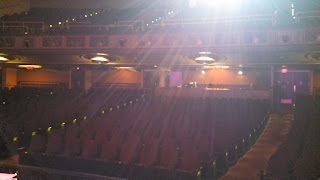 Some of the other challenges include remembering not to look down when the Wurlitzer organ is at the top of the hydraulic lift, and not tripping on the stairs in total darkness while hurrying from the organ (which is in the pit) to the piano (which is on the stage). One also needs to have faith that there is indeed an audience during the two-and-a-half hour show as most of the time the theater is pitch black--only the stage is lit--and one is addressing total darkness.

I'll tell you about the performance next time.