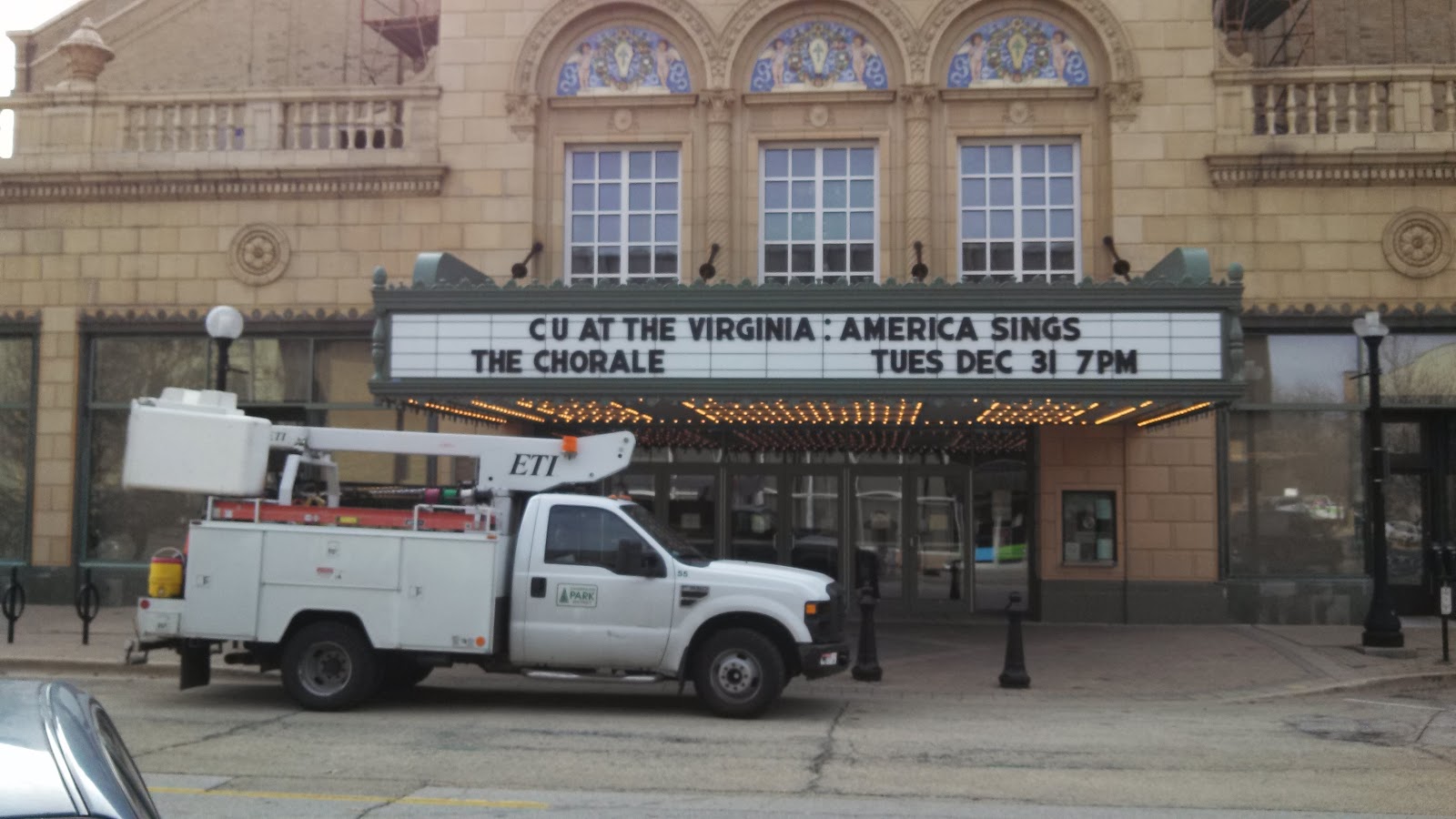 The annual New Year's Eve concert at the Virginia Theater in downtown Champaign, Illinois, isn't like anything else that happens all year. This year's concert packed itself into a trim two-and-a-half hours and contained choral and solo singing, instrumental solos and accompaniment, colorful commentary and jokes, audience participation, a pretty full house, and plenty of time to go celebrate the New Year afterward unless you just wanted to go home and sleep.

Before the show begins I play the Wurlitzer for 15-minutes. The Virginia is an old Vaudeville Theater which was built in the early 1920s and boasts a theater organ dating from the same time. Like the Theater itself, it had fallen into disrepair and been kept going on wings and prayers, or in the case of the organ, rubber bands and duct tape. The organ owes its continued existence to two gentlemen, the last of whom, Warren York, played the organ at this concert until the year before I started doing it. He was a beloved figure in our town, along with Dan Perino, who led the second half singalong into a couple of years ago. Both gentlemen have passed away. Warren York used to always wear red socks, which is why I wear them every year in tribute. Last year after he died the entire men's section of the Chorale wore them as well! 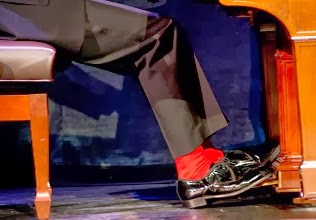 Unfortunately I can't seem to find any pictures of the Wurlitzer. I tried taking one myself--at the concert--you can imagine it didn't look like anything! The Wurlitzer has recently been restored by the Buzard Pipe Organ company of Champaign, Illinois, and looks and sounds great.

The concert is bookended by the 70-voice Chorale singing sets of a half-dozen pieces. In between, guest artists fill in with songs and instrumental music, and the audience gets to join in with the popular sing-along. 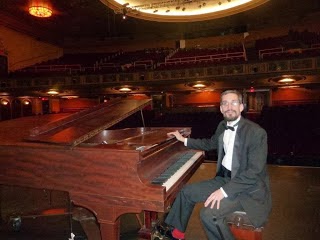 This year I was one of the guests. I played about half-an-hour of piano solo music of the lighter variety. In addition to the Grand Sonata in Rag which I've been discussing in other posts in this series, I played Gottschalk's "Union" and a little novelty piece called "Nola." One of our former college scholarship winners, Caitlin Caruso-Dobbs, returned to sing Irving Berlin's "Alexander's Ragtime Band," "My White Knight" from  The Music Man, and "The Girl in 14G." I was also the accompanist for her.. Since I double as The Chorale's regular accompanist as well, that meant that I was on the stage or in the pit for the entire concert, playing everything. Since the concert began at 7 and finished up at 9:30 (minus the 20-minute intermission plus 15 minutes before on the Wurlitzer and also 5 minute before the second half also at the Wurlitzer) I spent 2 and a half hours in concert. No wonder I'm still a little tired! I told someone backstage that I had set a new record that I wasn't planning to beat.

The Chorale usually goes "American" for this concert, and this year was no exception. We began with a very intriguing arrangement of "Take Me Out to the Ballgame" by David Dusing, which was introduced by real-life radio man Jeff Bossert (who sings with us). We were then joined by a fellow named Josh on the harmonica, the first time either of us had collaborated with the other instrument. The occasion was Mark Hayes's arrangement of "Home on the Range." We then sang arrangements of "the Lonesome Dove" before concluding with a Gershwin pairing of "I've Got Rhythm" and "The Real American Folk Song is a Rag" which introduced Caitlin's rendition of the Berlin and the Rag Sonata. Fade to intermission, complete with a harmonica player strolling the lobby and later some more grand sounds from the Mighty Wurlitzer.

The sing-along always features music from the 30s and 40s, which was a little before my time, and the words are projected on glass slides that date back to the early days of the Theater. Sometimes they also have wisecracks on them. 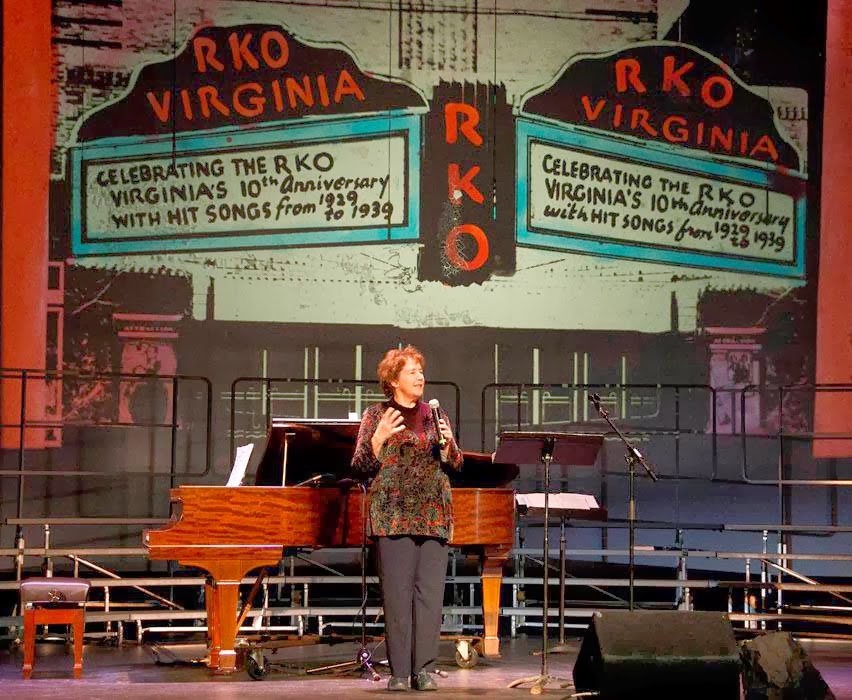 I often have to go to Youtube to familiarize myself with these songs. This year I was at the airport waiting for my flight home from Dallas, listening to them through headphones from my Android and writing them down on a stray piece of staff paper. I notated the melody, hinted at the chord structure, and away we went on Tuesday night!

I should mention here that I had my second pleasant sing-along experience of the holidays season (the first was at the 7 o'clock Christmas Eve service) where a large gathering of people know the tunes well and are obviously enjoying singing them. The first thing you realize as organist is that you don't have to play the melody very much, and that you can even not play at all for a few beats here and there, creating a real accompaniment part under the congregants because they really don't need any help from the organ to sing out and even if you use a healthy selection of stops you are only going to be the junior partner in the proceedings, which allows for more creativity as you simply soak up the sounds and add a little pizazz at intervals. It was terrific! (I also remembered not to look down from the hydraulic lift!)

On the second half, after Caitlynn's singing and my other two numbers, the Chorale came back to sing more Stephen Foster--Oh! Susanna, attractively arranged by our friend Alice Parker. Then came a haunting version of "Poor Wayfaring Stranger" by Michael Richardson (I think he has Illinois ties). Ed Harris's arrangement of "Bound for the Promised Land" uses the original minor key version of the tune. Then we finished off with rousing renditions of "Who Are the Brave?" and "America, the Dream Goes On."

We finish the concert every year by holding hands (both out in the audience and on the stage) and singing "Auld Lang Syne." We sing it through once, then the organ modulates up a half-step (although this year I discovered a small cipher on the low f#--that's when a note won't stop sounding--so I went up a whole step instead. I hope Warren York's spirit won't mind!). This year the ceiling at the Virginia has been refurbished so there wasn't any "snow" as we got to the final chord. And yes, I managed to get a picture of the warm and fuzzy moment, even if I had to play 8 bars with one hand to get it: 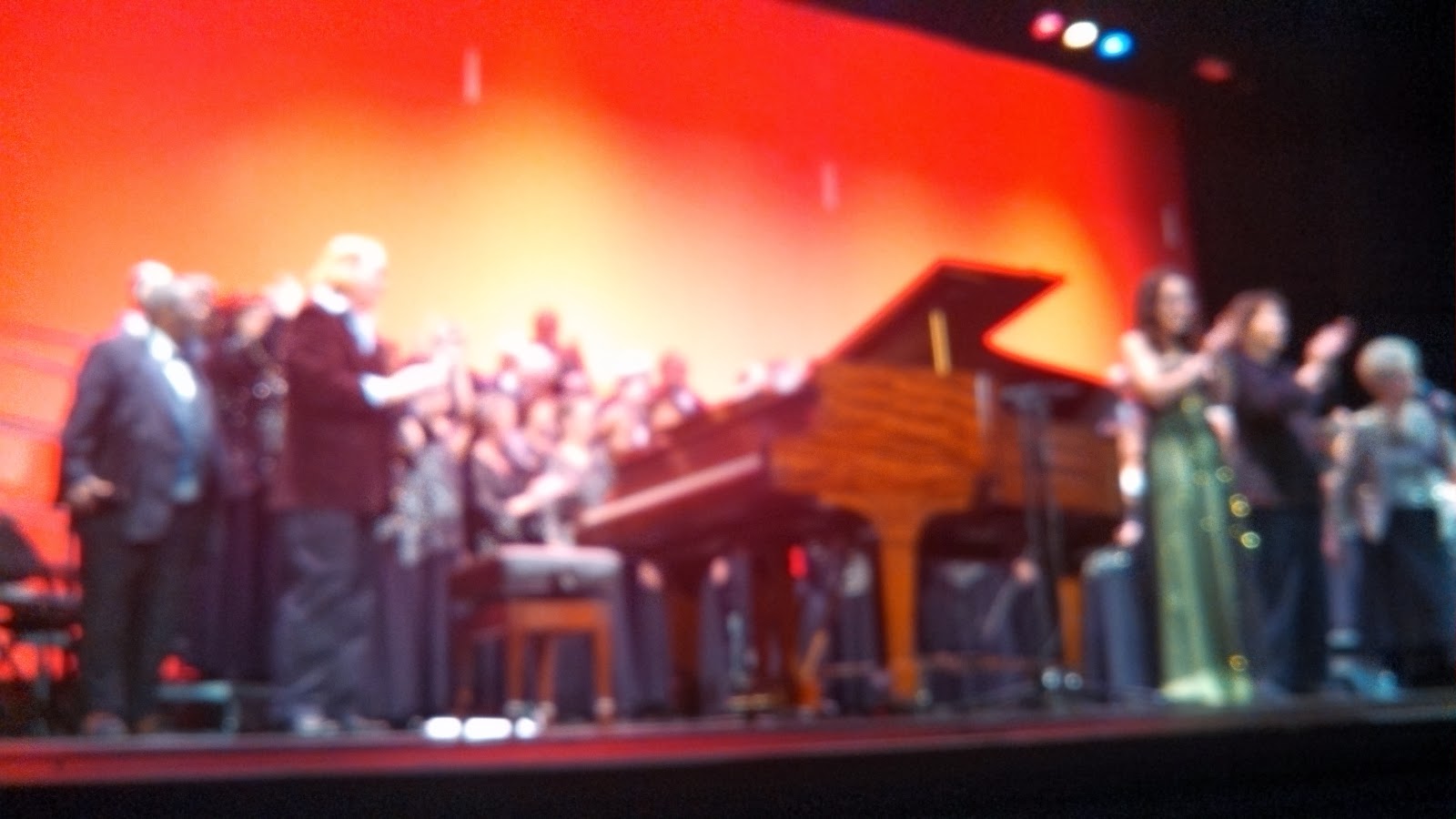 This year one of the funnier moments occurred when the Chorale had just finished singing their first set. The curtain came down quickly and our director, who was going to introduce the singer, was trapped on the wrong side of it. There I sat at the piano, alone in front of the curtain, while a pregnant pause threatened the production. So I played the moment a little, looking wistfully into the wings and giving signs of being very alone at the piano with nobody else on stage. The audience laughed and the show went on after a few seconds. Apparently it was convincing because I was asked later if that was part of the show! Somebody else told me they realized that I am really a ham!

onward to part six, which, I believe, is nearly the end. Thanks for reading this far. Seriously.
Posted by michael at 10:00 PM