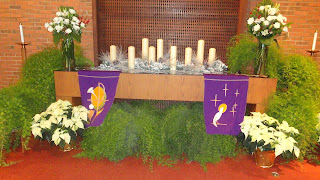 In a few hours, the Christmas Eve marathon will begin at my church. Services at 5, 7 and 11. Rehearsals with the band, the choir, several soloists, myself (!), and my student, and, after the rush of humanity that comes through our doors at 5 and 7 for the roughly 90 minute services, a quick trip home for Christmas Eve dinner--shocking how the atmosphere changes all of the sudden--and then, when we get back to church, feeling a bit frayed, wondering if we can do this all again, the most peaceful service of the night. There is an air of beautiful exhaustion waiting for us at the end! We wrap around midnight and I end up watching Christmas movies until 2 a.m. because I can't get to sleep (I'm too tired for that). I wouldn't trade it. But it's probably a good thing that it doesn't come more often.

Oh, the things we do so we can light candles and sing Silent Night. All the running around, the stress, the sermons reminding us that those things aren't really important, then rushing to the mall again anyway. All the parties and the concerts and the seasonal festivities of one sort and another: whew! we're almost there. Silent night and the candles are just around the corner. And if that isn't your thing (or your religion)  Merry Christmas nevertheless. You can translate it however you want so it comes out peace, joy, hope, and love. And ixnay on the crazy stressful rushing around-nay.

My Christmas present to you this year is a curious little piece by Samuel Wesley, based on a curious little carol you don't hear much anymore called "God Rest Ye Merry, Gentleman." Notice it's not "God rest ye, Merry Gentleman." I think that has something to do with the kind of rest involved, and not that the gentleperson was merry to start with.

The piece is actually called "The Christmas Carol Varied as a Rondo for the Piano Forte." Wish you'd thought of that, don't you? Sorry, it's taken.

Despite the piece's strange little title, it is a nice bit of music. The title, I fear, sounds a little bit like an academic paper. Actually, as all my academically inclined friends know, it really needs a colon. As in the formula: Pizazz-filled shorter Title, colon, longer and far drearier but exhaustively descriptive subtitle. So the piece, as an academic paper, might read as follows:

I'm afraid the reason for this semi-scientific titling might have something to do with a musician's attempt to legitimize their craft in jolly old mercantile England by making it sound like music was an enterprise for the mind, and the high-minded, not just some silly old stuff for making idle people merry.  That sort of thing has had a long history. Samuel did, in fact, have a rough time keeping on with music, given his father Charles' attitude toward it, which was pretty much the standard attitude of the time and place of persons of standing, namely, that music was a frivolous activity, unworthy of a gentleman. This was also not the time to suggest that music might have something to do with the feelings, so playing up the compositional techniques involved (variations on the tune) or the was the piece was constructed (as a rondo) might seem to give it some legitimacy  If you are not impressed by this, then clearly you are the wrong audience. But the music may move you all the same. It isn't really a rondo anyway, and the variations of the tune don't in any way resemble a set of standard variations on a tune. Instead, it is really a kind of run-on, stream-of-consciousness fantasy on the carol. And, for all the running around it does, there are moments of peace, and joy, and...well, you get the idea. I'll be playing it tonight at the 7 and 11 o'clock services. If you can't hear it live, you can listen to the piece via the link below, wherever you are this Christmas Eve, and if you and I never meet, God rest ye merry, whomever you are. Merry Christmas.