I got a call to play at a funeral home a few weeks ago and found this waiting for me at the organ: 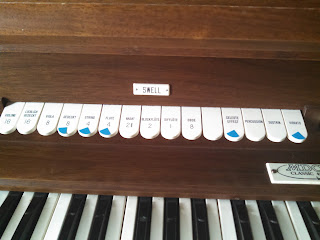 Do you see that some of the stop tabs have little blue stickers on them? I assume this is because whomever plays there regularly (or did) decided which stops they wanted to use and was afraid someone (like me) might come along and mess them up so they marked them.

This is a bit like marking the note names above the keys. It is useful at first but you'd better learn them as soon as possible. And it is the same with the stops.

I've been writing for pianists who are starting to play the organ in church who find that the organ has a lot of knobs and buttons and aren't really sure what to do with them all. If you have someone to teach you then all the better, but many don't. I got a quick tutorial from an organist as a teenager, but not much more, so I had to figure much of it out myself.

So will you. And in a way that is the best method for doing it--continuing to experiment with the various stop knobs to see which sound combinations please and which do not. But experimentation comes with bravery, and at first I will assume you aren't very confident about it. This is, however, why I've been insistent that while I limit you to the handful of stops that are "safe," and show you how to avoid calamity, that you don't simply leave the same grouping of stops on for an entire service, but change them regularly. Start to notice groupings that you like, but keep searching for others. And know what the basic types of organ stop are and what they sound like. Eventually you should be able to sit down at a strange organ having never even heard it before much less played it, and make a pretty good guess as to which stop combinations to use just based on your knowledge of how organs work.

In a week or two I will show you some basic principles behind organ registration--typical patterns organists use. This will assume that you know all the stops. At this point we've only covered the ones with whole numbers like 8 and 4 on them--the flute stops, the foundation (or principle) stops, and the string stops. We've also talked about the couplers, and the crescendo pedal.

On the stop jamb at Faith those stops are on the bottom half of each division (the great or the swell). The stops toward the top are the color stops--they make the organ sound more interesting, but these stops can also be unfit for typical hymn singing or some pieces or organ music. The general principle behind them is that they do not always do well by themselves--you should first have on at least an 8 foot stop or two (which is, remember, normal pitch) and then put one of them on in combination.

Mixtures are compound stops. When you play one note, you are listening to air rushing through multiple pipes at once. How many? Look below the term "mixture" or "scharf" or whatever they're calling it. You'll see a roman numeral. That is how many different pipes are grouped together. The one on our Great says "IV" which means that four pipes are sounding each time a note is played. 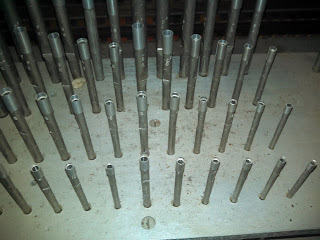 Those multiple notes consist of the note you played, a fifth higher, and perhaps an octave higher and also an octave-and-a-fifth higher (if you've got a four-note mixture like we do).

On the swell, our organ has a three-note mixture, and so does our pedal division (which I haven't talked about much because I am assuming you aren't playing the pedals at the moment anyway).

Mixture stops sound pretty bizarre by themselves (try it!). But in the right combination they contribute to a really full, rich organ sound, such as you haven't had yet if you'd been following my method.

Try this: start with the 8 foot principle, the 4 foot principle (probably called "octave") and any 2 foot stops (ours is the "super octave"--apparently it has special powers or something). THEN add your mixture stop to that. You have just built your first "principle chorus" from bottom to top and added a mixture to that. This will give you a nice majestic sound for playing the doxology, or any loud verses of a hymn. I would recommend, however, that in playing that hymn that you take the mixture stop off for some of the verses. It can get monotonous if you keep it on all the time. Just as capital letters can be GREAT for occasional emphasis, BUT REALLY IRRITATING IF YOU USE THEM ALL THE TIME!

on to part four
Posted by michael at 8:00 AM