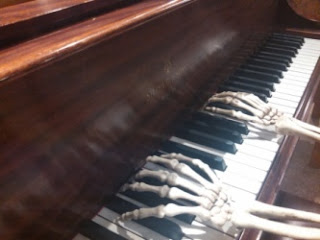 One of the things that I learned before last week's mostly organ concert is that I can play the piano in very low light, including pieces with leaps and hand crossings. Hopefully the audience found out, if they didn't know it already, that they would like to hear more from that Brahms fellow.

The only piano piece on the program was a Brahms rhapsody, specifically the second one in g minor. I was practicing it a few years back and decided it might not be a bad selection for a Halloween concert. So with a little help from the resident Steinway and Mr. Brahms, I told them a ghost story.

Brahms's disciples would shriek that what he wrote was absolutely music and music alone, which meant it should be completely independent from any ideas or narrative. Making a ghost story out of it would certainly be sacrilege.

But as Schumann, who had to be considered in the anti-programmatic camp, complained, composers shouldn't provide programs for their pieces because the audience is robbed of the chance to determine one for themselves. This is hardly the same as saying there should be no such ideas inspired by the music, rather it is saying that the audience should be allowed the freedom to create it, rather than having the composer insist on one interpretation himself. This is an interesting proposition. Schumann's response to the person who asked what his etude meant, therefore, (which was to sit down and play it again) does not necessarily mean that the music meant only itself, but that he couldn't, or wouldn't, explain it in words. I would group his response with that of Aaron Copland, who said, if asked if the music meant anything, he would say yes, and if asked if he could explain what it was, he would say no. There is a deliberate vagueness there.

On Friday, I told the audience that I had a ghost story, but I didn't fill in any details (other than suggesting the Black Forest as a possible backdrop). This could have been a useful listening exercise.

Now in any piece of classical music, particularly one that is seven minutes long, the structure of the piece is very important. If you can't follow the musical argument for several minutes, you are likely at some point to get bored or confused. And yet it is unlikely that most members of my audience had such listening skills. Traditional analytical terms like exposition, transition, 2nd theme, development, recapitulation and all that only go so far anyway. I am conversant with them, but frankly, they make the musical process sound rather dull. I am also likely to zone out when program notes consist mainly of a musical blow-by-blow description of a piece, particularly when it is limited to musical procedures--the sort of thing 21st century composers often write about their own music ("it is based on a four-note motive which is then played backwards against a descending scale derived from the first three notes transposed up a third set against the remaining notes in the brass..." sheeesh.)

Using one's 'romantic' imagination can be a nice corrective (or rebellion) against that sort of thing, but it is also a way for the mind to attempt to find a coherent structure for the piece. The part where they are walking happily into the forest, the place where it grows dark, the part where they see a lonely house in the distance and make for it... as naïve as it might sound to an academic or a professional musician, making a "story" out of a piece of music takes the music out of passive sound absorption and into the realm of raw material out of which sense--and form--is derived. At least, that's the hope. And as story, there ought to be some narrative continuity, which is just what the audience needs to find. All the better if they find it themselves.

Framing the piece as a ghost story did something else, too. I had an interesting conversation with a pianist after the concert in which I pointed out that pianists of today tend to maintain consistent tempi and minimize dynamic contrast. We are still, it seems, in reaction against Romantic "excess." This is one case where the recent authenticity movement fails to be authentic at all. The irony is that we are so busy rescuing the Baroque and Classical periods against Romantic 'vandalism' that we fail utterly to realize that when we are playing Romantic music, that those very discards ARE authentic. Brahms's score is full of places where the music goes from piano to fortissimo in just a beat or two, and while the tempo fluctuations are not similarly marked, those pianists who survived into the early 20th century showed us that in the 19th tempo was much more fluid, and that the net effect was far more dramatic. Pianists of the time may have been more technically sloppy, but they played with far more emotional impact. Even if we find that embarrassing.


With any luck, telling my harrowing tale from the keyboard the other night made me approach the piece more like Brahms himself would have. Unfortunately, only one wax cylinder of his playing survives, and it is so distorted that it is hard to know how he played. But at the very least, I got to run an interesting experiment, which may have gone against the grain of many a modern pianistic approach, a good deal of which in the end is as much a reflection of fashion as authenticity.

And if that thought scares some of you, well, BOO!