Pardon me while I ignore the holiday season for one more week. It's Music Monday, when I assume for my audience anyone, musician or not, who wants to listen to some interesting music, and perhaps find out something about it.

In this installment, I finally get around to playing a rather famous piece by Handel which, for some reason, despite being in my 40s and having absorbed gobs of piano literature for a quarter of a century, hadn't been on my radar. Fortunately, it only took a couple of days to rectify the omission.

The piece in question bears the laconic title "Air" (with variations), but it has since, courtesy of the Department of Posthumous Publicity, earned a nickname, and now goes forth under the title "The Harmonious Blacksmith." Look all good nicknames, nobody is sure how it came by its name. The Wikipedia has some good stories, said to be bogus, with one more likely to be less bogus. One of these fragments concerns the oft-repeated B natural in one of the variations (starting at 2:02 in the recording below) which is said to be the smith hammering on the anvil. Well...sure...

An aside: I once gave a concert which included Beethoven's Eroica Variations, which includes several prominent Bbs that the composer insists on drumming on, and someone had forgotten to tune the piano. That #%*& note was one of the worst offenders. Then I had to follow that up with one of Prokoffiev's War Sonatas, the one in Bb, which also makes use of that same drunk-sounding note on a regular basis--and loudly. That was some 20 years ago and I still haven't completely recovered.

Where were we? Something more pleasant, like a nice set of variations by Handel.

There are people, of course, who believe that the entire purpose of music is to be pleasurable and/or relaxing. In which case, it is hard to beat one of these sets of Handel variations. The piece made me feel very satisfied and bourgeois. I couldn't help but think of 20th century American composer Charles Ives' comment about everybody breathing their own symphonies while they were in the fields, harvesting potatoes. Potato symphonies aside, though, this tradesman, blacksmith or no, seemed very in tune with the universe.

Since I was playing the piece on the piano (I don't have access to a harpsichord) I found myself focusing on and then enchanted with the beauty of the sound. I was also playing the piece more slowly, which seems to contrast with the standard approach of pianists when they know they are playing something written for the harpsichord, which is to play very fast and fleetly, bringing out any virtuosic properties, as if that is all that a harpsichord may do. As a result of ignoring this edict, mine may one of the slowest recordings you hear of this piece. It doesn't bother me any. I enjoy its leisurely approach. 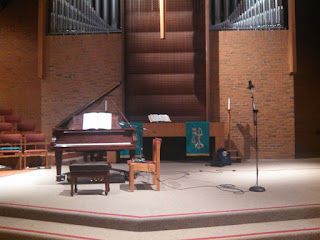 Unfortunately, the recorded sound doesn't adequately capture the atmosphere of the live performance. This is because I was doing some experimentation with something that I never do--putting a microphone inside the piano. Nobody actually sits inside a piano during a piano recital, so I've resisted putting the microphone there. But I've been experimenting with the recorded sound at intervals, and last month I put the near mic almost inside the piano and got a pretty nice sound. The other mic sits at a comfortable distance and picks up the sound in the room; then I can balance them.

However, the gain (recording volume) in the near mic was up too high and I couldn't get a nice blance per the usual methods, so I tried adding a synthetic microphone, which is to say I duplicated the far mic in post production and panned it in the other direction, to allow a stereo sound from afar and also to allow it to be turned up in relation to the close up sound. The result is curious: it seems to have a third dimension, and reminds me of several professional recordings I've heard. On the other hand, it disorients my ears slightly, because I seem to be listening to the piece from several places at once. I suppose as an amateur recording engineer I could be experimenting with cubism.

A few days later I played the piece for an audience for a Thanksgiving celebration. Whether you celebrated this American holiday or not this past weekend, I hope you enjoy some of the fruits of it. I am grateful for being able to share it with you.