The Turn of the Page

It was a few days before my organ concert and I was doing what you'd expect me to be doing to prepare for an organ concert. I was standing in the middle of an aisle at Home Depot.

"Do you need any help?" Said a friendly guy in a bright organ jacket.

"I think I may be beyond help," I joked. Then I explained my predicament. I was trying to create a special effect for a Halloween concert. It involved page turning (that again?!?)...

One night, seated at the organ, having pretty much given up on finding that  @$!%#& lost chord, and attempting to instead practice for my upcoming concert, my mind started to wander in search of logistics. By custom and conservatory rules, pianists must memorize their music, and organists often do not--curiously, I had memorized the piano piece on the program, and one of the organ pieces, too, for convenience, but the others I thought I'd use music for, even if the notes were about the size of gnats in some of them.

(I should explain. Organists sometimes shrink down their music and put large numbers of sheets into these behemoth double decker productions that allow maybe 10 pages of music to fit on the music rack at once so no page turning is necessary at all. I had seen this before but never actually made one myself, before that last concert...)

But by the second-to-last piece on the program I was using three great rolls of music, 5 pages each. And I hit on the perfect person to help me unroll them when I was finished.

Early in the concert we'd had some fun with an incompetent page turner, and the idea that our newly digitized console has a GPS system (last year's revelation was that it now has a playback system and I thought I'd up the ante by making up this bizarre musical-navigation feature). Then, when it was time to play the Bach I spent some time telling the audience about the "dance of death" chapel in Lubeck and the enormous painting on the wall of death carrying everyone away. That turned out to be a nice setup for my page turner.

The audience didn't know he was there to turn pages at first. He stood at the organ long enough looking menacing that it looked like it was my time to go. Then he captured the roll of pages, held it victoriously aloft, and carried it back to the nether-regions from whence he came. 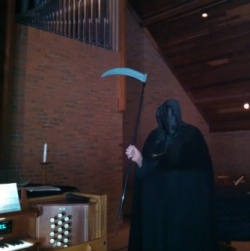 He did this a second time a few minutes later, emerging from his lair to traumatize the organist yet again. The third time, he thought he'd scan the audience for any likely candidates.

"Grim" was quite an effective page turner. I would like to thank Steve Shoemaker, who audience members might have noticed was about the same height as the Mr. Reaper, (Steve's one of the tallest guys in town), but he was seen conspicuously sitting in the audience before the concert, so the reaper must have actually been played by...

In any case, as I mentioned last week, the middle section of the Guilmant sonata movement I played at the end was too major key and songlike for the Reaper, so he skulked off to his lair. Imagine, I thought, if the final page turn of the concert could occur without anybody to do it, if it just floated off of its own ghostly accord!

I mentioned this to my wife, who is in the middle of residency interviews around the country this year and wouldn't be able to attend the concert. She didn't think it would work. Neither did a couple of other people I told it to.

But, I'm happy to say, it came off rather well. The helpful fellow at Home Depot found a couple of wooden dowels (because they didn't have clear plastic) and a very low budget solution (worthy of Hammer Films, no doubt) ended up looking rather spectacular, don't you think? 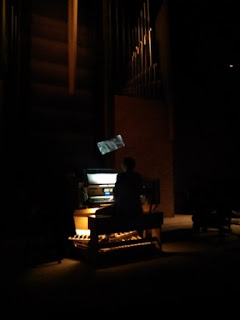 All this occurred at the end of the start of the repetition of the opening theme, the so-called "recapitulation" which is a very important spot to notice if you are trying to follow the structure of a piece of music. And I'm pretty sure the audience didn't miss it!

You can listen to this spectacular piece of music below: I'm still working on video from the concert itself. While I'm at it, I'd like to thank videographer Doug Abbott for all his time and expertise, and Michelle Wellens, who was the spirit behind the page turn! and also the voice of "Siri" in the aforementioned GPS sketch, along with Shane Smith, who played the hapless page turner (I'm so hard on my page turners!).