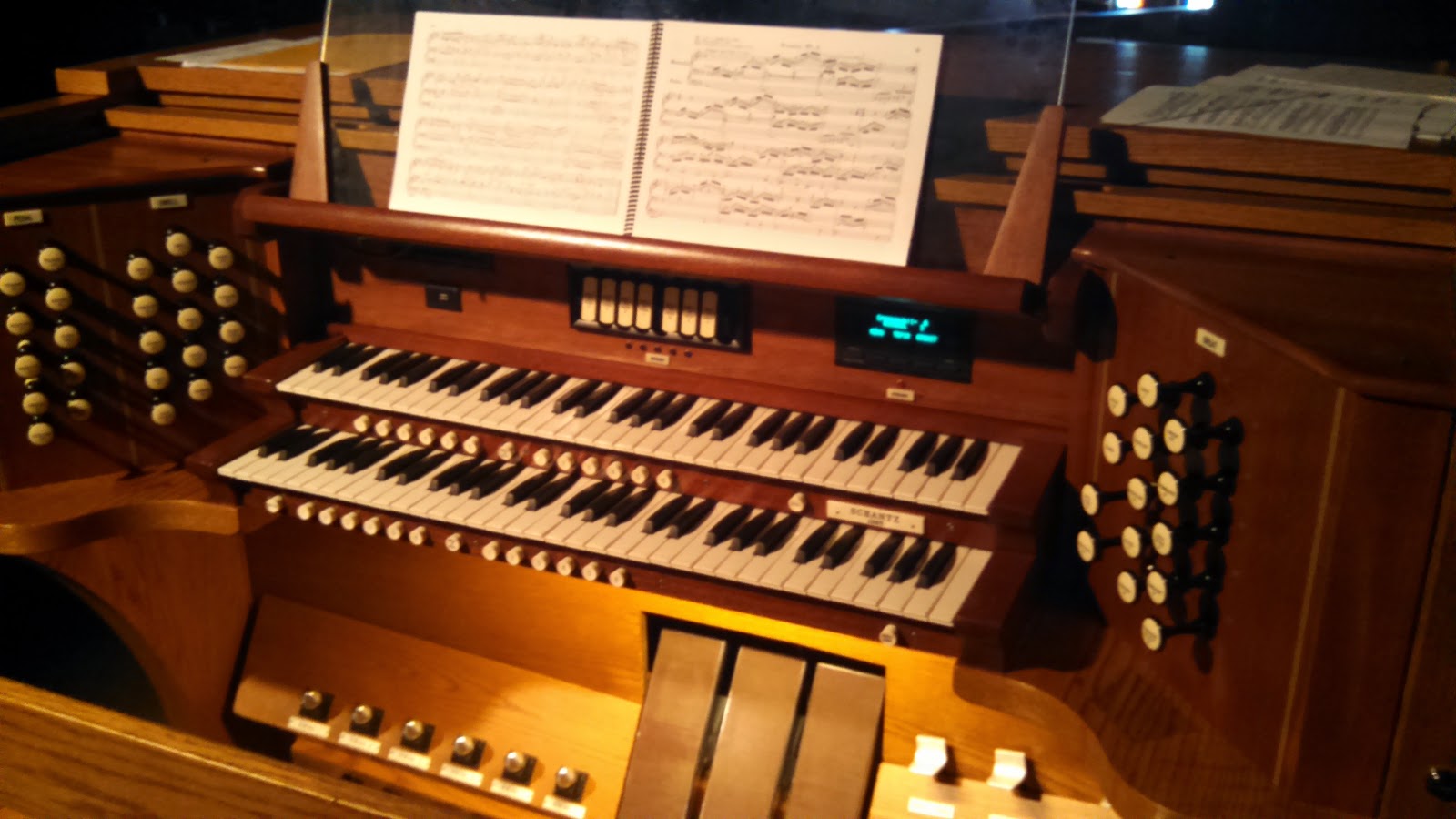 As I mentioned at a recent organ concert, our updated church organ has a digital playback system. This means that, if you hit the "record button" before you start to play, every note, stop change, volume pedal control, and so on, gets recorded as MIDI data, so that when you press the PLAY button it will replicate your performance using the pipes and shutters of the organ. In other words, the organ will play itself.

We didn't ask for that feature; it came as part of the package. But now that we have it, my fertile brain has been coming up with ideas for what to do with it. There are the usual solutions:

--an organist who came to "guest practice" on it recently mentioned being familiar with such a system, which can be used for feedback. You can record your performance and listen to the results, with an ear toward what could be improved. This is just like recording your practice for critical listening, except that you can do it in the actual space, listening to the actual instrument "live." I have to say, it was a bit disorienting, not to say very cool, to be able to walk around the sanctuary and hear the organ from different angles, not to mention head on instead of from in the corner where the console sits. And it does provide useful feedback.

--the fellow who installed the system mentioned that one church wanted one so the organist could go on vacation once in a while. She had nobody to sub for her, and just wanted to get away, so she left a playlist for the service and had somebody pressing buttons. I'm not planning to record the hymns that way; we have other musicians to fill in, and live singing with a prerecorded track is always dangerous. But I did tell our choir director that for Christmas this year I'm giving her a prelude and offertory that she doesn't have to play when I'm gone the week after Christmas. She'll do the hymns live, but the other pieces will be available at the touch of a button. Any cookies she makes as a result of not having to spend that time practicing have to be shared, of course!

ok, those uses are somewhat boring. Here's where it really gets interesting.

---Since the console is not disabled during playback, you can play on top of any prerecorded material. That means I can play a duet with myself. I told my congregation to look out for a piece in which I am listed twice, as both organists in a piece for organ, 4-hands. I've been too busy so far, but in January, I'm going to do it. Of course, I already played a duet for piano and organ at my concert. There will be more of those also.

---there are certain logistical problems needing a solution. Whenever the choir needs the piano to be close by we put it next to the choir loft. Since the sanctuary's architect thought it would look pretty to put the instruments on one side of the altar area and the choir on the other, the choir is about 30 feet from the organ. So is the piano. When we move it for better ensemble, what it means is that, supposing I play an offertory on the piano, I then have to run to the organ to start the doxology. If I prerecord the introduction to the doxology, I can have somebody just push a button and then just saunter over there at my leisure just in time to take over live when the introduction is over.

--Maybe sometime I'll get in line to take communion with everybody else while I'm "playing."

--because I record the voluntaries and offertories I play each week to post on the web, I often run into problems with the annoying birds nesting just outside the wall of the sanctuary where I typically place the microphones. During the month of June I have to wait until they go to bed to record; however, by then I may be too tired. With the new system, I can do the performance whenever I want, and then return later, set up the microphones, and capture the audio as the organ plays back what I've already performed. This also saves me running up the aisle every time I do a take, since the microphones are in the back of the church and the console is in the front.

--another advantage to performing a piece and waiting until later to do the audio capture is that you can record a piece at the console while it is still under your fingers, and, if the organ is badly out of tune, say,  because it's November, and the organ gets tuned in December when you are really too busy to record much of anything, you can save it for days, weeks, or months, until the organ is tuned and even if you are too tired to do anything at that point because it's the middle of December but hit the play button you can make nice, in tune recordings anyway. Now that's progress!

--I can also do several takes and decide which one I want to use before I even set up the microphones, saving time later on in the process.

It seems like I had a few more fun things I could do with this system but at present I'm drawing a blank, so if I think of them, I'll divulge them in a future installment.