Who's telling the story?


Each Christmas a little drama unfolds atop our entertainment center. To you it may be just the same old Christmas story, with some people in a barn having a baby and a cast of handfuls looking on adoringly. Well, it may be the same old boring story to you, but it depends on how you tell it. We start with an empty stable.

There's nothing particularly unusual about having some (or all) of your characters arrive throughout the season of Advent, leading up to Christmas, although I suspect most of us just put everybody in there and get it over with. Letting everyone arrive on their own timetable puts the story in motion, and gives it a beginning, middle, and end.

True, it's a pretty conventional structure, and, if you've been through the season enough times it can get a little stale. Starting with the holy family, adding a couple of sheep (last year I think they were the first to arrive, actually) and a shepherd, a random villager or two, and finally a trio of wisepersons just in time for Christmas Eve; it's a nice discipline in gradual evolution and waiting, but you can also use a calendar to the same purpose. Even the two-inch characters seem to get bored. Then things start to happen.

For instance, no sooner did the wiseguys arrive but they suddenly remembered they forgot to do something at home. Or Mary sent them off to boil water.

Don't worry--they got back in time. Plenty of time. This was Mary's first baby so it took a while. So what do you do while you wait? Remember, the wisemen like to look at stars. Since Bethlehem apparently did not have an observatory, they did the next best thing, which was to go up on the roof. By the way, kids, it is not recommended to climb to the roof of your house and look directly at a supernova.

We won't ask where that peasant is going with that sheep. All I can say is that the poor sheep had to put up with a lot. One of the wisemen, Belshazaar, I think, decided that one of the sheep would make an excellent circus animal.

At one point, there was a game of sheep hoisting. I am afraid to ask, but I think the shepherd may be attempting to knock the other sheep off the roof for points by launching the other sheep into him. I think the wisemen put him up to it. Entertainment is difficult in 1st century Palestine where there is no football.

Maybe you are wondering how the first sheep got up in the roof in the first place. Apparently they are good climbers. We never seem to be able to keep ours off the roof; that is, when they are not plummeting to their deaths on the ground far below. They tend to do this in the overnight hours. We've asked our night watch-cat, but he seems not to know anything about this.

A good game of sheep hoisting makes everyone hungry (the wisemen won, by the way, 6-3) and so when a boy from the village shows up with a casserole, he is given a round of applause.

It is not all fun and games, of course. Everybody has to get in a line so they can take turns holding the baby. When it is time to go, everybody is sad. Wave to the wiseguys, kids!

We wouldn't want to argue with received wisdom--surely getting there IS half the fun. But it clearly isn't all the fun. Still, it can be a challenge.

Last year there was a new wrinkle in the story. My wife put up the stable, and the various characters in our drama were again positioned offstage, so that they could gradually arrive a few days at a time during Advent. But there was a new problem.

Our storage unit has four stories. And some of the personnel were placed on lower levels. Anybody looking at this could see the logic problem in asking those folks to simply walk over to the stable and take part in the pageant. Obviously two inch high figurines make of paper and cloth have to obey the same laws of physics as the rest of us. Duh.

There were only a few days left until the big event. The three kings from the east sweated. They paced. They conferenced. And they came up with a plan.

One morning my wife woke up to find the kings climbing their way to glory and a part in the play: 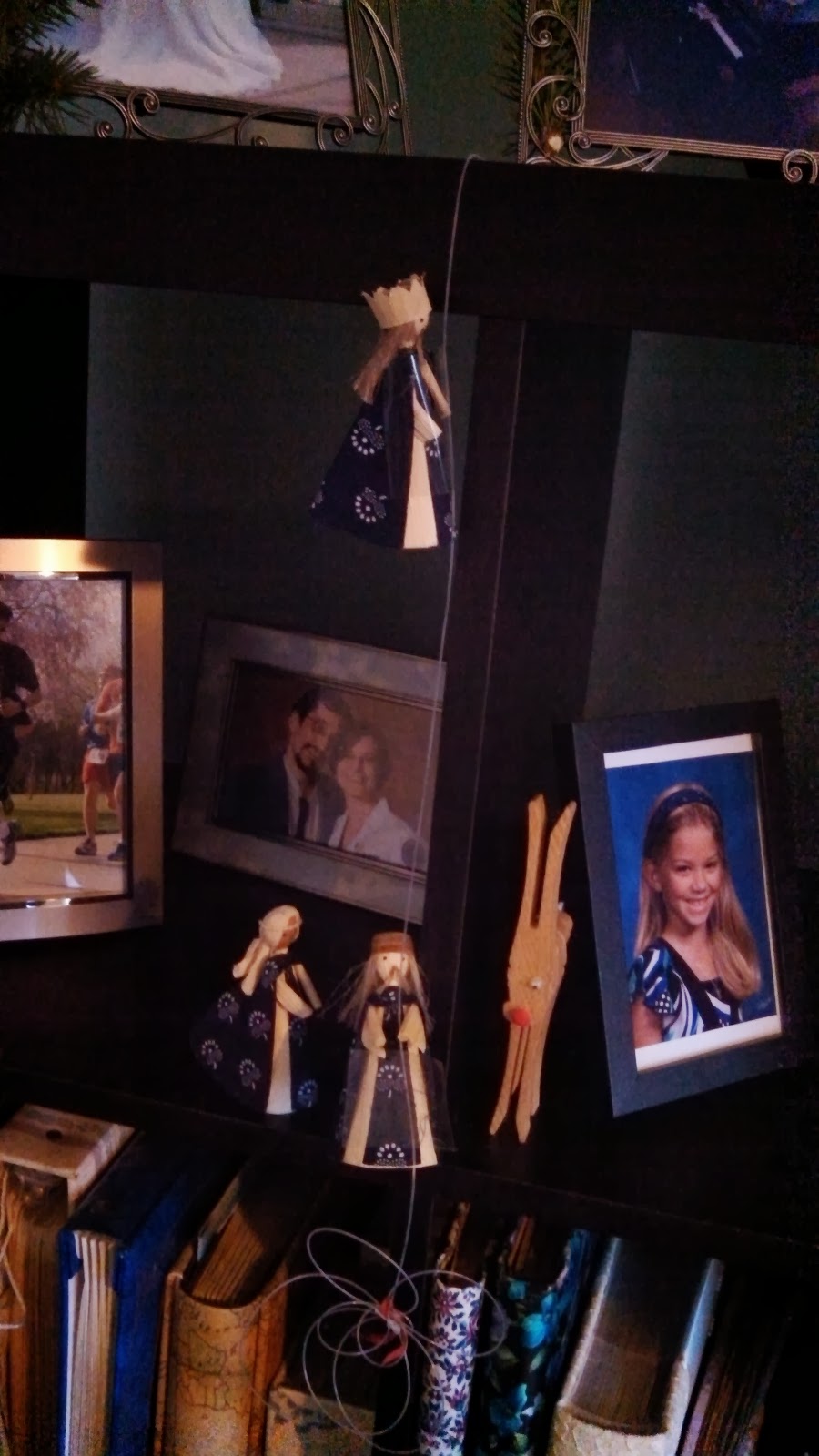 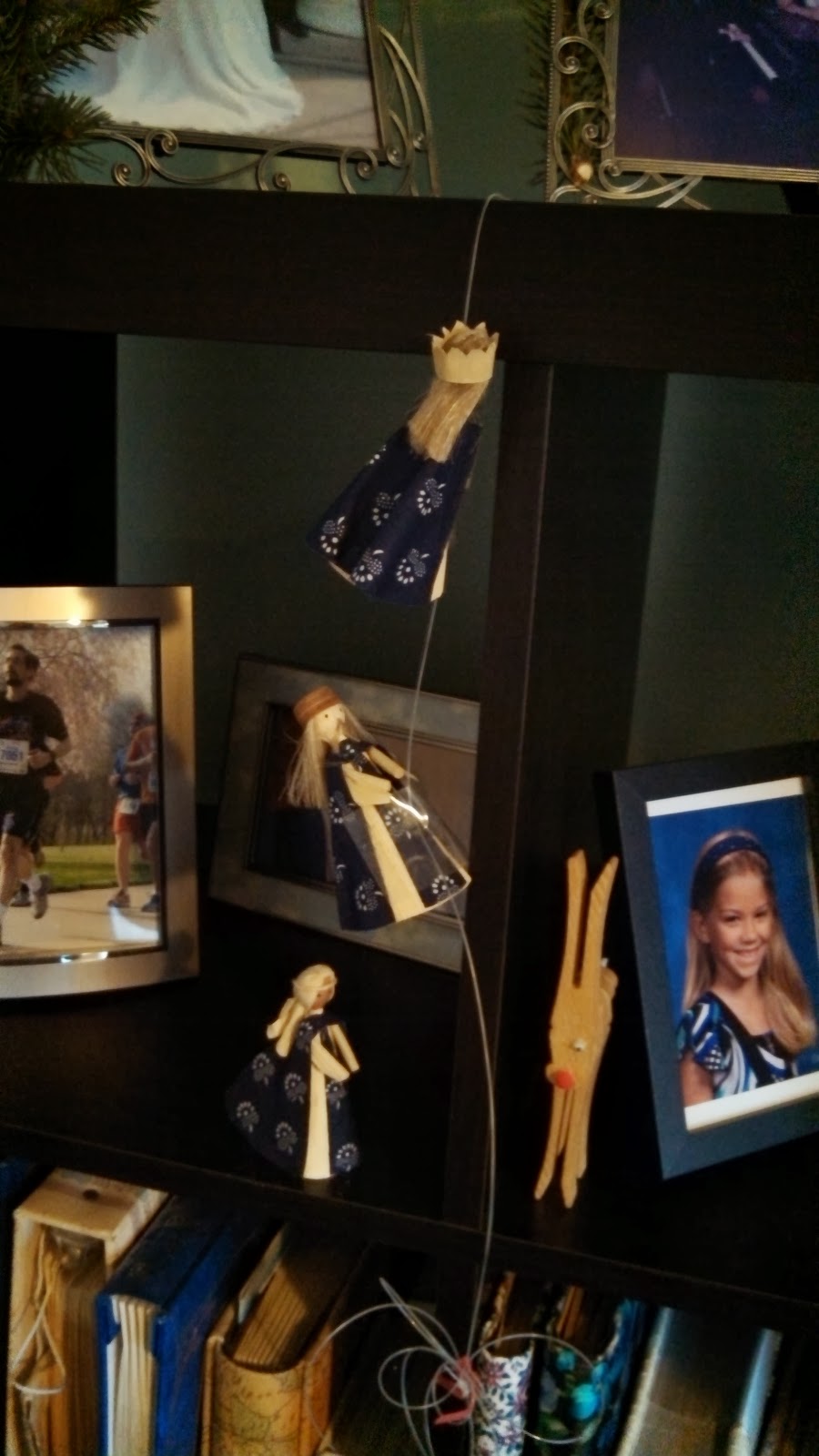 Once all three of them were safely to the top, they kindly lowered the rope so Random Peasant Woman with Son #1 could also join the festivities. Wasn't that swell of them? 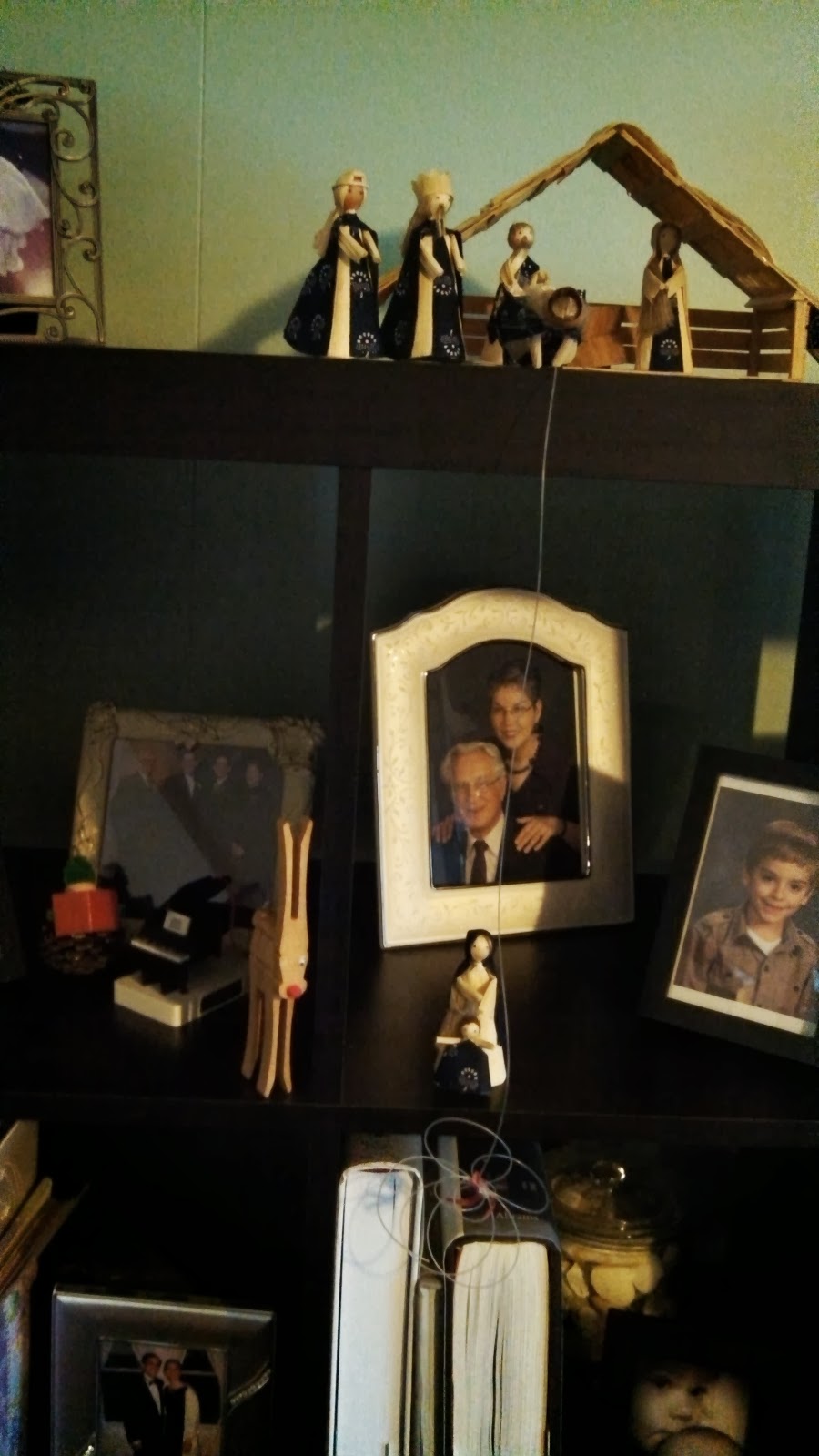 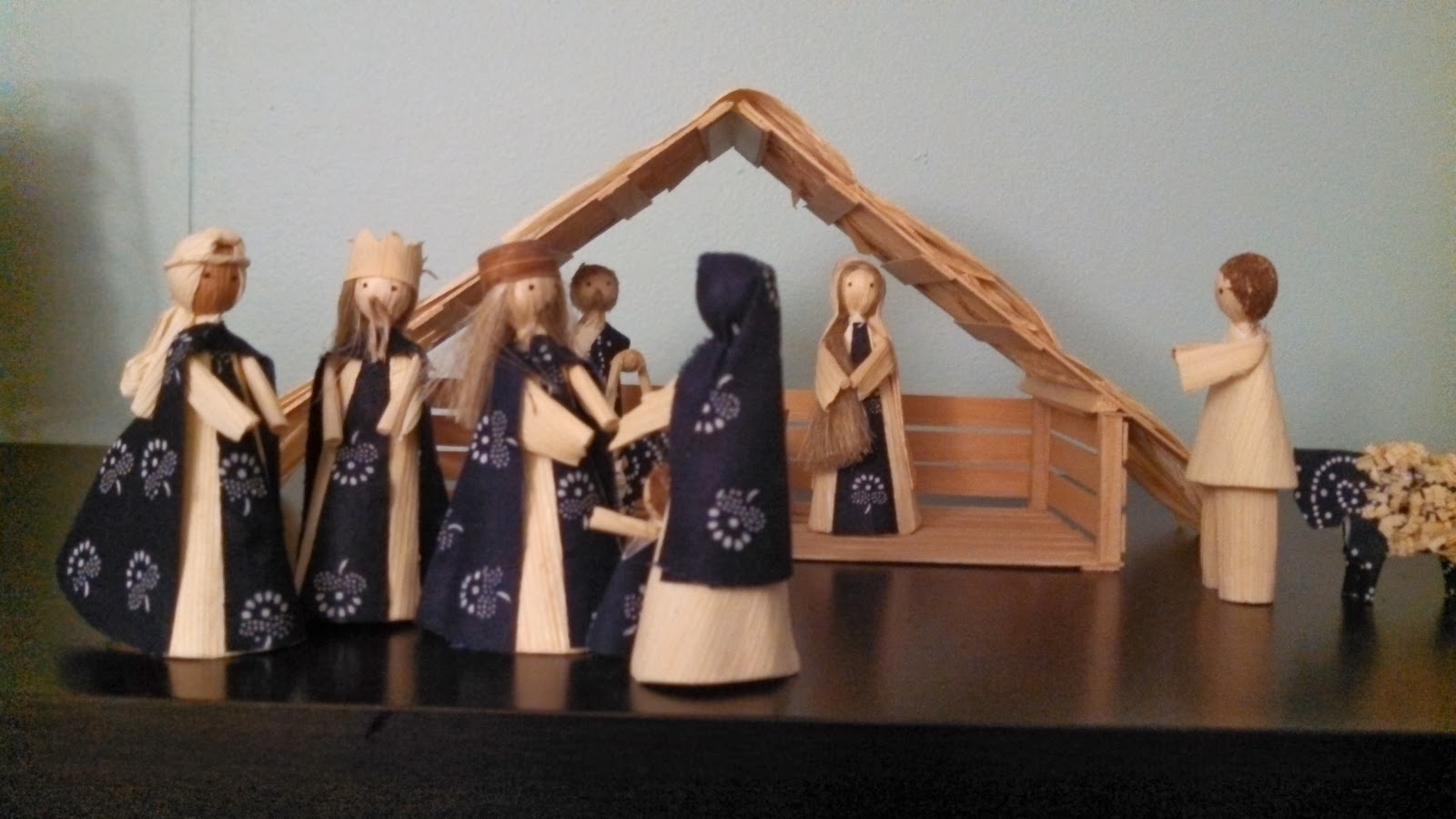 There was a joyous reunion. 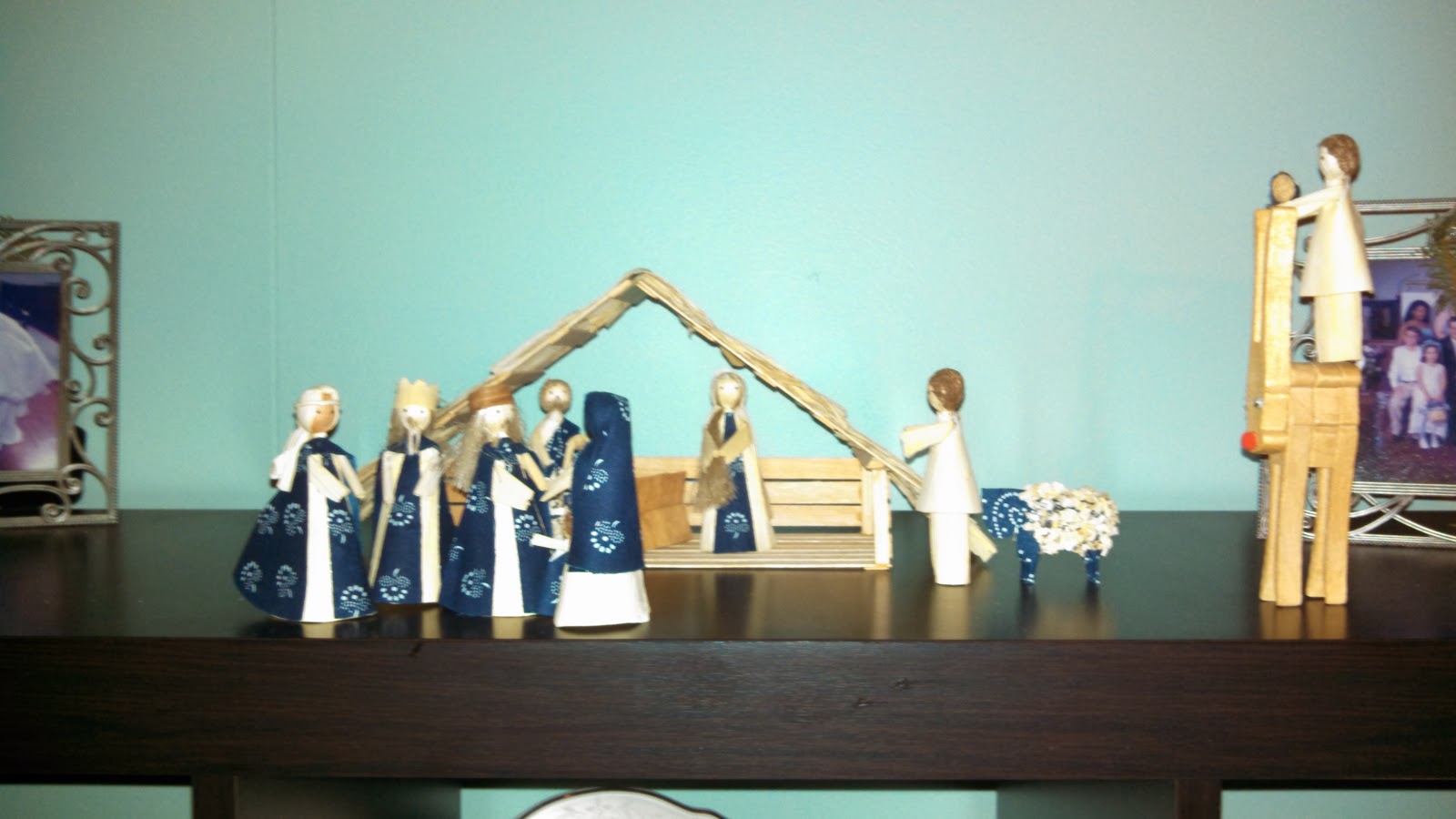 The last to arrive was the reindeer. Everybody knows clothespin reindeer with red felt noses can fly, so this one was easy.

Which brings us to this year. We put up our stable on December 5th, the eve of St. Nicholas Day, but this year it remained empty for an unprecendentedly long time. Then I got this email:

Dear Dr. Hammer,
My name is Mary. My husband and I are looking for a nice barn for a few days and noticed that you seem to have one available. We are only a couple of inches tall, and we don't play loud music or anything. We have with us three kings and a shepherd. They also keep to themselves and don't listen to loud music. Do you allow animals? We also have a couple of sheep. We will clean up after them; their poop is probably so small to you that you wouldn't notice it anyhow. We really like the pictures you have on your entertainment center and hope we will have some like that when we can afford it. Unfortunately, the inns around here are really expensive. We tried the one next door but they said they are full. Could you please let us have a place to stay until Dec. 26th?

p.s. Do you have a cat? We will stay with you regardless, but we are hoping not. Our sheep had accidents last year by falling off the cliff and we are sure they are not suicidal.

﻿
﻿I dutifully forwarded this to my wife, and she agreed they could stay with us. The response was effusive:

Dear Dr. Hammer,
That sounds wonderful! Thank you so much for your generosity this holiday season. My husband and I will move in right away. We will probably see you tomorrow. Again, thanks so much!

Dear Mary and Joseph,
We would love to have you come and stay with us. You can come as soon as you want and stay through Epiphany. We do have a cat, but he is not as much of a climber as he was in his younger days, so your sheep will probably be safe, although if they fall to their deaths, we can reincarnate them and put them back in the stable for you: no worries. Also, the sheep poop is no problem. A little Pledge at the end of the holiday season will take care of it, I'm sure. See you soon!
Michael

All of them arrived in a pleasant mob, and promptly set up shop in their usual positions. When Dear Wife awoke on Tuesday she was surprised to see them all, including the baby. Well, I explained to her, this is Mary's tenth baby Jesus (she has been having one every year since we were married) so he must have come quickly. She said she had heard Mary arguing with the angel Gabriel because she had really wanted a girl this year she could named Jesusina. But no dice. The story is the story and it has to go the same way every year.