It's not just for shepherds anymore....if at all

I keep thinking about that shepherd over there on the right. 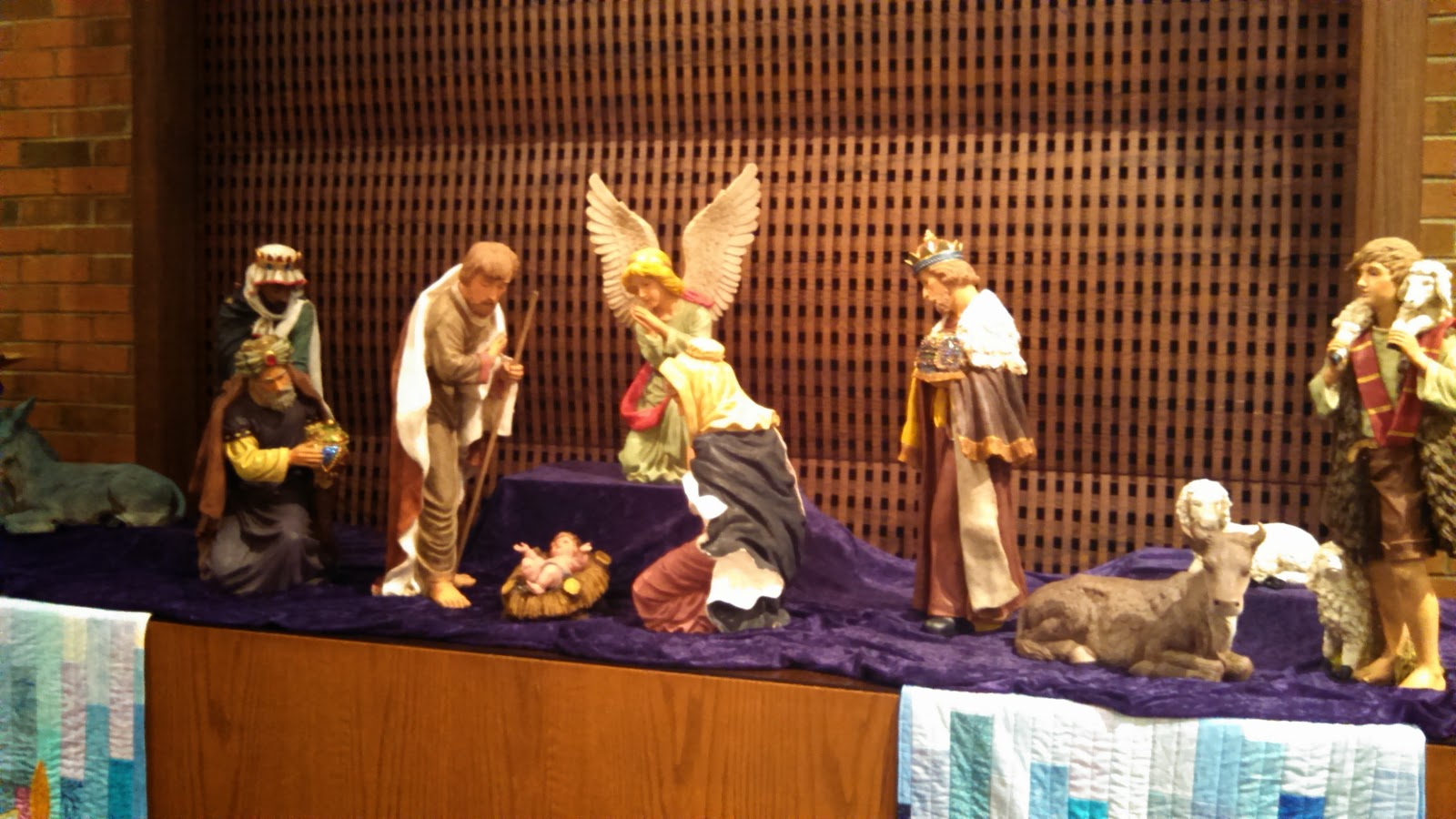 If there's ever been a more visually obvious way to emphasize the word "marginalized" I don't know what it is. There is only one of him, and he is right at the edge; it looks like he barely made the cut. They'll let him be part of their tableaux if he doesn't say anything and doesn't draw any attention to himself. They're ignoring him.

Well of course they're ignoring him, you say. All their attention is on the infant in the middle. He's the reason for the season. Not the shepherds.

Shepherds, you say. Oh, right. The Bible says there were shepherds. Plural. More than one. Possibly lots of them. So why do we only have the one?

I'm not accusing our crèche of anything unusual, here. Most of the ones I've seen in fact only have one shepherd, with a sheep over his shoulders so you can tell what he does for a living. And it makes him look cute--by proxy, since the little lamb he's chosen is always adorable. He's usually on the periphery, with the sheep.

The kings, on the other hand--the Bible says nothing about the "wise men from the east" being kings, nor does it say there were three of them--but there they are, right up with the holy family, all three of them. They are also centered on the action--sort of. Actually one of them is turned a little awkwardly so he seems to be presenting his gift to us, rather than the infant in the middle.

They must know somebody to get those front row seats right next to the holy family.

This Christmas season I'll be sharing several pieces with you that bear the curious title "pastorale." This word is a cousin of the word "pasture"--also "pastor" as in "shepherd of his flock."

The reason these pieces bear witness to the season is precisely because of their connection with shepherds and the shepherds connection to the Christmas story. See, in the Bible, a whole throng of angels decided they had some news they wanted to go tell the shepherds. So they went right to where they worked (they knew the shepherds were in a job that wouldn't give them any time off) and they told them that news. And the shepherds left their flocks and went to see the baby that was to be a Messiah.

I wonder if their employers ever found out, and if they got fired for their civil disturbance. The citizens of Bethlehem couldn't have been all that pleased to see them.

Shepherds aren't exactly at the top of the food chain when it comes to social importance. They are right at the bottom. And like people on the bottom, they don't get to speak for themselves. Which is where things get interesting.

Typically, a composer with the ability to speak so that others will hear, and listen well into the next century, is a highly trained fellow with at least a spark of genius and a cosmopolitan background. Let's put Mr. Liszt in that category. Here is a little piece he wrote when he was on a three-year journey through Europe. His musical travelogue (he called it "Years of Pilgrimage") contains this little specimen. It has a few "rustic" touches, seen through the romanticized gaze of a city boy. It is also fairly simple of construction, and contains plenty of repetition. The entire first part unfolds over a bass note that does not change--a drone note, common to many pastorales.

Is anybody planning to ask?

Here it is, anyway. It's a pretty little piece, not the sort of thing that would disturb us in any way. Unless you start thinking outside the music, and start asking troubling questions about who gets to speak for whom and so on. Next I'll be wondering if it actually snowed at the first Christmas.