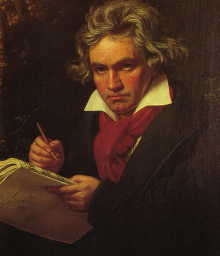 No matter how famous a particular artist gets there is always some small sliver or their work that is almost universally recognized among the general public. The rest simply doesn't make the cut.

For Beethoven, one of those famous bits is the first movement of the so-called "Moonlight" Sonata. It is possible for amateurs to play, which is one major reason for its success. It also provides a strong dose of atmosphere to the generations of young romantics that have abused its steady triplet pulse ever since, and that same predictable rhythmic writing has not only made it manageable for the fingers but easy on the mind. Not to mention the cache of a thrilling nickname and programmatic whispers of thwarted love (he did, after all, dedicate the Sonata to a female).

But the Sonata is in three parts, and those of us who desire to see things whole would not willingly let things stand as they did last week with but one of those parts completed. And so, dear listener, I offer you the second part. It is in the style of a dance, faster than the first, and rather too full of day-lit jubilation to fit well with the appellation "Moonlight."

It is also a bit harder for the young ones to play.

Oh well. Perhaps it will not change your life. But it is short, and I think it is the perfect interlude between what was and is to come. Beethoven took the unusual step of instructing the pianist to "attack" this second movement without pausing at the end of the first. So imagine that this has been a very short week and that this week's offering comes right on the heels of the last.

[listen to the 2nd movement: Scherzo from "Moonlight Sonata" by Ludwig van Beethoven]