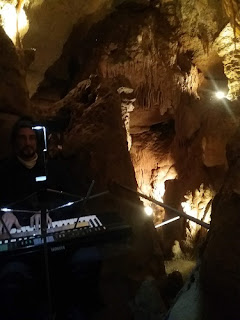 You fellow cavers know what I mean. The rush is over, the stress is over, the holiday season is (mostly) over, and...whew! Let's all retreat into our caves and just sit and think. Or just sit.

I'll start things off with a momentous pronouncement....

I think I ate too much fudge.

We have a seven-person staff at Third Church (at least) and I decided to make peanut-butter fudge for them all for Christmas, deposited in pretty little colored bags in the church kitchen. Well, you have to taste each batch to make sure it came out all right. That is called quality control.


I think my clothes still fit.

And the way I make fudge is not an exact science. I don't necessarily put in a known quantity of each item. I simply dump some in until it tastes right. That is what is known as "fudging."

You can see how, under such a scheme, it would be completely necessary to do a lot of tasting. And if it turned out that you had made a little too much, that has to end up in your refrigerator as well, and, well, you can't just throw it out. so...

There was also the raisin wine at the party, which was quite good, and of which I only had enough to make my cat slightly drunk.* On me, though, it produced a strong headache the next day.

We went home to the relatives after Christmas, and practice the art of decimation on the cookie population. In the less strict sense of the word, of course. I did not only eat one in every ten cookies and leave the rest. But who is keeping statistics?

Well, for reasons of diet or stress release, or just that the good holiday vibes have finally kicked in a little late, or because it's frickin cold outside, I'm not inclined to do much of anythin
g today. So, Hyber-Nation, let's all retreat to our caves and...

You say you have to work today?

That's too bad. I usually write these blogs about a week in advance, and today is the day after Christmas and I'm more than a little listless, but I suppose future me will have managed to dust himself off and leave the cave and get to work, too. There is something nice about a fresh start.

Let's keep telling ourselves that.
-----
*hypothetically, of course.
Posted by michael at 8:00 AM