And a very merry Christmas to you at last! 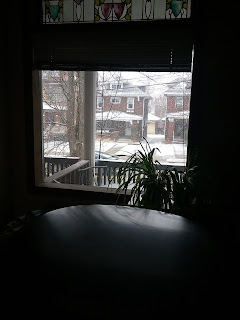 This year, I've observed to persons in my immediate environment, has been probably the greenest Christmas in my life.  In addition to not snowing on Christmas Eve or Christmas Day, the white stuff seems to have avoided the season completely. To the best of my recollection it snowed in Pittsburgh a few times in November, accumulating nicely, and remaining on the rooftops of the neighboring houses for a couple of weeks, and possibly as late as the first week of December. Then, nothing. From the time we put up our tree on the 6th of December, until the day before we took it down on January 12th, there wasn't a bit of snow.

Winter has returned this week, and we may even be due for a foot of snow this weekend.* This may partially account for the strange occurrence of my being able to write Christmas music in the off season. There have been several years when I vowed to finished pieces I hadn't managed to get written during the busy time of December and once the demands of the new year came these projects got squeezed out. But this time, somehow, a few things have gotten created. I have to work in between the cracks of other, more pressing projects, but as I have often noted, a multiplicity of things to do doesn't just make it hard to focus. It can also be imperative. The most important and deadline sensitive things I have going on these days wouldn't be possible to finish on time if I hadn't spent time and effort in earlier days getting some of the work done before I knew how important it would be later.

This is particularly true of composition, which, among many favorite similes, is a bit like fishing. You can't catch fish on demand. You can set yourself up for success by finding places the fish like to be, showing up at the right time, using a good lure, asking people where they've had success, even using a fish finder. But that's no guarantee that a particular cast will catch anything. So when, through a series of events, I slept poorly, and woke with the genesis of a piece of piano music in my head, I thought I'd better catch it while I could. It will come in handy next year when I need something to play for a particular occasion and it is already in my boat, waiting.

Since it is snowing outside I thought you might be in the mood for a little bit of Christmas music, if it is snowing where you are, and if you've also had to wait a month for it to do so. I don't normally share pieces I've written yesterday--this is the beta version, and I don't guarantee there won't be revisions, but it was easy to write down and so easy to play that I got it recorded quickly, before the storm that is on its way.

Enjoy. Or should I say, Rejoice!

[listen to "In Sweet Rejoicing"]

*as of Saturday afternoon, the snow has entirely dropped from the forecast in favor of rain which has not been seen so far, either.