You have my sympathy

Sometimes, before I gave a new student his or her first piano lesson, I would get up from the bench and look at the keyboard this way: 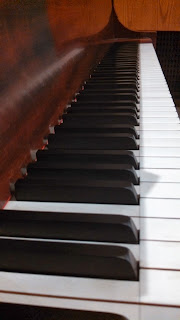 That wasn't just to get a different perspective. It was because from that angle the keys dissolved into an ocean of identical looking plastic levers, an endless horizon of black and white. Viewed from the normal direction I cannot help feeling that each key is different from its neighbor--I don't just see keys anymore, I see a cotillion of individual keys, each of which somehow looks different from the others. It is as if all the Cs are a different color than the Ds and the Es. I am instantly at home and instantly know how to find my way around. A new student, of course, does not, and it is good to remind oneself of what that must feel like every now and then, and to be intrigued by the possibilities, as well as a little daunted by the unfamiliarity. It is an exercise in disorientation.

There is more than one way to achieve such disorientation, however. Last week I started work on a contemporary sonata for trumpet and organ. The concert is under just under a month as I write this, so I basically tried to come to terms with the entire 28-page expanse in four days. It was an experience.

The reason I am writing about it is that, for the last three weeks on the Wednesday portion of this blog we've been talking about the importance of seeing music--of understanding music--in groupings, in whole words and phrases, as both an aid to interpretation, and as an aid to learning. First I offered an apologia for why this is very necessary, and then some brief examples on how one goes about doing it. It has become instinctive for me, but it is noticeably not that way for many of us, and when it isn't, the playing suffers by at the least being uninteresting, and in some cases, rather incompetent. (The first three parts of the series are here, here, and here.)

Having offered advice, which, depending on your skill level, might either seem self-evident, revelatory, or daunting, I'm going to take a detour from the practice of finding such patterns in the music to offer some personal experience with the musical equivalent of flying blind. This is because the internet offers such a large and completely unsorted audience, from all kinds of backgrounds, which means that there is always the possibility that, in the midst of what I hope will be helpful hints toward the furtherance of an individual's journey, what will happen instead will be some head shaking and the phrase "easy for you to say." In other words, I've built up a lot of different skills over time and they work together well to allow all manner of playing difficult music in fairly large volumes, and the human tendency to expect such results without the same work over the same length of time might lead to a good deal of frustration and the sense that what I am saying is not particularly relevant to you. In such a case, consider this a bit of empathy.

One of the things that makes it easier for me to learn a piece of music is the ability to understand what musical materials the composer is using. Information like the key signature isn't just a fact to be known, it tells me what to expect in the piece to come in terms of the feel of the key's hills and valleys, or the rise and fall of the melodic patterns. If I can see what harmonies are present in each measure, I can even fake parts of it if I don't get the page turned in time, or my sight reading skills fail to provide me with all the detailed information in time. I can paraphrase if I forget something while I'm playing from memory. But my memory is in turn strengthened by the ability to hear the piece in my head and to be able to reconstruct it from the recording that is playing in my head--in other words, I can play by ear while I'm playing my sight (reading the notes in front of me) or playing from memory. And I improvise, which means I can fill in any information that fails to come by those means by simply making it up until the crisis is safely past. This sort of redundancy is like having four engines on a plane making a transatlantic flight. If one fails, you still have three to fly with. If two fail, you still have two left. Vastly different musical skills compliment each other.

But consider the problem of learning a largely a-tonal composition in a few days. There are no predictable scale or chord patterns in such a piece. Instead, the composer seems to like to play a D major chord in one hand with an F natural in the other. Or a G# will be present in the right hand, with a G natural in the other, and a G-flat in the feet. Such discords cause two problems:

One is that I have been training my hands and feet to "think" in traditional harmonic patterns and they instinctively avoid notes that are dissonant. The advantage is that even when I'm totally guessing at notes because my brain isn't working fast enough to properly read everything I'll still fill in with something that sounds harmonically acceptable. That is a large part of the reason some people think I don't miss any notes. I miss more than they might think, but most of them don't even sound bad. It's a nice habit to have built up over time, but in this case I have to virtually rewire myself to be able to play what is in the music.

The other is that wrong notes don't sound any more wrong than the right ones, which means it takes longer to figure out whether I'm playing the right notes since I can't hear them right away. It took me several days to be able to tell when I was playing wrong notes. This was an advance--even though I was still making errors in practice, at least I could tell! I'm not used to having to wait several days for this to happen. Granted, if I could "sight read the shit off fly paper" as one colleague memorably said about another when I was in grad school, I might not need to rely on those other skills as much. In this case, pattern recognition is, at first, getting in the way. Until I learn the new patterns.

The long and short of this is that I basically had to play each musical gesture a large number of times in order to "get it under my fingers." The principle way this occurs when your ear is not able to help you "hear" each gesture is by feel. You hands have to memorize the feel of each chord, its special topography. This is a slower way to learn, but it eventually works. I still recall the summer I spent before my junior year of college trying to learn a Scriabin sonata entirely by memorizing the feel of each chord, each gesture. The harmonies were at the time way beyond my comprehension: I could only come to terms with the piece by sheer repetition. Even at the recital I was frightened of the piece and was playing it with the sense that I could only get through it by remembering each detail from force of habit. These days I would understand and recognize the patterns used in the piece and would be able to breathe much more easily, and to even paraphrase if I got lost (which, in turn, makes it less likely that you will get lost in the first place--funny how that works).

Muscle memory is an important way to learn, but I find it works much better if it is accompanied by the ear being able to recognize each musical element by the sound of it. That way, when you are away from the piano or organ, you can perform the piece with your ears closed by both seeing yourself perform it, feeling the keys beneath your fingers, and hearing the sounds. If all three of those things are in working order, you are ready to play the piece. Not to mention you can still get in practice time on an airplane.

Not being able to do all of these things, or to integrate the various skills, makes learning that much harder. I got a reminder of that last week when I began work on the sonata. It was like doing a bit of time traveling, back to a time when those skills were less developed, my musical understanding much less keen. This was in college, mind you. Every year since I've graduated I've improved in some direction. Working hard and working smart will do that. But suddenly, a different sort of musical experience will throw one back on his heels, and some of your assets actually become liabilities, or are at least canceled out. It can be frustrating. And even that can be helpful in its own perverse way.

First, it helps to refine my empathy skills, and to be able to say to musicians who have not developed either their ear-training/hearing/playing by ear skills or their sight-read like heck skills or their instantly memorize anything I come across skills, I understand. It's a long process, and a difficult road at times. But the more you are able to do these things the more time you will save in the long run and the more time you will have to actually make music and enjoy life because you will spend less time being tripped up by the mechanics.

So let's say I've come back from the future to warn you. The time is now. It is always now. Do what you can to shore up you weaknesses, even a little at a time, because they will come back to haunt you. They always do. Bwahahahaha!