Attack of the blobs

The last two Wednesdays we've been talking about musical interpretation in terms of groupings of notes on the page: the importance of recognizing such groups, whether or not the composer has given you some visual device such as a slur to band them together, and have just started to explore how that understanding can be of use to you as a performer.

Last week I posted a recording of a short piece I played at my church last week. It was a piece by the birthday boy Johann Ludwig Krebs, who turned 300 on or near October 12. I'll give you a chance to listen to it again, and remind you that this is not at all how I actually performed the piece. This is an attempt to make obvious some of the groupings of notes that I used to make the piece clearer both to me and my listeners. In trying to make that abundantly obvious, I made rather large pauses between some of the groups and really pounded out some parts to show where my ear was going at that point. In the actual performance, the pauses would have been much shorter (if they were there at all), to be replaced by at best slight breaks between some of the notes, and perhaps a very slight accelerando in some of the note groups. In other words, I would be much more subtle about everything. I don't want my listeners to get seasick!

It was not such an easy thing to do on the fly, actually, but the point was that one should not get through even a line of music without a realization that some of the notes belong together the way some packets of sound belong together in a word, and that it is necessary, for reasons I'll elaborate on later, to make these judgments, even though doing so is usually an act of interpretation, since most composers are not so careful that they put slurs everywhere in their scores, or color code the notes that for them stand as a unit.

Then how to go about finding such units of notes? If there are rests on both sides of a bunch of notes, that seems like an obvious musical gesture, but what if there are no such markers? Well, in English, one often comes to an understanding of the value, or contribution, of a particular word to the overall meaning by the words that come after it. A preposition, for example, means little without a noun to go after it (into the......house.)   And in music, this context is twice as important. I've grouped this particular batch of notes into a unit

because right after them come this group of notes

which is, of course, a sequence. The notes from the first example have been repeated beginning a step lower. And in the following case we also have a kind of repetition: 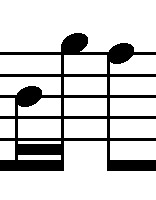 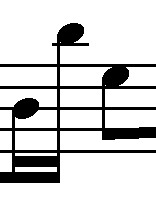 The only real activity, or movement, between the two groups is that the last note of the first group, the F#, has descended to an E at the end of the second group. There is thus, as there is so often, more apparent activity than there is actual activity. Most of the notes are simply holding place, and one of them is actually moving the musical line somewhere.

Repetition of some kind (complete or partial) is very important in most kinds of music and is an important indicator of musical "words." This appears to be a special, or at least more emphasized, quality of music, although it can exist in spoken words. My wife reminded me of that moments ago when, in preparing a poster for a conference at which she is presenting an academic paper, she referred to "little miniature" pictures adorning part of it. The two virtually identical adjectives are not necessary, of course, but in spoken English people often form redundancies because they apparently do not feel that one word of description is sufficient, that the moment is over too quickly if it is not made manifest through the use of more words to hold onto the significance of the phrase: a musical quality imported to spoken English.

So what is the benefit of all this? One does not necessarily create pauses between the groups of notes. One merely acknowledges their existence. But in doing so, a few things can happen. One is that in practice, and then later in performance, we are thinking in larger units and therefore do not have to constantly be coming to grips with new information, note by note. Our brains are calmer because we appear to be thinking more slowly because it will take longer for the fingers to spool out all of the information in a single impulse of our minds. Anyone who can read silently faster than they can out loud understands this phenomenon. There is a practical application to this: if you temporarily panic on the stage and lose your place, by the time your fingers have finished saying what you had already told them to say (your mind will be several notes ahead) you may have recovered your equilibrium and gotten back on track without any noticeable interruption in the music. The same holds true if you can't quite manage to get the page turned in time: any pause that is created by having to take a second swipe at the page, leaving the keyboard briefly unoccupied, will be between "words" and will appear to make sense. In other words, you will have paused where a pause might be welcome anyway. Any person who is fluent in this idea will always complete musical gestures in practice and thus will, even in case of an emergency, never stop in the midst of a phrase, for the simple idea that any phrase will never be started unless you see the end of it: all the notes are one unified block of information in your mind. Your fingers will not stumble in the middle, nor will there be rhythmic hesitancy except between groups, and that already will make you sound more competent, even if you are having a bad day at the keyboard.