When I was in grade school I had in my possession a picture of the Goodrich blimp. The Goodyear company has been famous for their blimps flying over major sporting events all over the country, and this visible symbol was not shared by the similarly named Goodrich company. Apparently someone thought it would be funny to send out promotional postcards of their non-existent blimp: it was merely a picture of some clouds and empty sky.

Being a church organist places one in a curiously similar position: I have, on several occasions, tried to contact a church's organist only to find that there is no organist listed on the church website, or in the church bulletin. It is as if the organist is there, and not there. In many churches the organist sits completely out of view of the congregation as well, so nobody actually sees him or her. When I first came to Faith UMC I might be left off published materials listing our staff (the only one, usually) and might not be informed of decisions that had been made, even ones that directly affected my job. This wasn't done maliciously, it's just that many churches are used to pretty much leaving the organist out of their calculations. 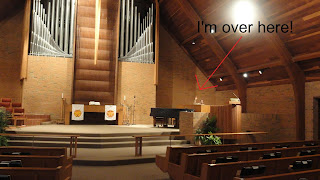 I'm pleased to report that that has changed significantly. Years ago I started attending staff meetings regularly. Both pastors expressed surprise that I wanted to attend; after all, their jobs consist of many a meeting, and I'm sure that any meeting that is not a job requirement seems like a meeting you wouldn't want to attend! But I found that it was an important way to know what was going on in the church, not to mention to find out when weddings had been booked, or some group would be using the sanctuary one morning and driving across town to practice the organ would be a waste of time. I remember reading the minutes of a meeting I hadn't been able to attend, stunned. The staff had decided to schedule a traditional service hymn sing for the same time as the contemporary service.  Someone had wondered whether the noise leaking from one sanctuary would be a problem for the folks gathered in the other, and they decided no, it wouldn't. What they hadn't considered was that the organist is also the keyboard player at the contemporary service and that meant I would be required to play both services simultaneously (I'm good, but not that good.....)!

These days, if the secretary is printing the bulletin a day early that week she contacts me to let me know so I can get my selections in before we go to press. If there is something unusual happening in one of the services the pastors or musical staff run it by me before hand so I know what's going on (even though we are all pretty good at flying by the seat of our pants when necessary). I'd say we've developed into a pretty close group.

I hear of or read about a lot of frustrations and frictions between organists and their churches, and it's sad. I think one of the reasons for that is a lack not only of respect, but of communication between parties. Often, I'll wager, the organist feels pretty cut off from the rest of the church. After all, we are often physically separated from most everyone else (the organist our church is about 30 feet away from the choir on the other side of the altar area and my office--the sanctuary where I practice--is on the opposite side of the building from everyone else's!), even to the point where it is impossible to see any part of the organist unless you are the organist! Sometimes they are up in a balcony  sometimes they are stuffed in the corner, sometimes they are in a completely different room (seriously, it happens).

Philosophically we are different people, too. We've probably spent thousand of hours in isolation in practice rooms learning our music (and continue to do that), we value music that most people don't listen to with any regularity, we have our own vocabulary, and a very different way of looking at things. The chances of feeling cut off from the rest of humankind multiply!

I offer no magic bullet for situations of estrangement between organist and congregation or organist and clergy; but I suggest trying to bridge that gulf. Hymnologist Erik Routley concluded one of his books with an exhortation for pastors and congregation: talk to your musician! If you are an organist, try to develop bonds with the rest of your church. Be there a lot! (I make sure to take practice breaks and walk down to the other end of the building to see people; a lot of business gets concluded there as well).  If people know and like their organist they are more likely to put up with a few offertories they weren't planning on listening to (that blasted Bach fellow again!). If the rest of your staff feels like you give extra effort to help them out and support their projects they are more likely to back you up when needed. It's about simple human relations.

This sort of transition could take months or even years to accomplish in full, a step at a time--but it is worth it. It requires patience and perseverance--two things a gifted organist ought to have plenty of just to have gotten all of that musical expertise in the first place. In the meanwhile, if you are a frustrated organist who feels like your church doesn't understand you and they are making your job difficult, let me extend you my sympathy. I need to remind you that you can only control one part of that situation, and recommend the position I've outlined in the paragraph above. But in coming weeks I'll outline some of the grievances that organists have about their situations, and perhaps you can get a sympathetic clergy or congregation to read those posts and begin to understand things from your/our point of view. It seems like a worthy mission. I only hope I can do it adequately.
Posted by michael at 8:40 PM