The 13th Day of Christmas 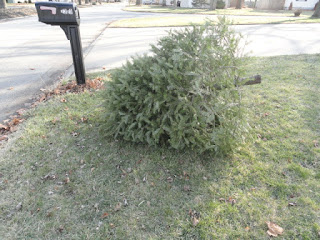 You may have noticed that, on this blog, it's still Christmas. You may be sick and tired of it by now and wish it would just go away. And yet, here am I, with my tree still up (that photo is from last year), my website still filled with Christmas music (last day to listen to the pianonoise Christmas program, by the way), and yet another Christmas selection to throw at you.

Two reasons for that. One is that Christmas, as a religious holiday, actually extends through January 6th, the proverbial 12th day of Christmas (remember that song we love to hate? and believe me, I'm with you and that one). It also doesn't start in mid-September, which helps its staying power a little. In fact, having limited exposure to a shopping mall this year and watching no television might be the reason I don't mind extending the holiday to mid-January. True, I'm getting a little tired of it by now, but I'm not completely sick of it yet. In fact, this is the first year I can remember going the entire holiday season--all three months of it--and not seeing a single one of those commercials featuring luxury cars with bows on them. It's very exciting.

Not having to spend November fighting off holiday commercials really helped. But then, in addition to the aforementioned twelve days, we should add another one. If you happen to be from the Eastern Orthodox tradition, as is a student of mine, Christmas Day is actually today. That's because, a couple of calendrical revisions ago, December 25th would have been on what is now January 7th, at least according to the new-fangled (8th century) Gregorian calendar. But hey, what's the rush, anyway?

If it were up to me, Christmas would be later anyhow. One of the important things about Christmas is that it is very helpful in terms of human psychology. We take the darkest, coldest time of year (if you happen to live in the northern hemisphere) and introduce bright lights and eggnog and try to cheer ourselves through it all with parties and Christmas cheer. If you rush through it all, using it up before January, you are left with a long, bleak winter, and no lights and no holidays. Sure, technically the days are getting longer, but they tend to get bleaker for another month or so, don't they? So why not just save Christmas for a little? One word: merchandising. Everybody trying to get the jump and everybody else to make our economy hum, and the next thing you know, Christmas combines the festive flotation of Ramadan (a Muslim holiday which gets a few weeks earlier every year, but ENDS earlier, too) with the mind-numbing custom driven requirement to hold to the same date for the official celebration, no matter how tired of it we all are. But hey, if we keep this up, starting the holiday season earlier every year, eventually our friends in the southern hemisphere will be able dash through the snow in one-horse open sleighs for Christmas, too.

So I have one more short Christmas piece for you. It's a piece by Dietrich Buxtehude, and it's based (loosely, you might think) on "In Dulci Jubilo." It does bring to mind Albert Schweitzer's comment about how, in some of the pieces Buxtehude "tears the melody in pieces"--you might be able to hear fragments of it if you listen carefully, but if not, enjoy the sound, the harmony, and the musical enthusiasm of those little dancing sixteenth notes you come across every so often.

Buxtehude, by the way, was a busy guy. In addition to being the organist at St. Mary's he was also the church administrator. That would be like having Doug Abbott, our Director of Church Administration, and myself being the same person (although then you'd end up with a Dietrich Buxtehude who also played electric guitar).

For the last time this year, Merry Christmas. I hope it's been a joyful season. I promise I'll sober up and get started with the new year by Friday.
Posted by michael at 6:00 PM