The pipe organ is a fascinating instrument with a very long history. Today, a very thumb-nail sketch of the history of the organ as used in the church.

Organs have been around since the 3rd century B. C. when a Roman named Ctesibius attached a set of pipes to a box with some keys (note: not a remotely professional description of an organ) and, behold! The one-rank wonder was born.

Ctesibius's invention involved using water power to move the air through the pipes (a "hydraulis"); later on, pumping bellows was found to work better. Apparently, rich Romans liked the invention enough to play it at home, a specimen of which is pictured below: 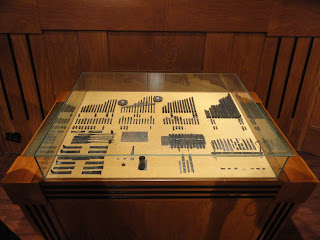 (This organ, at a museum in Hungary I visited this summer, was dedicated to the local firehouse after its first player, the purchaser's wife, died. Unfortunately, the organ burned along with the rest of the town a few years later and only the metal pipes are left. Yes, you read that correctly: it was housed in the fire station at the time of the fire.)

Poor Romans also found a use for it: as part of their festivals, thus associating the organ with the Roman circus. Unfortunately, when the fledgling Christian church came into being, the pipe organ was therefore NOT on their list of favorite instruments. For over a thousand years, the organ was not sounded in any parish. This might seem odd to people living today, especially when (as the Catholic Encyclopedia notes) "the organ has the special blessing of the church."

It only took about a thousand years for them to get over their antipathy.

But in case, dear reader, you think I am being unkind toward our Catholic brothers and sisters (please don't; there are plenty of things to admire, and plenty of blame to extend to everybody), Protestantism got the next crack at such simple-minded associations, when, only a couple of centuries later, they decided that the pipe organ was too Catholic! (That would have been funny if only they had known....)

You may have heard that, for a few centuries, Protestants and Catholics didn't exactly get along real well. In case it looked like the two faiths two closely resembled each other, Protestants would smash statues, ruin art, and destroy pipe organs.

A couple of centuries later, at least in some parts of Europe, the organ managed a comeback.

These days it seems to be alive and well and hanging out in a church near you. Of course, there are many people now who like the blame the organ for everything that is wrong with the church (after all, it's much easier that way). The standard complaint now, I gather, is that it is representative of all things old and old-fashioned, and that it scares little kids. Thus it needs to move over for the drums and the guitar.

I'm going to look like a heretic to some of your organists out there, but I actually play in the contemporary service at our church, along with the drums and the guitar. I really don't think the roof will cave in because we've invited some other instruments into the church, or even other musical styles. So don't plan on me saying anything negative about "contemporary" services. I will, however, defend the "old" organ.

The organ is an amazingly flexible instrument. It has a lot of sound possibilities and a lot of ways to combine them. It can be extraordinarily loud or as soft as a whisper. It can inspire awe and even terror, or comfort and soothe. It can play quickly or slowly, with dignity or humor; it can entertain, or facilitate worship.

It is a pity that the early church didn't see these possibilities at first; it could have spared a lot of sad history. True, the organ didn't have all the permutations it does now; but a person with vision could have said "sure, we hear it at the circus, but what else can it do? What if we used it differently? What would it say to us?"

Instead, people knew what they heard, and that was it. And out of it came an argument that sounds an awful lot like what you'll hear today from people who have only heard what sounds like an organ at the beginning of "Phantom of the Opera." The organ is only meant for horror movies...

I go on a lot of websites devoted to recent movements in the church; younger people who are doing exciting new things in their respective denominations, starting new churches, inspiring new thinking, and so on. Unfortunately, I have to wince when I hear comments about organs and organists which seem to be universally negative. In many cases the organ is standing in the way of progress, apparently.

One fellow suggested that he'd love to get rid of the organ at his church and replace it with a drum circle.

I thought....Ok, you want a drum circle? That'd be cool. It would be hard to lead hymns without somebody who could play a melody (trust me; they'd sing all their old favorites alright, but throw a new one in there and...) but what the heck.

But does that mean we have to throw out the organ completely? Isn't there any room for all that getting-alongness we're supposed to be doing?

I'd play a piece for organ and drum circle if somebody would write one. And if we could get all those people to show up on Sunday with their drums. Maybe I'm a little outside-the-box.

It's a lot easier to ignore history and think that whatever you happen to be doing right now is it and the rest is useless. Maybe the best reason to keep the organ around is that, with its long history, it reminds us that we are not the center of the universe, and that there are many persons who have gone before us.

I have to get going now to practice some music for Sunday. It's....

only about twenty years old, and the composer is still alive.


Hey, it happens. The tradition is not dead. It lives. But it is a tradition, after all.