One of the joys of playing the pipe organ is that each one is unique. That is true for pianos to some degree as well: each well made piano (particularly Steinways) have a unique sound. Last summer I had a chance to play the "Mr. Rogers" piano when it was still at WQED across from the studio where the show was taped. As I sat down at the piano I thought I'd play a little Mozart, but then suddenly "It's a Beautiful Day in the Neighborhood" and the trolley theme came out. It was surreal, because it sounded so much like what I'd heard coming through my television as a child. It was the same piano, playing the same music. It was like recognizing a familiar voice.

Pianos aren't always that easy to adjust to, however. The action can vary considerably, meaning it might be a lot harder to get the keys to go down. In other cases, you can practically just breathe on them. One of the scariest moments of my career was sitting down at an unfamiliar piano on which I had had no opportunity to rehearse and having to begin the concert with a very very very soft chord which I had to calibrate just right by sheer guesswork. I am happy to report that on this occasion I got it right, and the atmosphere was set for a very nice recital.

With the organ there is an entirely new dimension, however. The very sounds the the organ makes can be different. There is that standard family of sounds: foundation stops, flute stops, string stops, mixture stops, mutation stops, and so on, but they may be grouped differently on each manual. There may only be a few of each type, or a whole lot, depending on the size of the organ. The logic behind grouping those sounds, and getting the organ to do its best for you will change as well, dependent on the builder and their philosophy of sound, as well as the era in which it was built or the country of origin.

That can make things a challenge, but it is also a great deal of fun if you like variety. It will also mean that certain pieces sound best on different organs. 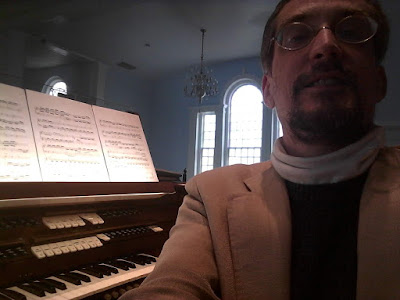 Today I paid a visit to Glenshaw, which is a small community northeast of Pittsburgh. I'll be playing on Monday's chapter meeting of the American Guild of Organists. The theme this time is "free and easy" meaning stuff that you can find online at the International Music Score Library Project (IMSLP.org), and that can be played on next to no practice. I didn't really need to go up there to practice for such a simple performance--about a dozen of us are playing one piece each--but it was an excuse to get to know the organ and see what it could do. I got to spend an hour with it this morning. I also made a recording of the piece I'm playing on Monday so you can hear it as well.

I had already recorded this on my "home" organ (at the church where I regularly play), but this organ, while smaller, really holds its own. In fact, I suspect this is closer to the kind of "harmonium" instruments that would have been a part of the composer's 19th century America, and most often performances would have taken place on a similar sounding instrument in a similarly dry acoustic. Hurrah for authenticity!

Next week I'll post something else I recorded that really puts the organ through its paces and shows what all of the stops sound like.
----
to see what else the "pianonoiser" has been up to this week, go to www.pianonoise.com
Posted by michael at 2:00 PM