Last week I set up shop at a friendly little pipe organ north of Pittsburgh in the community of Glenshaw. Today I'm going to let you hear something I recorded on it, entirely gratuitously. I had just decided a day or so earlier it might be worth learning and recording a festive little piece by Samuel Scheidt known as Bergomasca (named for a region in north Italy whence came a rather addictive chord progression and a dance based on same). Since I like to let the voices of the various organs I come across in my travels speak for themselves whether I give a full concert on them or not (as in this case), I suddenly realized that this might be a nice test piece for said organ. So rather than playing the whole thing on a pleasant four-foot flute stop, I thought that each of the 21 very short variations should have its own sonic combination.

Now given that I had barely even learned to play the piece (I think I'd practiced it for maybe two days) it was an additional challenge to deploy the stop tabs every 8 seconds (I told you the variations were short!) but I took the challenge with no premeditated plan. Also I played the piece three times for even more variety. I was going to post them all, but then I decided that you have places to go and that even one listen is pretty indulgent of you.

So here it is. I realize a video would have been much more entertaining, but if you listen really carefully you just might be able to hear little blips between the sections when I am hastily depressing the stop tabs while thinking "hmm, this looks like a good combination"--like I said, I did not do a whole lot of preparation. Enjoy! 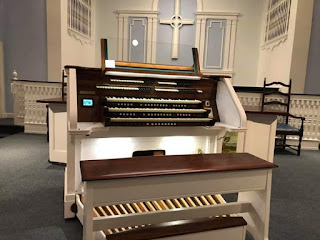 and for additional stimulation, this week's edition of www.pianonoise.com awaits.
*the title is a weird reference to a Dr. Who episode. If you were thinking I'd lost my marbles, why yes I have, thank you.