Rosamunda is a year older.

We have no idea when our fine feline friend was born, but we do know that we adopted her on May 22nd, 2018, so we celebrate that as adoption day. That is her special day.

You would like to know how she spent it? Lounging in a chair in the sun, taking occasional tongue-baths, hunting for all things to play with, chasing her toys when we threw them, and in the evening there was a brief and exciting encounter with a fly which nonetheless eluded her. Perhaps it will furnish a protein snack on another day.

Her predecessor often got a ceremonial saucer of milk which he either drank or did not drink. If he drank it we had six more weeks of summer. Or maybe it was the other way around. His "birthday" was in July so it was a pretty safe bet either way.

In the year in which she has been with us Rosamunda (who started out as "Rosie" at the shelter, and then I started dishing out the fancy derivatives and one of them stuck) had undergone a dramatic change. She was four pounds under weight and missing half of her fur. Here is her before picture: 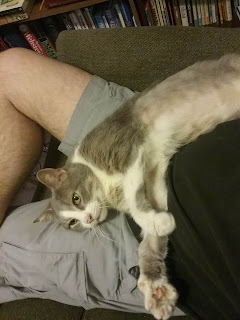 It took her about two weeks to stop hiding behind boxes in the basement and wander the house freely. But even in the early days she was a snugglepuss. The first day we met, I put my hand in the cage and when it touched her fur she began to pur loudly. Then they got her out and set her on my lap. She stayed on it, purring away. It was pretty clear this was our cat.

Now she's gotten pretty comfortable with the routine. It is true that she ate herself back to full weight and then some and we had to put her on a bit of diet. For some reason she doesn't bother knocking glasses off of counters or eating houseplants, two of her brother's obsessions. And she'll sleep with us whenever we let her (which is not on "school nights" because she wakes Kristen up jumping back on the bed after her snack break at 4 in the morning) and follows us from room to room to be with her people.

These pictures are from the other day. 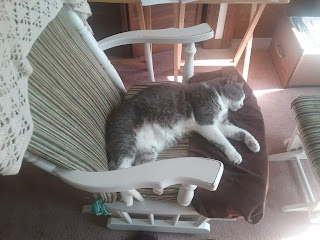 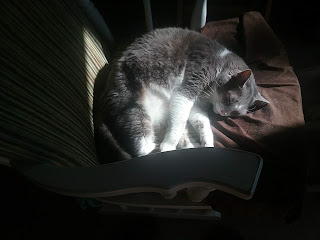 I could of course bore you with many more (and certainly will) but you are no doubt gushing copious amounts of tears at how cute our feline is sleeping and I think it is only merciful to let you off the hook for now.

Rosie had some tough shoes to sniff but she is doing her best, which is really terrific. And her humans love her.

Email ThisBlogThis!Share to TwitterShare to FacebookShare to Pinterest
Labels: Rosie