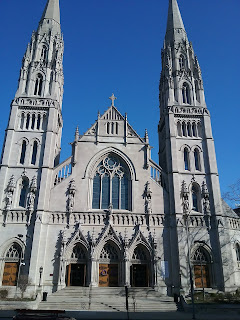 My fingers are tired.

Usually the answer is no, because I practice several hours a day, and when people wonder after a one hour concert if my fingers are tired I explain to them that one hour is not very long for me to exercise my digits on an average day. But yesterday I did quite a bit of practice. In the morning I remember a period when, sitting at the organ, I was pushing my fingers pretty hard into the keys. From a musical standpoint there is no reason at all to do this, but it felt right to be confidently releasing my fingers into the keys as I sought to connect the muscle moves with my brain while assimilating the music. It seemed to fuse the connections, make the music mine. I had a piano teacher who suggested I should practice forte while learning.

Still, fingers are muscles, and you have to give them a rest sometimes. I would be doing that now, but unfortunately, typing a blog also takes finger activity. I am not wealthy enough to be able to afford additional sets of fingers I can dedicate to one activity or the other. It would be convenient, though.

So I'll keep this one short, and simply announce the reason for my excessive dedication. I have several concerts this summer, two of which are at the organ and in the Pittsburgh area. One of them is at St. Paul's Cathedral on July 14 at 3:30 p.m. Being a relative latecomer to the organ means that despite playing all the most difficult literature and having given several organ concerts in recent years, I have never given an organ recital in a bona-fide cathedral. It's exciting. It is a great place to play, and a great instrument. I've been to several concerts there before and now I get to give one. Yesterday I finally figured out what I'm going to play on the entire program. For weeks I had the beginning and the end and wasn't sure what to do with the middle. 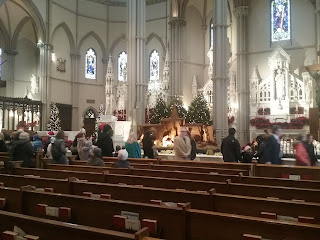 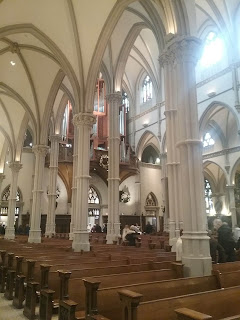 It will consist of several short pieces. Recently I played a program of a few long pieces and I've decided to go back the other way. These are mostly 5 minutes each. They come from Germany, Italy, Spain, Lithuania and France. There are four centuries represented. Some of them are very loud, others on one or two stops only. The organ (this one particularly) has quite a few coloristic possibilities, and I will be trying to exploit nearly all of them! I think it is a program that will be very friendly to people who are not sure they like organ recitals. And it's free. So bring your friends: the cathedral seats about a gazillion people. I'll be up in the balcony; I'll try to wave occasionally.