An astonishing thing happened on the top of the piano I was playing carols on for the folks at the retirement home. Ordinarily, you'll recall from my ten part series on the subject of Pastorals and shepherds, manger scenes tend to really emphasize the three kings, despite the Bible being silent on their number, and not calling them kings in the first place. They also only feature a single shepherd, even though there were "shepherds" [plural] "abiding in the field." This noticeable trend continues with our own church's scene as well as the one outside at the cathedral up the street. But on this piano I got a surprise. 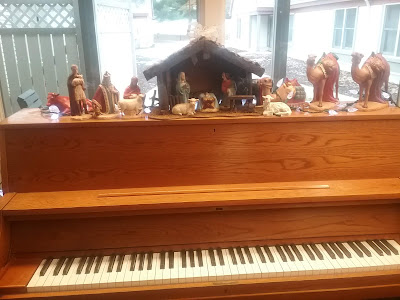 It isn't just that there appear to be two (gasp!) shepherds: those figures on the far left flanking the king. It's also that there seems only to be one king. Since there are three camels on the right, I wondered (aloud) if that meant the shepherds got to ride the other two camels. I'm sure they have tired feet from all those years of standing at work all day and would appreciate it. Nice people over at that retirement community.

At any rate, this gives me a chance to introduce this year's entry into the pastorale derby, a charming if harmless little number by a fellow named Edwin Lamare. Mr. Lamare's piece came to my attention because a retired organist sold his collection to our former organist and it is now in the music office. I saw it, thought it looked like fun, and wanted to learn a few things about Edwin Lamare.

He was an English organist, but actually spent a few years here in Pittsburgh, as the organist at the Carnegie Music Hall, presiding at the organ which is now in disrepair. Somewhere online I came across his first program in Pittsburgh, from 1902, which happened to include this very piece. In another online source I can't find anymore was the story that his wife (I think he was on wife number three at the time) didn't care for the climate and wanted to leave. She got her wish in 1905. He next resided in Australia for a while. Mr. Lamare played thousands of concerts. He had a formidable technique. One of the things he occasionally liked to do is a trick known as thumbing down.

In the organist's version of this bit, nobody dies.* All it means is that, while playing one melody with the fingers of your hand, you let your thumb drop to the manual below it, and play some notes with your thumb so that you can make two distinct types of sound with one hand. The music in this section is printed on four staves, one each for the left hand and feet, and the other two for the right hand on both of its manuals. 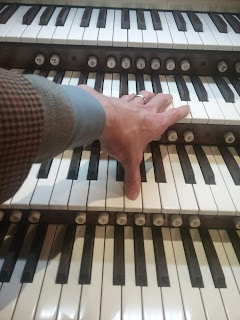 The thumbing down bit occurs during the middle portion (:57) and is particularly tricky at (1:49 to 1:56) where, for two measures, the thumb is basically playing its own melody against the other fingers.

Otherwise, it's an innocuous little thing.

-----
*I'm referring to the custom of persons at the Roman Coliseum of determining the fate of gladiatorial combatants by displaying thumbs up (he lives) or thumbs down (he dies). I think they have something similar with Youtube videos now.