You may never have heard of him. If so, don't feel bad. 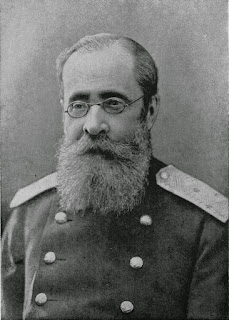 Cesar Cui, one of the "Mighty fistful" of Russian composers in the 19th century, is mostly known for his invective. He had a day job as an army officer (military engineer). The one place you are most likely to run into him is in the program notes at a concert in which Rachmaninoff's Second Piano Concerto is being performed. The reason is that, prior to writing that work, Rachmaninoff had been in a depression for two years and hadn't written anything. This was caused by the disastrous premiere of his First Symphony.  Probably owing to a drunken conductor, the piece, which I've heard on recording and can testify is really pretty good, if not a masterpiece like his Second, went badly. Cesar Cui made a habit of writing strongly opinionated reviews in the newspaper. His famous line after that performance is that if there were a conservatory in hell, they would have given Rachmaninoff the prize, "so devilish are the discords he dishes up!"

Cui has had exactly a century to personally enter hell's composition competition, and doubtless is quite aware of the sort of discord its inhabitants prefer. He passed away in 1918. The world has not lacked for nasty music critics in the meantime, but it may be missing his unique musical voice.

If you were wondering what that voice was, I've got a recording for you. It is a very small piece Cui was commissioned to write for a magazine. I found it in an organ anthology which was edited by a person I've learned to find very annoying from previous experience. In this volume, the piece I wanted to play had been silently shortened by three lines, perhaps because the music got marginally harder there and the editor wanted to make it simple for amateurs. In any case, the piece did sound like it could have reasonably ended there; however, that is not what the composer had in mind, and it was not exactly ringing with integrity for the editor to chop out the ending without even telling us.

While I was looking over the collection I came across this little piece by Cesar Cui. I've never played anything of his and thought you and I might take a listen. I get the impression from some of the writing that Cui wasn't familiar with how the organ works (some chords that don't fit in the hands and/or feet and some balance problems). But aside from the general awkwardness is a nice, if melancholy, piece of music. It is just about the only thing he ever wrote for the organ (there might be one other piece, but now I can't remember).

While the rest of the world is celebrating Lenny's 100th birth year, there are some 1918 passings to take note of. This is one. We'll take the others in due time. Enjoy some Cui.

----------
check out the homepage this week at pianonoise.com. Learn how musicians function on a busy schedule, and answer the important questions like: did Shostakovich play tennis? And it's your last chance to hear the organ recital from Heinz Chapel on Pianonoise Radio.
Posted by michael at 8:00 AM