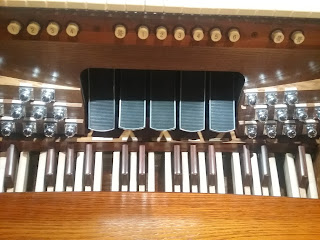 Last week I got another surprise. I'm in the midst of teaching a class on the organ, which includes miniature concerts, and as next week's class is on 19th century French literature (and includes a fun bit about the organ in popular culture; i.e., as an instrument of terror) I decided it was time to learn the Boellmann Toccata. This is probably the easiest of the many flashy toccatas I've already learned to play. I was expecting to have it licked in a day or two.

That didn't quite happen. One of the reasons for it was that it was trickier to memorize than I thought it would be. Although quite repetitive, the phrase endings are all different, so that it is like being on the same section of road and having to take a different exit each time.

Of course, I could have just gotten a page turner for the performance, but that would have meant that every day during practice I still would have to stop every 30 seconds to turn the page. Mr. Boellmann keeps the hands busy the entire length of the piece so there is no way to turn the page without stopping the music altogether. And the music from our church library looks to be from about 1920 and is quite brittle, so every time I did turn a page part of the page would come apart in my hand.

I did eventually get the piece memorized but it took about five days. Most of you are realizing how wonderfully impatient I am. If it had been a more difficult piece like the Vierne Final (from Symphony no. 1) I would have expected it to take a couple of weeks (it did, and that didn't bother me very much). I'm realistic enough to expect some things to take time; it was the mis-diagnosis that threw me. 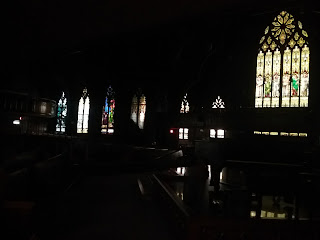 But there was another issue at hand, an issue of execution.  Once the piece was beginning to function as a piece of music (that is, mostly memorized: the actual playing of the notes while looking at them took very little time at all as the piece is practically sightreadable) I was still having a bit of difficultly getting the thing to work without any hesitations. And that came down to those pedals you see at the top of the page. Not the organ pedals, the several gas pedals. Those are the expression pedals. They make each of the manuals that are under expression (which does not include the loudest of the four) louder or softer according to whether you've got them pedal to the floor, or in the up position, or somewhere in between. The fact that there are four of them is rather new to me, and is a sign that I've got a pretty large organ console to deal with. Simply put, those pedals give the feet something else to do besides play notes and kick toe studs to change registration. Bach's organ didn't have them at all. They are an innovation dating from the 19th century. 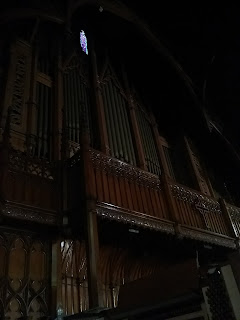 Being able to find the correct expression pedal and depress it quickly enough that the musical flow isn't interrupted and I can also get in all the pedal notes and registration changes is a skill in which I am not surprisingly deficient. It is one of the fun things about being an organist. The organ isn't really one instrument. Depending on the size and makeup of the organ it can demand very different things from you. One of the things I learned this week was the ability to arhythmically deploy the expression pedal and to scan the console to make sure that all of the indicator lights were where I wanted them to be, all while the fingers were on autopilot and the memory was feeding them uninterrupted information. If they weren't I would have to make another try as soon as one of my feet was free for a moment. Organists practice the same gestures over and over to make sure that they can play consistently and smoothly, but it is a fine skill to be able to make adjustments to a performance that includes gestures that you have drilled into yourself just in case something goes a bit wrong. And that seems to require dividing one's brain up into more and more pieces, each acting independently.

That may not sound like a lot of fun (it is if you get it right, I suppose) but I did actually have some. Because of a leaky roof, the lights were out in the sanctuary last week. That made for a rather spooky atmosphere as I took on this rather spooky piece. And yes, that is an actual shot of the view from the organ console, not some stock Hollywood horror footage.

I also made this recording you so can enjoy it yourself, in the dark. I'll know if you don't turn off the lights as you listen.