And when you're bad, you're awful

There are, it seems to me, two ways to make a positive difference in the world. One is to do something really well. That might, if it were a musical composition, or a work of art, or a figure skating routine, or a well cooked meal, bring joy to the beholders. It might also inspire them to reach new heights in their own endeavors.

The other way is to be really bad at what you are doing. This has the useful effect of making people who might otherwise feel nervous around you and your accomplishments feel relieved that, hey, that sort of failure happens to you, too, that you are a regular person after all, and that maybe they can, perhaps without even trying too hard, do a bit better.

I took the second path this week, and you're welcome.

Well, it wasn't on purpose.

A few weeks ago we had some foul weather in Pittsburgh and I was casting about for ways I might bring a class I was teaching to the people I was teaching on the chance that the snow and ice that was closing schools on Wednesday continued into Thursday and half the students (who are adults and drive themselves or take busses) couldn't show up. I decided to try to figure out how to go live on Facebook. I have a page (www.facebook/pianonoise) if you're interested.

I put up a video of myself playing the organ, and doing some talking to see if the microphone worked for both. Unfortunately you can't really test the system without broadcasting it to the universe (or at least the miniscule part of the universe that is interested). It wasn't a great video for various reasons but I got around a hundred views fairly quickly, which is more attention than most of my posts and recordings get. I thought about it and decided maybe I ought to find some way to do videos and embed them at pianonoise. People are far more interested in things they can see than merely hear. I've got plenty of nice recordings at pianonoise but a lot of them are gathering cyberdust because they aren't videos. So in return for the awful sound quality and the shaking picture, I'd get more traffic.

Then I realized that with the season of Lent coming up, it might be a useful discipline to try to improvise something on the organ every day until Easter and put that out live on Facebook. The only problem with that is that Lent lasts 40 days, which is a lot of daily improvisations. Also, I decided to do them at 8 in the morning, which is when my brain really isn't working very well, creatively or otherwise.

Well, it was supposed to be a Lenten discipline of sorts. And since it didn't involve sleeping on a bed of nails or taking a vow of silence or eating cockroaches on Fridays I'm probably not going to be sainted for it. But it hasn't been too easy. In addition to the vulnerability that comes with trying to make up something on demand in public that is half decent every morning for five minutes, it turns out I am a clutz with a camera.

I knew that already. But now so does everybody else.

The first couple of days weren't so bad. I started by lodging the phone between a couple of stop knobs at the bottom of the console. But my feet weren't visible. It was just my hands playing, close-up. So I tried something new. I got a music stand and put the camera on it, farther away.

Now when you do that you are faced with a problem, which is that you can't see what your camera sees. I thought I would turn the camera around, a la selfie-mode so I could see whether it was getting the organ into the picture, but when you do that it reverses the picture and when your hands are traveling to the right the notes are getting lower, which is disorienting. So I tried to reverse the reverse.

That was a really bad day. Something didn't take and I ended up with a seven-minute video of the front of the music stand. You could hear the sound but there was no picture. That was also the day that the video refused to embed in my website. Bad day all around. Later there was even some funny business with the security on my web site.

I had a really crummy improvisation or two right after that also. I'm glad not many people were watching (yet). 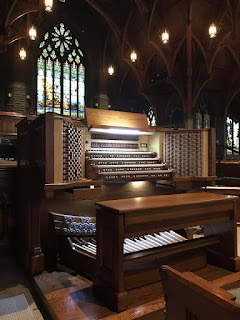 Next I decided I'd had it with close, error-prone camera work and decided to capture the whole vast tableaux of the church, complete with the massive Tiffany stained glass window that I can see from the console. It looks rather nice, and I may have even played decently. Yesterday I followed up this bit of good luck with another close shot, the first five seconds of which looks like an earthquake while I'm trying to get the camera to sit still at the right angle.

I've always found those first few seconds of amateur videos annoying. When I make audio recordings, I edit out that part when I'm running to the opposite end of the church or adjusting the bench or picking stops. But you can't do that with live video. Actually, maybe you can. I'm currently trying to find out if I could start the video a few seconds in. It might save some seizures.