Charmian and I (CCC part 6)

The parenthetical acronym in the title refers to the larger series within which this is an installment. That is "For Organists: changing the culture at your church, part six." I am off on an apparent tangent wherein I praise my colleagues at Faith UMC. Be patient; not only is it deserved, it will make sense to you later on. More sense. Some of it should be clicking already! 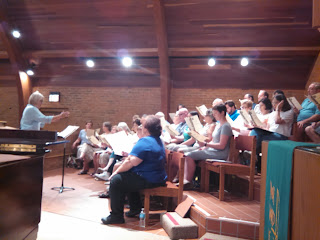 I don't relish job auditions normally. I imagine most people don't. But this one was different.

I was asked to play a standard hymn, which I could have done with my eyes closed (having difficultly with the requirements of the audition is not the issue). I was asked to improvise an interlude leading into the last verse, modulating to a new key. I did that. And as the last verse began, the choir director began to conduct, broadening the tempo. I followed. Next she happily announced to everyone in the room, "he takes direction well."  Thank God for Charmian!

It was my first encounter with Charmian Bulley, the choir director at Faith United Methodist Church, and it was a pretty good indicator. I've known her for over a decade now, and she is a very supportive colleague.

During that interview, she said a number of positive things about me, and once I was hired, that continued. When I was at my church in Baltimore, I had been the choir director and organist. Here at Faith, the position was split. Not having to wave my arms from across the chancel was helpful, but it also felt a bit like a demotion, since the folks who plan and who work with groups of people tend to form the "administrative" end--in other words, I basically lost the "director" title. (During a recent staff meeting, talking about my position, which may not to be filled in a few months, I described myself as the 'assistant to the everybody!' since I also work with the "contemporary worship director" but am not him either...) But here is something important to note about Faith. Technically there is a hierarchy, just as in any church. But like Doug and I, Charmian and I are really a team. We've got our areas, but ideas are welcome, and nobody gets treated like a subordinate.

A few months into my tenure, during Advent, I had an idea. I wanted to play a series of chorale preludes based on a particular advent hymn, one that we Methodists don't regularly sing. I wondered whether the men of the choir could sing the chant before the organ prelude, and the second week, the whole choir sing the chorale it became next. This would require taking some time out of choir practice. Now I had, of course, been attentive to our director all along--she runs rehearsals, chooses hymns, and comes up with many creative ideas for worship which I support--but here was a situation when I asked for something of her, and she was quite willing to do it. In other words, this was not a one-way street! That early situation stands for a number of other things she has been willing to do since, and of course, I hope I am returning the favor by helping her to make the choir sound good and lead effective worship.

Charmian is extremely patient. She works with a large group of volunteers, after all, and while they sing well and show up every week, some of them have occasional difficulty paying attention. If you've ever been the choir director and had this happen to you, you too should be up for sainthood: you want to begin at a particular measure on a particular page. You try to talk over the din about 5 times. A few tenors keep talking. You finally raise your hands to start the section and somebody asks very irritated, "where are we starting?!?" in the kind of voice that has the underlying tone of "hey, stupid, why didn't you tell us where you wanted to start before you raised your arms?" and of course you just did, over and over, and the person being snotty with you was talking over it. You aren't feeling very "Christian" at that point!

I didn't want to give the impression that every moment at Faith was beautiful. People are people, after all, and everything doesn't always go swimmingly. Sometimes the dumb organist can't find his music, either! She's always got extra copies.

Charmian is a lover of organ music, too. She sometimes asks that is "sound like a cathedral" on high holy days and enjoys me improvisations on hymns. It is always nice to have someone who appreciates the classical organ literature--most churches have very few of these folks, even though at Faith most people enjoy my offerings in general, but outside the Widor Toccata don't know much about the music I'm drawing from. Over the years she has made a few suggestions to me, just as I occasionally suggest hymns. Charmian has a few favorites, including the one I'm going to conclude with, which I most recently played last year when she had health issues, for aural support.
It's the

Prelude on "Rhosymedre" by Ralph Vaughan Williams, and it is "lovely."
Posted by michael at 8:00 AM

Email ThisBlogThis!Share to TwitterShare to FacebookShare to Pinterest
Labels: the visible organist