Improvisation on "What Wondrous Love Is This?" for saxophone and piano 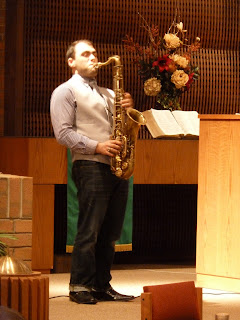 There are all kinds of ways to improvise, from tightly controlled to very free form. It's much like a conversation: someone can ask you a series of questions, to which you respond (like an interview) or it can be friends meeting over lunch--no idea what we're going to talk about, or what will lead to what. It's just shooting the breeze. That may be a bit too casual an explanation for what's going on here.

It's been wonderful to have saxophonist Robert Brooks in our congregation at Faith again this year. Robert got his Master's degree at the University of Illinois and returned to begin a Doctorate. Since he's a jazz major, he's hardly a stranger to improvisation, and he and I have "noodled" on several hymns previously. This past Sunday, given that the topic was "the love of Jesus" I picked a hymn for us to play at both services (as the anthem and offertory).

Unlike a lead sheet, the hymnal has no chord chart--and, although the full 4-voice texture does give a harmonic answer, I freely substituted my own ideas, without sharing them (or even thinking of them) in advance, so Robert really had to negotiate what he heard from the piano and adjust in the moment. We also did not discuss how many times we would play the hymn, how we would get from one verse to another, the overall form--anything. A minute before we played I suggested that he start the piece alone, which is apparently exactly what he was thinking of doing also. As I sat at the piano, I got a surprise.

Notice that Robert doesn't start with the melody. He's basically deconstructed the tune, and is playing free gestures. That was a fun revelation. It also meant the only way I was going to figure out when to come in was by listening and just going with it. You'll also hear how we responded to each other's dynamic changes, and how the melody alternated between instruments, or when we played it together, usually by slightly varying what the other was doing. Joining forces, pulling apart, trying to guess where the other was leading, trying the get to the ends of phrases at the same time (or stagger them)--it was improvisation without a net.

Afterward we had a brief conversation about it. Since I managed to record our playing at both services (notice Robert starts the same way both times but veers off after about 10 seconds and the result is quite different the second time) we wondered how the two performances would compare. We also imagined that people might appreciate the "authenticity" of being absolutely in the moment. After all, this was all being created on the spot with virtually no prior consultation. And of course people did appreciate it. Thanks, Robert.

Here are both of the recordings, from the early service, and the one two hours later. (My favorite is the second one; I think we had woken up more by then, and there is a bigger climax; though you may prefer the more introspective earlier version.)

-----
note: since the piano was on the other side of the chancel at 10:30 than it had been at 8, (so I could conduct the choir) the microphone placement is quite different at each service (and also had to be done hastily). Although the piano sound is less fuzzy at the second service, it also bled into Robert's microphone which unfortunately makes it louder than I would have liked at times. Ordinarily the piano would be turned the other direction (when our choir director is in town) and the lid wouldn't be open in the direction of the instrumentalist.