Here's something like a Scud missile in the world of controversy:

I have definitive musical proof that Shostakovich loved to play tennis.

That statement amuses me because it contains some properties that should make it a big hit out in the wide world. It is quite sure of itself, which is important when you want to stir up a lot of notoriety, and it is so bizarre that it ought to provoke curiosity.

On the other hand, it involves someone whom most people have never heard of (Shostakovich) and a game most people regard as dull; therefore it is pretty irrelevant, popularly speaking. Hence as an attempt at publicity it is about as effective as a scud missile, where said missile is the butt of American jokes because they belonged to our enemy, and were, apparently, less effective at killing people than our own. My apologies to the people who actually died from these projectiles.

But if you'd still like to know how I came to my doctrinaire thesis (which I've already saved my colleagues the trouble of discrediting, having proceeded directly to step two and done it myself) read on. 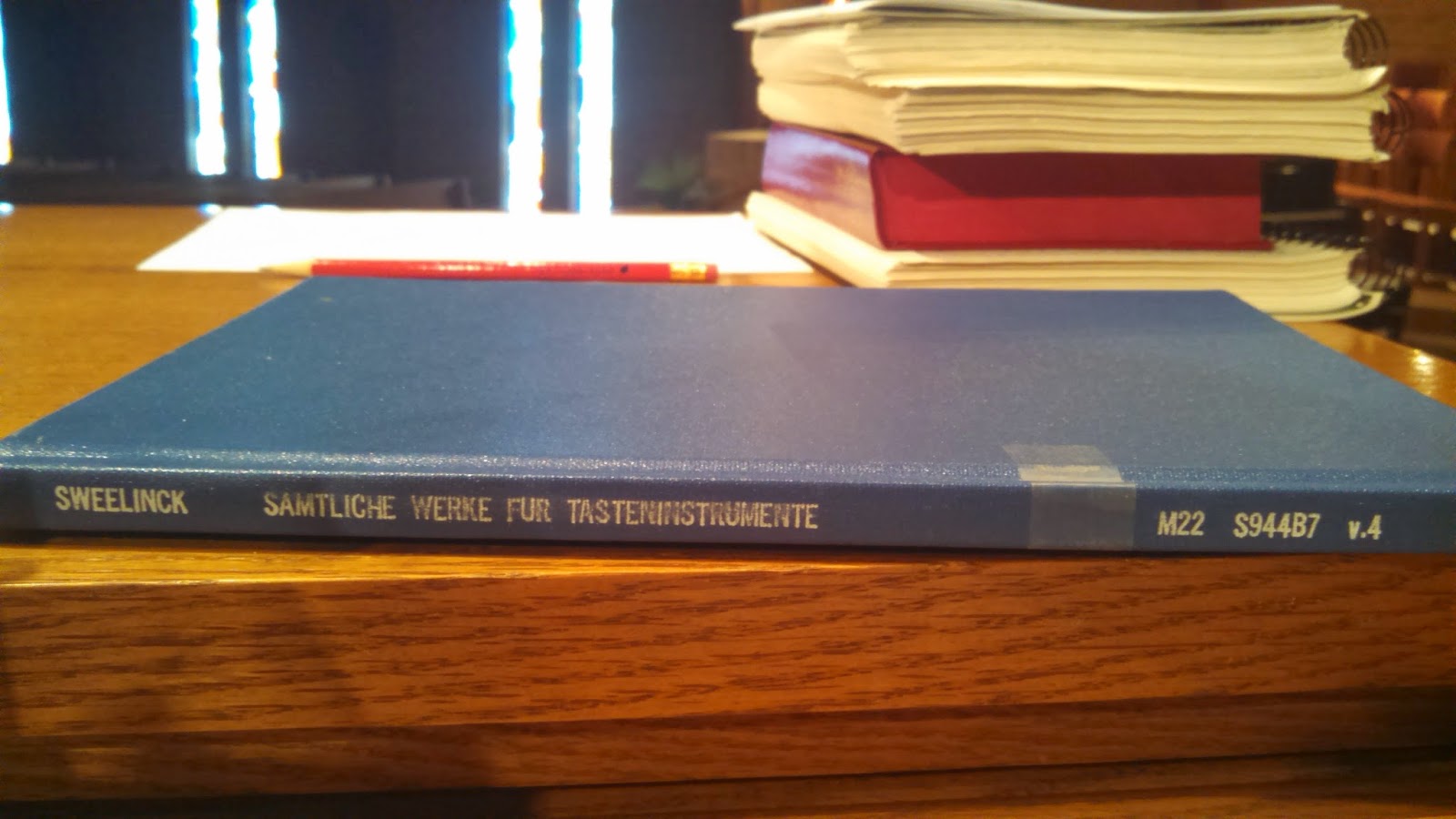 On our church organ currently sits a volume of music by Sweelinck. Notice the title: "Samtliche werke fur Tasteninstrument" which I've incompetently translated as "collected works for tasty instruments!"

Of course it means no such thing. But through the strange quirks of the evolution of language, the terms for touch and taste seem almost reversed. Here the term for keyboard instrument, which is something you touch to make sound, ("tasten") seems to refer to one sense in Dutch, and another in English. If you have nothing better to laugh at, it can be at least mildly amusing.

Personally, I would hate to have to deal with the ramifications of such a conclusion. A nine foot Steinway might provide food for several months, but it would be a horribly expensive way to dine.

When one is looking for connections, this is a reminder that there are many pitfalls. But connections are the very food of thought and so we press on.

Etymology is one of many fields which fascinate me but for which I have little time and will never be an expert. But languages like English aren't alone in containing "words" which have both subtle and obvious connections to other words. Music does as well. In the most obvious cases, composers have deliberately inserted groups of notes that serve as code for something. One popular form of these is the composer's name. Which is how we get tennis into all this. Don't you just love it?

One of those musical names belongs to Dmitri Shostakovich, who used the notes D-Eb-C-B to spell his name in some of his compositions.

Wondering how that works? It helps if you are German (which he wasn't) because that gives you a little more flexibility in the musical spelling department.

So imagine my excitement when I heard Shostakovich's name being used by someone else. That someone else is Erik Satie. It is heard twice, as the first four and next four notes of the last member of his "Sports and Recreations." I give you "Tennis."

Now right away I was thinking "come on, now, that connection's not possible." Shostakovich would have been too young to be known in France, and how the heck would Satie even know Shostakovich, who didn't travel outside Russia, never mind that he liked to play tennis. It's not like they could have played doubles on weekends (not that I wouldn't pay money to see that).

So, a mere week later, late one night, when I had nothing less important to do, I finally spent a whopping 30 seconds with the Wikipedia to debunk my excitable theory. Basically I looked at his dates: Shostakovich was only eight years old when Satie wrote "Sports and Recreations." He become known to the musical world first through his First Symphony, which premiered in 1926, the year after Satie died. Prognosis: a complete accident. Also the Shostakovich estate can't retroactively sue the Satie estate. (If he ripped off Marvin Gaye that would be different.)

It's too bad, now that I have no sensational paper to publish. But apparently there is still such a thing as coincidence; it just doesn't sell that well. So....did Satie know something about the leisure habits of a famous Russian composer yet to become known? And...how on earth did he know that? Or did he?

You decide.
Posted by michael at 8:00 AM