Last Thursday I went to see Cameron Carpenter in concert. In last week's blog I mentioned that Mr. Carpenter is probably the most widely known organist today and that most organists do not like his unorthodox methods. Also I noted that the phrase "do not like" is a severe understatement.

To that list of vehement critics I should add organ builders. I met one of our local builders before the concert and he reminded me that whenever Mr. Carpenter plays an organ in the wild he likes to complain about it publicly during the concert. This, for some reason, does not endear him to the people who design, build and maintain these incredible instruments.

Most of the time, however, he does not play a pipe organ at all. He has custom made his own electronic organ and takes it with him wherever he goes. It consists of multiple sets of sounds sampled from organs all over the world, including a theater organ or two combined with French Romantic and German Baroque organs--a kitchen sink of organ possibilities. It is a massive setup, consisting of about 12 or 14 very large (12ft?) speakers and several smaller ones (not much taller than myself) and a five manual console with hundreds of stop knobs. This allows him to play the same organ every night, which is one reason he does it. Another is that he feels that the organ's lack of portability is one reason for its unpopularity. He says he wants to be able to take the organ to places it can't already go.

That may be give him a purpose, and to judge by the photo of him in lofty profile in the banner above the stage next to the claim "The World's First International Touring Organ" he takes it seriously, but it was probably the novelty of the instrument that brought out the crowd. Curiosity tends to do that. He also likes to offend people (see his remark that he has always found that idea of the organ as a religious instrument "comical") which will also bring people out in droves to see what all the fuss is about.

What did they see when they got there? Well, what I saw was a fellow who can really play the organ. Technically he can't be accused of faking anything. Unlike showmen pianists like Liberace or Yanni who made careers out of pretending to be technical giants when they weren't, this fellow can really get around the instrument. He is able to take on the most challenging literature as well. You can't accuse him of not having the chops. You could accuse him of having poor taste.

Carpenter addressed that during the concert. To his critics who think he is all style and no substance, he responds that "style IS substance." I don't agree. The two are not mutually exclusive, however. I think style and substance are interconnected, and overlap, but they are not identical.  His is a rather Liberace-like answer.

It is not an unexpected answer, either, for one who has flair in abundance. And perhaps in order to impress organists in the audience, he went farther in the direction of substance than I had been led to believe he would. On the first half of the concert he played actual organ literature, twice. One was a hefty piece by Marcel Dupre that organists like to play to show what they're made of. The other was a piece by Bach, his prelude and fugue in A minor (Bwv 543). These must be from his student days at Julliard.

As if to prove the oppositional equation between pleasing a mass audience vs. playing nutritive music, my companions said after the concert that they had enjoyed the second half--which began with one of Bach's flashiest pieces and then spent the rest of the time in a medley of Gershwin tunes and other popular hits--much more than the first half, which had included the more substantive music (and thus been more challenging to the audience).

Those forays into the real literature did convince me that he has taken up residence right in the crack between substance and style, trying not to turn his back completely on the heritage of great music while also trying to wow an audience by doing something ostensibly new. His interpretation of Bach, though, would not please any Bach lovers.

For one thing, it was too fast. So fast that the pedal passages during the prelude were inaudible mud. For another, he enjoyed "orchestrating" the piece by introducing theater organ sounds seemingly at random in the midst of passages which, historically, would have remained in a monochrome. Not only is it unorthodox to change sounds like that, it is pretty near universally assumed that Bach would not care to have xylophones and celestas intrude themselves into his fugue. Perhaps this is Mr. Carpenter thinking he is doing something new. Or he is merely suffering from Restless Mind Syndrome.

My historian wife asked whether he really is doing anything that new. And it may well be asked just how innovative he really is. Taking someone else's music and adding a few unusual sounds to it may get notoriety as a controversial interpretation, but it is creativity with a small c. He does also compose, apparently--the first piece on the program seems to have been his arrangement: it was in the watered-down Chopinesque idiom you hear a lot these days--but I didn't get the sense he has his own voice. At least yet. But let's start with the instrument.

As fascinating as it must have been to the assembled multitudes, this "first of its kind" is really the type of instrument that you and I could have in our own living rooms if we had the money and the desire. This is because it consists of sounds recorded from organs all over the world and digitally available through electronic keyboards hooked together. The husband of my predecessor at Faith UMC started the company that does this, and many persons have purchased the sounds of many of the world's fine organs and can sound as if they are playing them right in their own homes. Many of them have posted videos on Youtube. Notice if the videos used "Hauptwerk" sample sounds (that's the German term for the main keyboard, by the way). Rob Steffanussen's Youtube Channel comes to mind--he has a very nice setup he designed himself.

What is different about Mr. Carpenter's instrument, mainly, is that there is a lot more of it. He has taken I don't know how many sampled sets from all over the place, including different types of organs that wouldn't normally be compatible--I'm not even sure whether it would be physically possible to have theater organ stops and church organ stops together in a real instrument, since the wind pressure is so much greater for the former--and put them all together with some purely synthesized sounds. What this gives him is a lot of sounds to work with, a lot of buttons to push, and since he is always in motion and able to negotiate this organ with swift, economical movements, he commands a gargantuan lot of effects in a single program. It is very entertaining to watch, and since we know people will want to watch, the instrument is center stage where you can see everything he does with his hands and feet; in addition he is projected on the "jumbotron" above, larger than life. Contrast this with a regular organ concert where the instrument is up in the balcony somewhere or positioned so the organist is invisible to the congregation (usually on purpose). 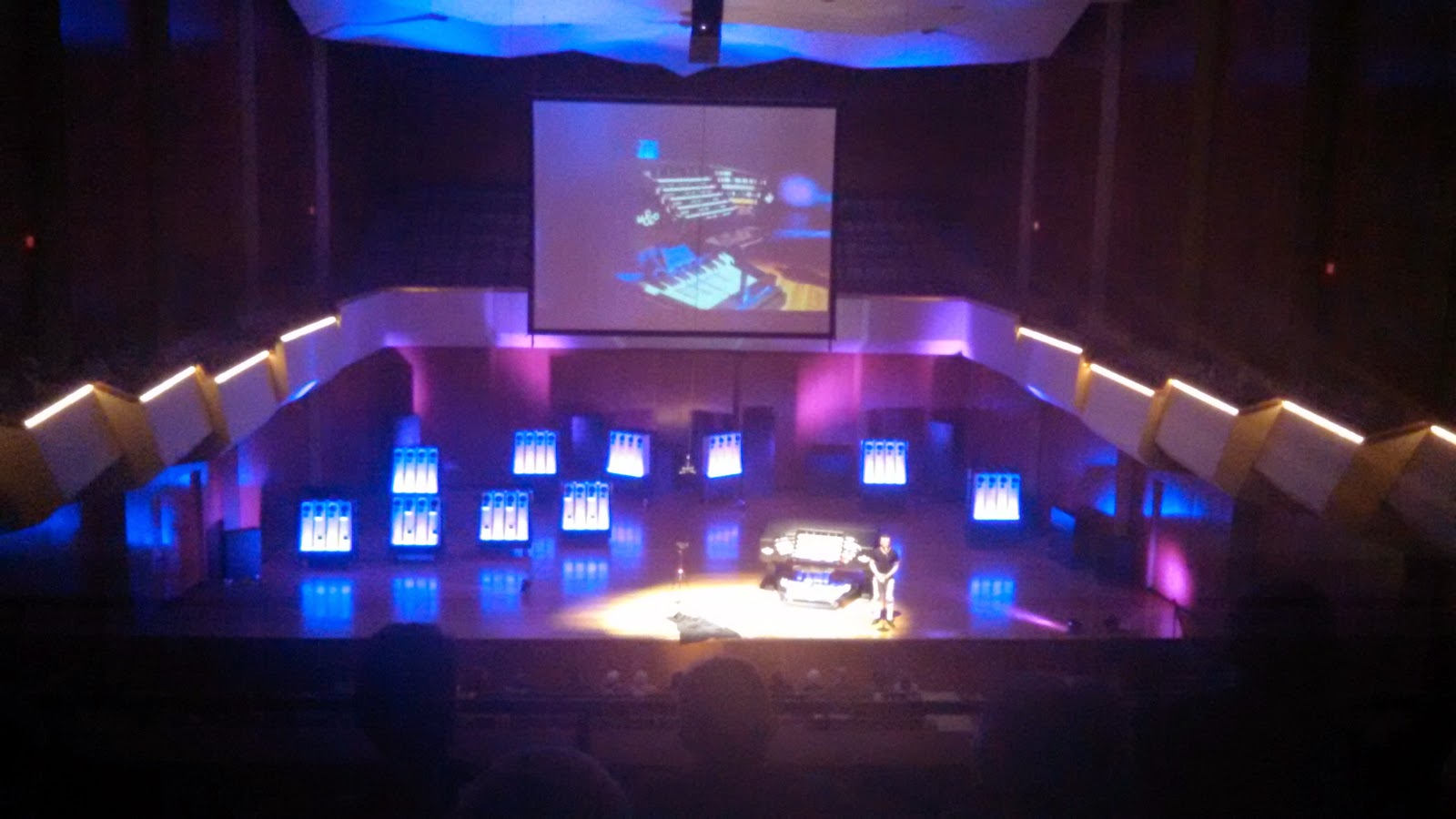 What does he play on it? Some organ works, largely transcriptions (which is the only thing mentioned in the paper but when is the newspaper ever right about everything?) and plenty of re-arranged tunes with plenty of effects thrown in. And just as his electronic organ does not have an original voice, but consists of a number of other instruments put together, the musician himself seems to favor music he can re-process, re-imagine, re-invent. How interesting this all is depends on the listener. My wife thought it would have had more of a punch if one knew the original sources. Others simply revel in the sounds and assume what he is doing is new because he says so. After all, he is using the latest technology, and in a profession as bound to the past as that of organist, it is not so hard to appear unique.

In the long run this will probably not earn him a niche in musical history. There is a long tradition, actually, of virtuoso instrumentalists showing off the latest musical innovations and stunning crowds but not leaving a permanent mark. If his art remains strictly derivative this will happen to him also. And the technology he uses--will he have a major influence on the evolution of the instrument? perhaps, though it is just as likely that he is riding the wave as making it. I do admire him for his bravery and for his virtuosity and for standing out in a profession of conformists. After the concert our friend wondered what had become of the other 150 people who went to Julliard with and admired his ability to fashion a career for himself and on what seemed to be his own terms.

Meanwhile, he continues to draw a crowd. Outside of Europe I've never seen more than 50 people (maybe 30) at an organ concert, the single exception being the concert I gave last fall that filled the sanctuary with maybe 250 people. That was because we advertised this concert as something different and new, I know a lot of people in town, and the heaviest piece of organ literature on the program was Lefebre-Wely's Sortie in Eb. I did not invite the other organists in town. I didn't figure they'd like it. You might say this was my own Cameron Carpenter experiment. Folks loved it; I had to improvise an encore.

I enjoyed myself too. I wouldn't mind having those folks back to play a little Bach for them, but it probably wouldn't be so acclaimed. Nevertheless, I do it anyway (especially in church). Cameron Carpenter does it as well--who knows exactly why?

Like his instrument, he is a hybrid. And very interesting. Very active, very densely layered, restless in the extreme, perhaps not very original, yet striking out on what, at least in some contexts, is a very original path. I was afraid I'd have to hold my nose when our friend got us tickets last fall. But I'm glad I went.