piano vs. organ, round two


First, the obvious. We know that an organ can easily out-shout a piano, so if sheer volume is your thing the organ is the clear winner--at least if your particular model has any size on it. The one at Faith church can hold its own with a 40 piece brass band and even a dozen bagpipes (frankly, I could have blown either of them away if I'd pulled out all the stops, although I'll admit the bagpipes did give me some pause!)

The organ can, under other circumstances, whisper as well, though the organ at Faith finds this a challenge, one which is exacerbated by the fact that the softest string stop is not complete--if you want access to the lowest octave you have to use the louder of the two string stops on the Great manual--not a thunderstorm, exactly, but less of a zephyr than otherwise.

However, the piano purrs in a way that the organ does not, and, having been raised as a pianist, I still admit to preferring the basic tone of the piano. I will state frankly that I think most congregants do as well, for better and worse. There is a lot one can do with it; it dies as it speaks, it varies ever so slightly with each note, it is intimate and friendly (and familiar--there used to be one in every home). By contrast many people find the basic organ sound disagreeable. A pity, especially with so many fascinating sounds to choose from--an organist is basically commanding the sound of an orchestra. But it is an orchestra that is missing a piano.

The piano is also the better instrument if you have an inferiority complex. These days I am mainly "reduced" to practicing on a 7 foot Steinway, which is two feet shorter than the instruments concert artists prefer and most concert halls have. There is a difference between those Steinway D's that festoon the concert hall and the model B of pianonoise fame, but it is not nearly so great as the difference between the organ at Faith church and the organ at St. Paul's cathedral. A piano's size does matter, but there is only a two foot difference between our B and the largest pianos in the world (o.k., at least one firm makes a 10 foot piano but it doesn't seem to be considered an improvement), whereas some of the grand organs in European cathedrals are many, many times larger than our organ, and feature pipes that you can actually walk through they are so large.

Large, and complicated. As I've mentioned before, the organ is a great instrument for problem solving. It has a large number of switches, knobs and buttons which allow not only for all manner of different ranks of pipes to be activate, producing different sounds, but it allows the player to manipulate and mix those sounds together by either transferring those sounds from one keyboard to another or to add sounds an octave above or below without actually having to play those notes. If the organ has an electric action, you can pre-program combinations of stops and activate them with the touch of a finger or the swift (friendly) kick of the toe. This gives the organist lots of power, not only in volume but in variety; however, it also frightens people with its complexity. My pastor sent me this comic the other day that illustrates the problem: 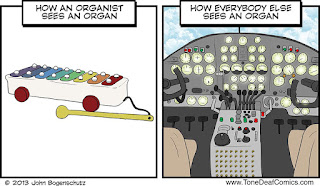 (that's from ToneDeafComics.com which you should check out if you found that funny)

This may be why organists don't seem to have as many friends. It is a very specialized instrument. Organ enthusiasts share their love for the organ with other organ enthusiasts. At least with a piano there is a chance you will find someone from outside the ranks willing to listen. A partial shame there, too. Whenever I am in a room with lovers of the piano I feel like an organ apologist, but when confronted with the bigotry of organists I assume the same defensive posture with regard to the piano. Why not have both?

A piano, of course, cannot hold it own in a large cathedral, but most of our churches are not such monuments of stone, and have pianos as well. Ours has both and I wander easily from one to the other. Acoustically it is a little wet for the piano, and a touch dry for the organ, but it is not a bad compromise (Methodists tend to be in the middle of the road in a lot of other ways, also.)

That allows for a lot of variety both for me and our congregants, and allows me to draw from a very rich heritage. The organ goes back to before written music, and has about 7 centuries from which to select it. Most of its contemporary repertoire seems to be limited to Europe and America, though--the organ may be catching on in other parts of the world, but it is too expensive to be enjoyed everywhere. The piano only goes back to 1700; playing Bach on one is still a controversial decision, but it has a vibrant present and future in terms of the size and scope of the literature. Still the quality and quantity of works produced for either instrument is enormous. Another draw.

It is nice to be able to fight over something that does not draw blood or result in massive property damage, and so you won't hear partisans squabbling over the superiority of their favorite musical instrument on the evening news ("hey! hey! equal time for the banjo!" somebody yells from the back). The woods are full of secretly overwhelmed pianists sniffing that the organ isn't a worthwhile pursuit anyway, and organists looking down their spectacles at an instrument that doesn't even take up an entire room, and with a pedigree than doesn't go back to the English Civil War (can you believe it?!). Meanwhile, I am on both sides of the line, which is a great way to get shot by both sides.

But I get to have a lot more fun than either of you. So there.