After years of playing the organ at Faith UMC in Champaign, Illinois, I discovered an incredible secret. Dan Brown has yet to write a book about this but, (hold your breath) inside a crevice in the console of our organ was an amazing find. It was a map...to the organ! (It may have been left by a secret French brotherhood in the 5th century--or our organ builder; I'm not sure). 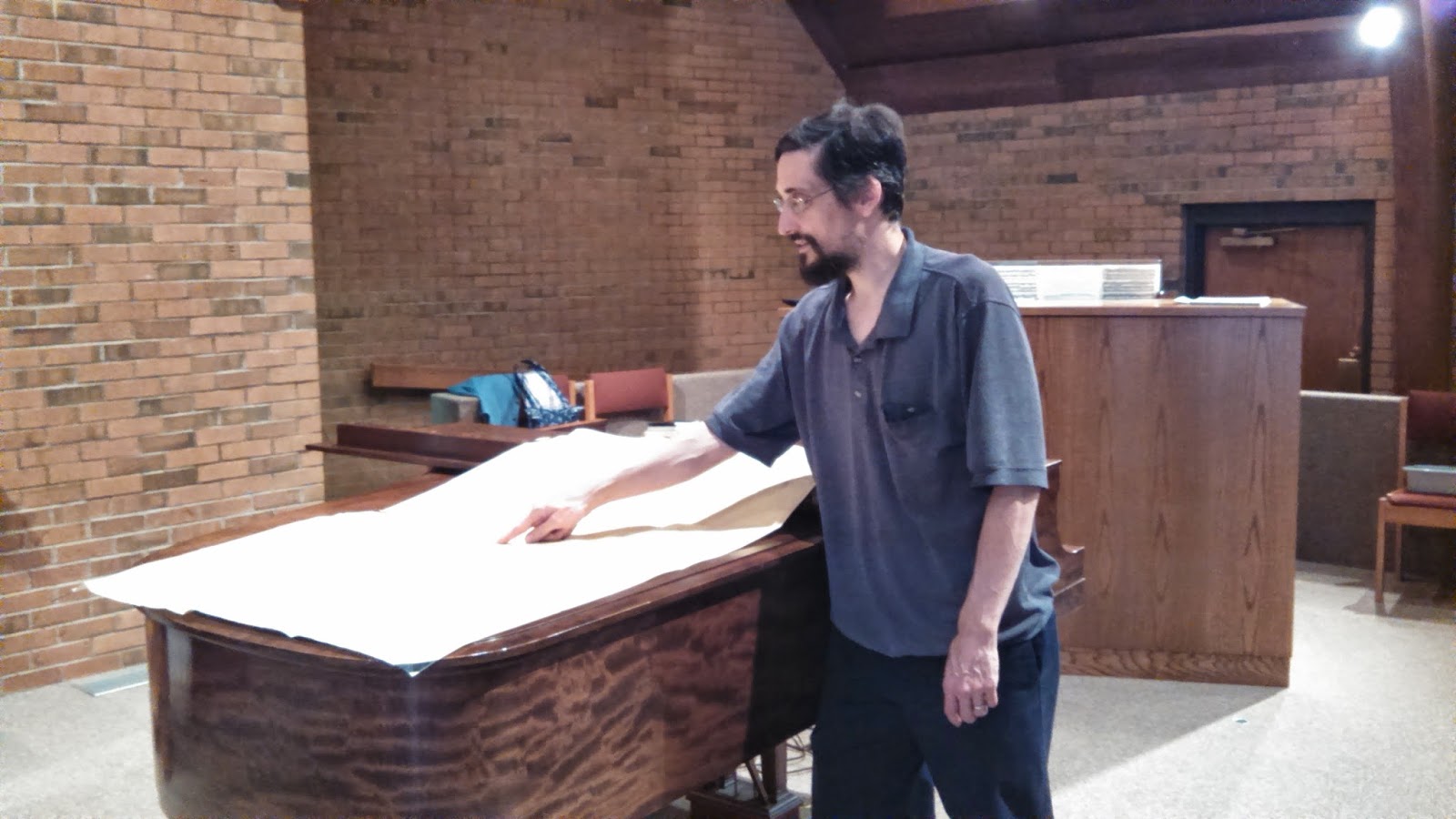 Most musical instruments do not take up several rooms, and thus, it is not so important to have a map. Our organ tuner doesn't seem to need one because he knows the make-up of the organ quite well and can guess expertly at what he can't remember, if there is anything in that category. He knows our organ well. I'm learning it also.

What you see on Sunday morning as you look above the altar are only a few of the pipes which belong to the organ. It's probably about a quarter of the instrument. These pipes are "on display" which is where the french got the term "montre," but the Germans call them "principles" and the English "foundations." They make up the basic, foundational sound of the organ. Loud enough to carry a congregation, but rather plain and flutelike in tone, the foundation stops were not intended to whisper, so their pipes are out in front and cannot be made softer (or louder) through any means except choosing not to play them!

But behind those pipes, some of which belong to the upper keyboard, some to the lower, and some to the pedal (particularly those really tall pipes on the right, the tallest of which is 16 feet), there are three rooms filled with pipes that you've never gotten to see...until now. They are all behind shutters, which can be opened and closed by depressing the "gas" pedal on the console. Full throttle means they are wide open and allow the sound of the pipes behind them to escape into the sanctuary. When the shutters are closed, the pipes are doing their same fine job of making sound, but it is now being muffled by the wooden shutters. We organists call these "under expression" meaning we have dynamic control over those groups of pipes.

Just what is back there? I estimate there are over a thousand pipes on our organ. I'll have to ask our technicians for a closer guess. We've got around 20 stops, which means there are over twenty sets of pipes, each set of which would have to have about 60 pipes, one for each note on the keyboard, though a couple of stops don't go down the whole way. And there are a few with more than one pipe per note (I'll explain in a few weeks). 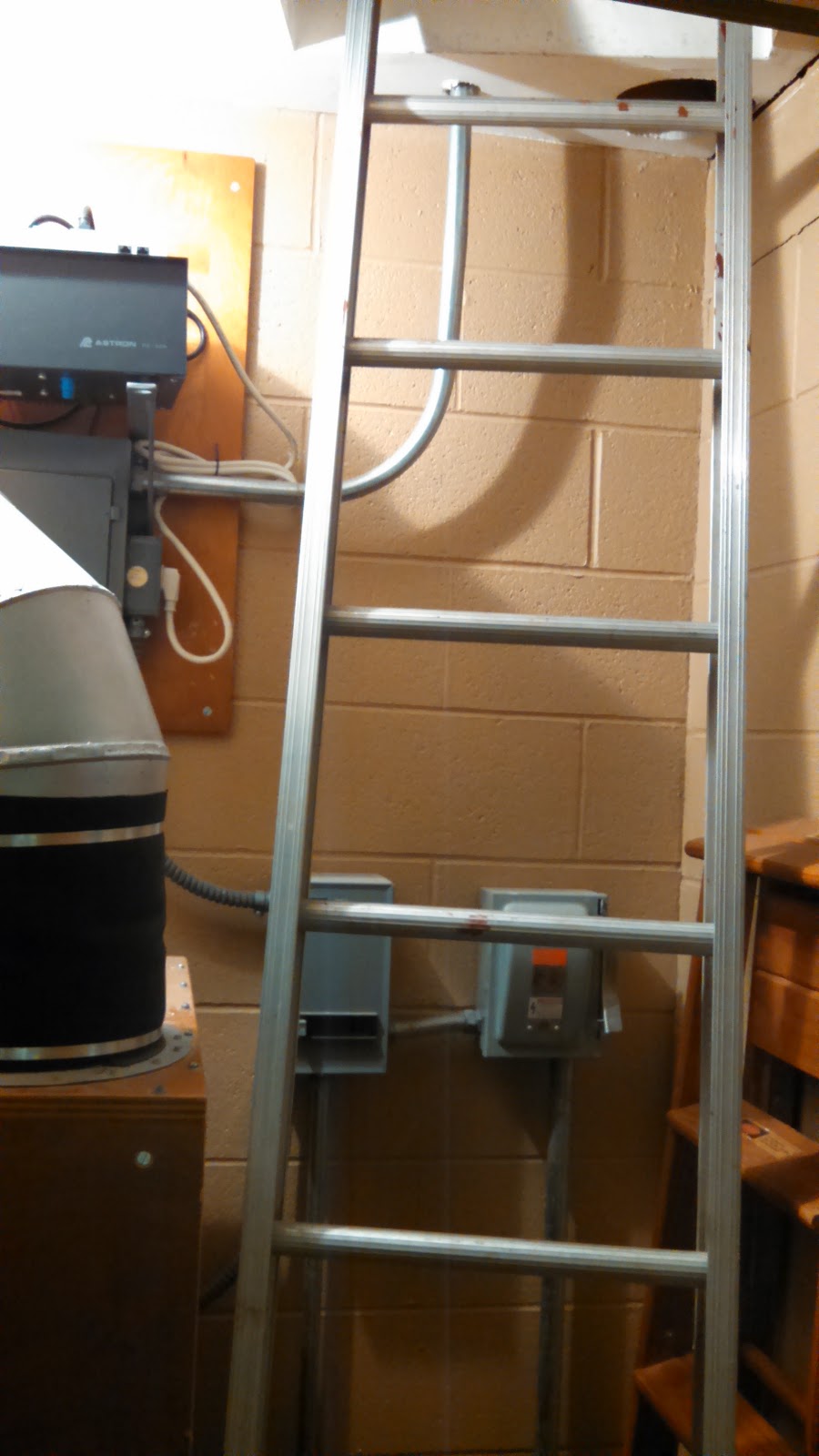 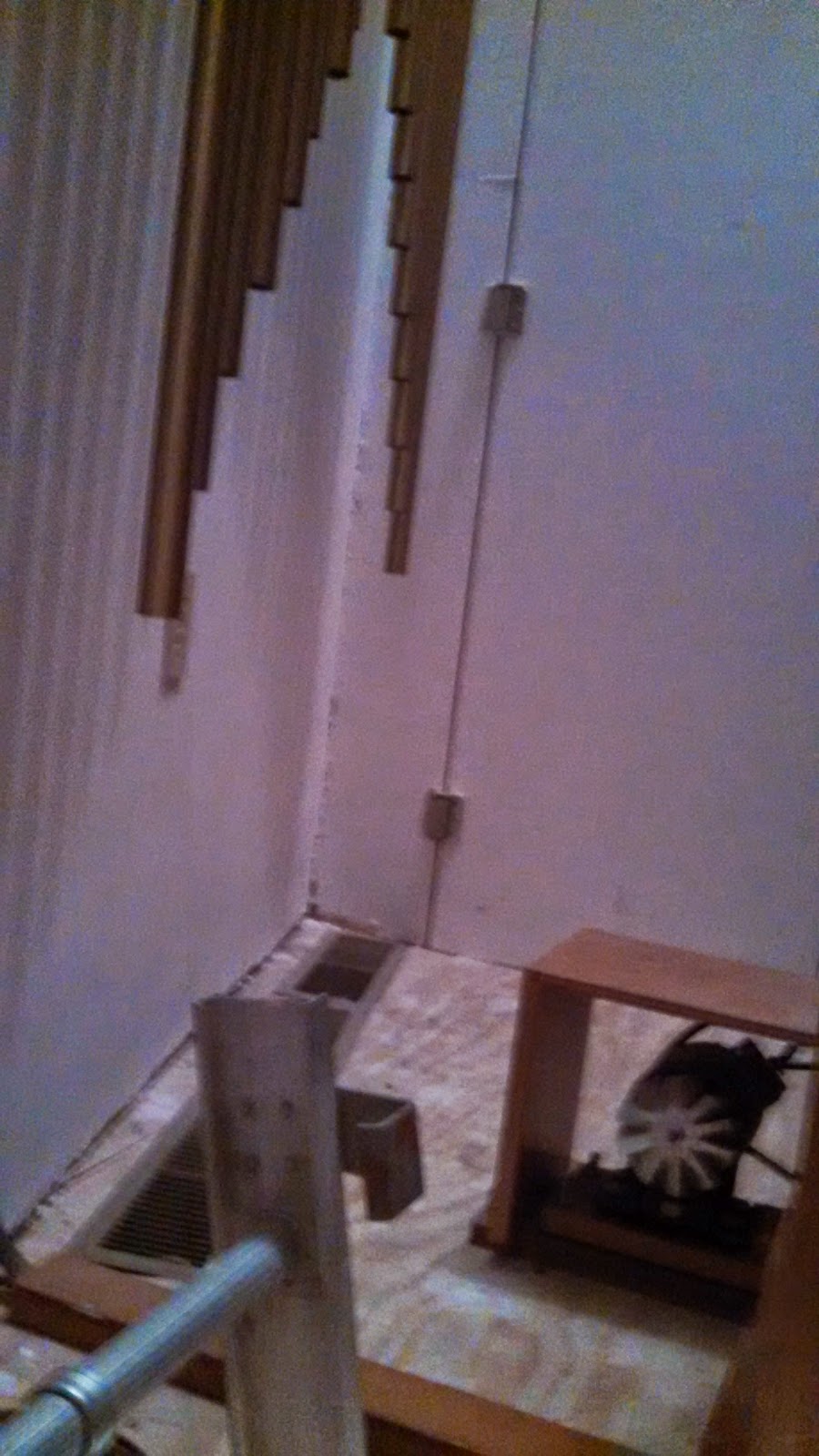 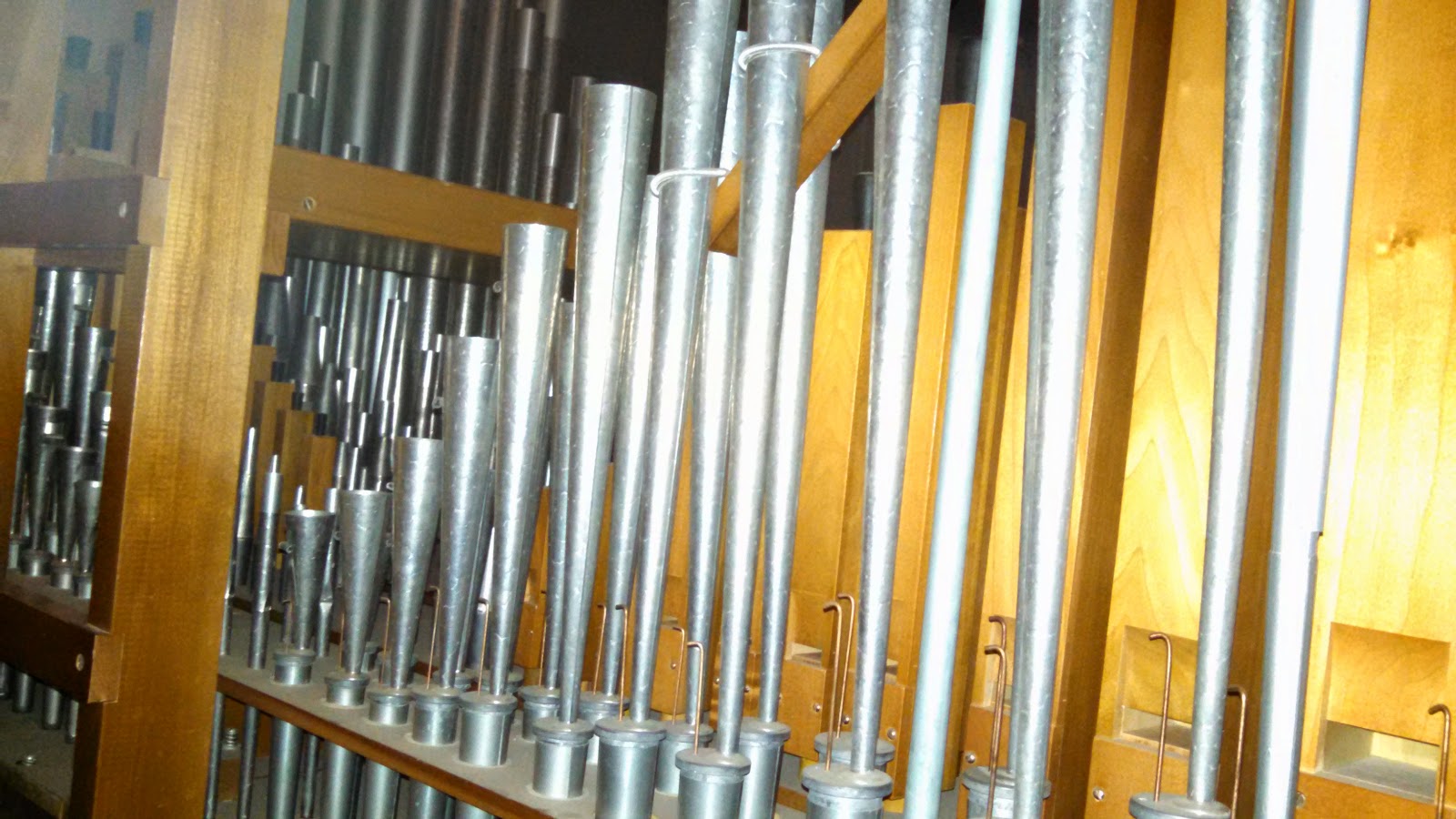 In order to get to these, you have to ascend a ladder. At the top, if you aren't careful, you'll bump into the chimes. Once in the pipe room you are greeted by this: 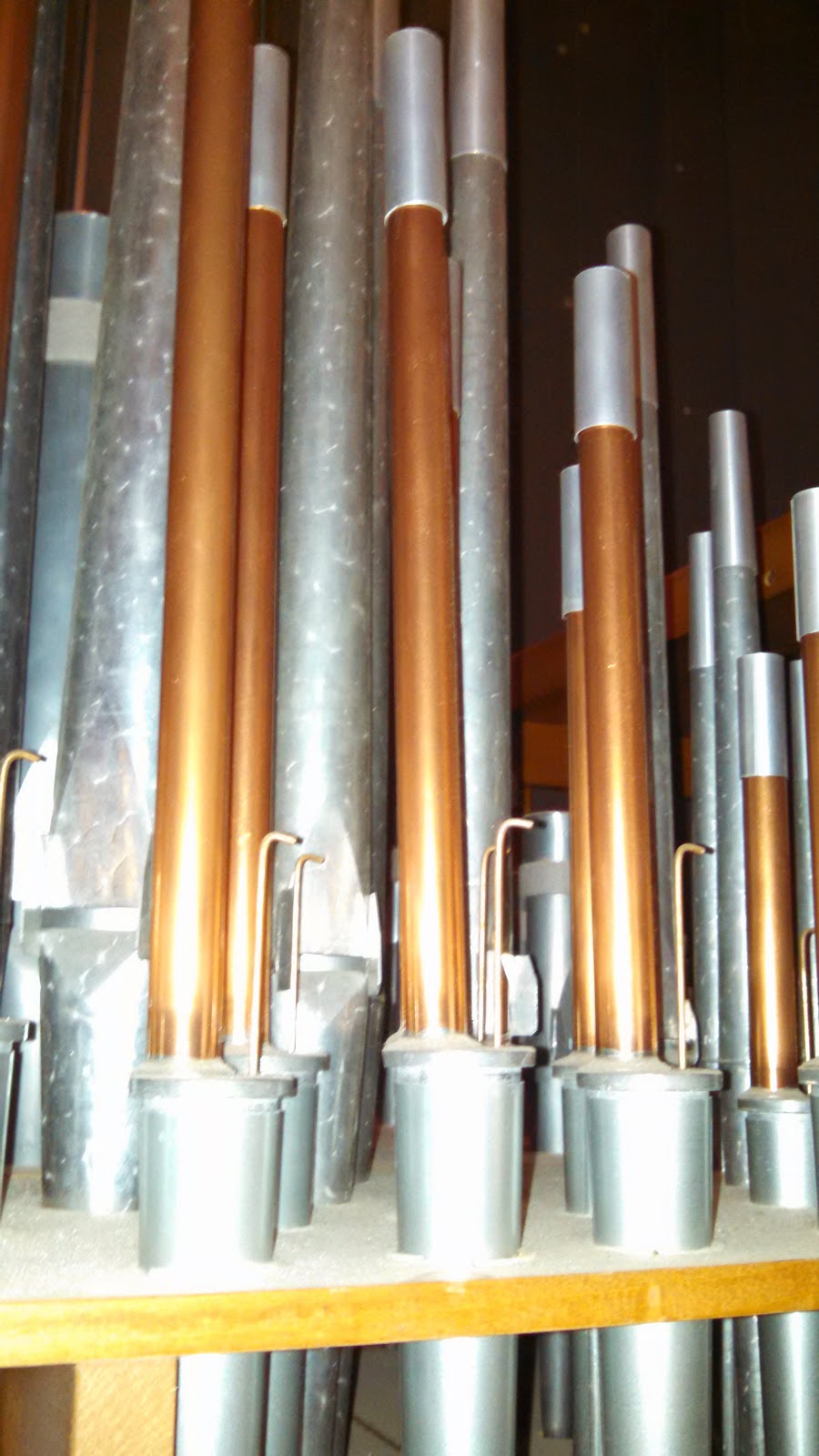 An assortment of pipes, large and small, in groups, each of which is responsible for a particular sound on the organ. The are pipes are made of metal or wood. Some are capped at the top, most are open. The wooden pipes are square, the metal ones round. They range in size from 16 feet tall to only an inch or so. A few look like rockets and look like they have dipsticks.

There isn't much room to walk around so you have to be careful not to trip or fall; that could be one expensive trip!

It is on overwhelming experience to see a pipe room for the first time, but that is what our map is for. The organ's designer has found a place for everything, and that design is logical and fascinating. In future installments, we'll find out what some of these specific groups of pipes are for and how they combine to make the organ such an awesome instrument. 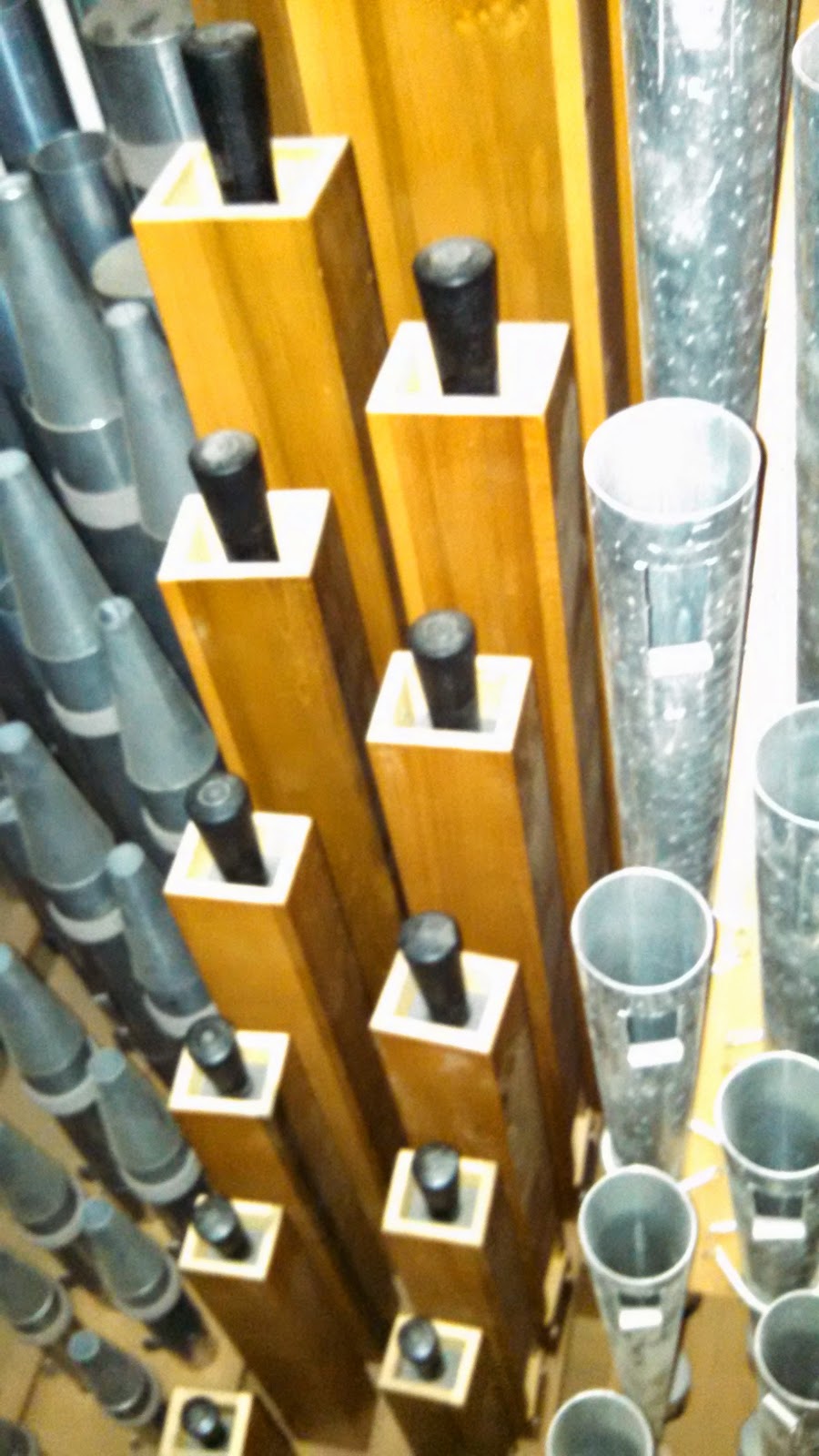 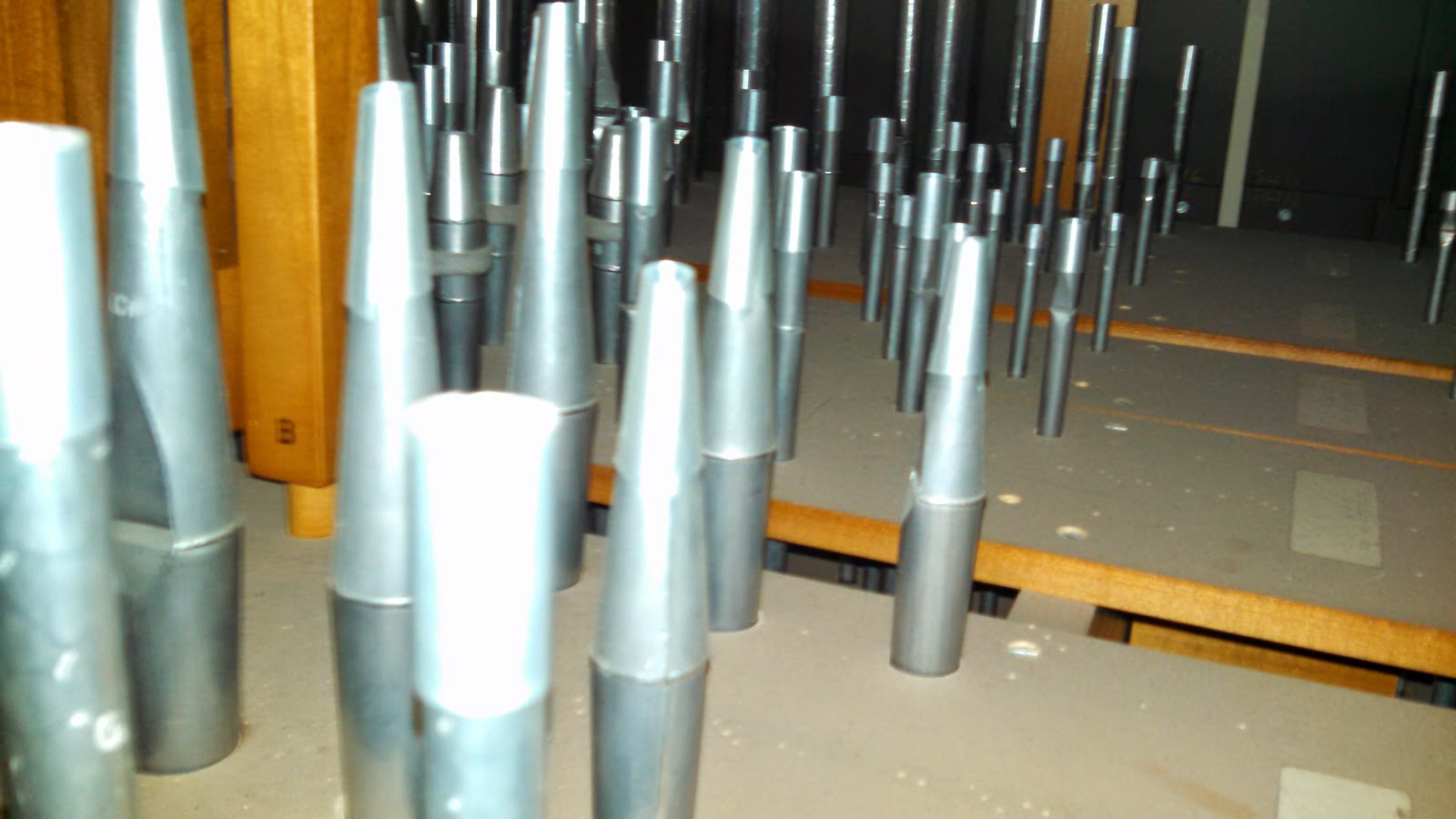 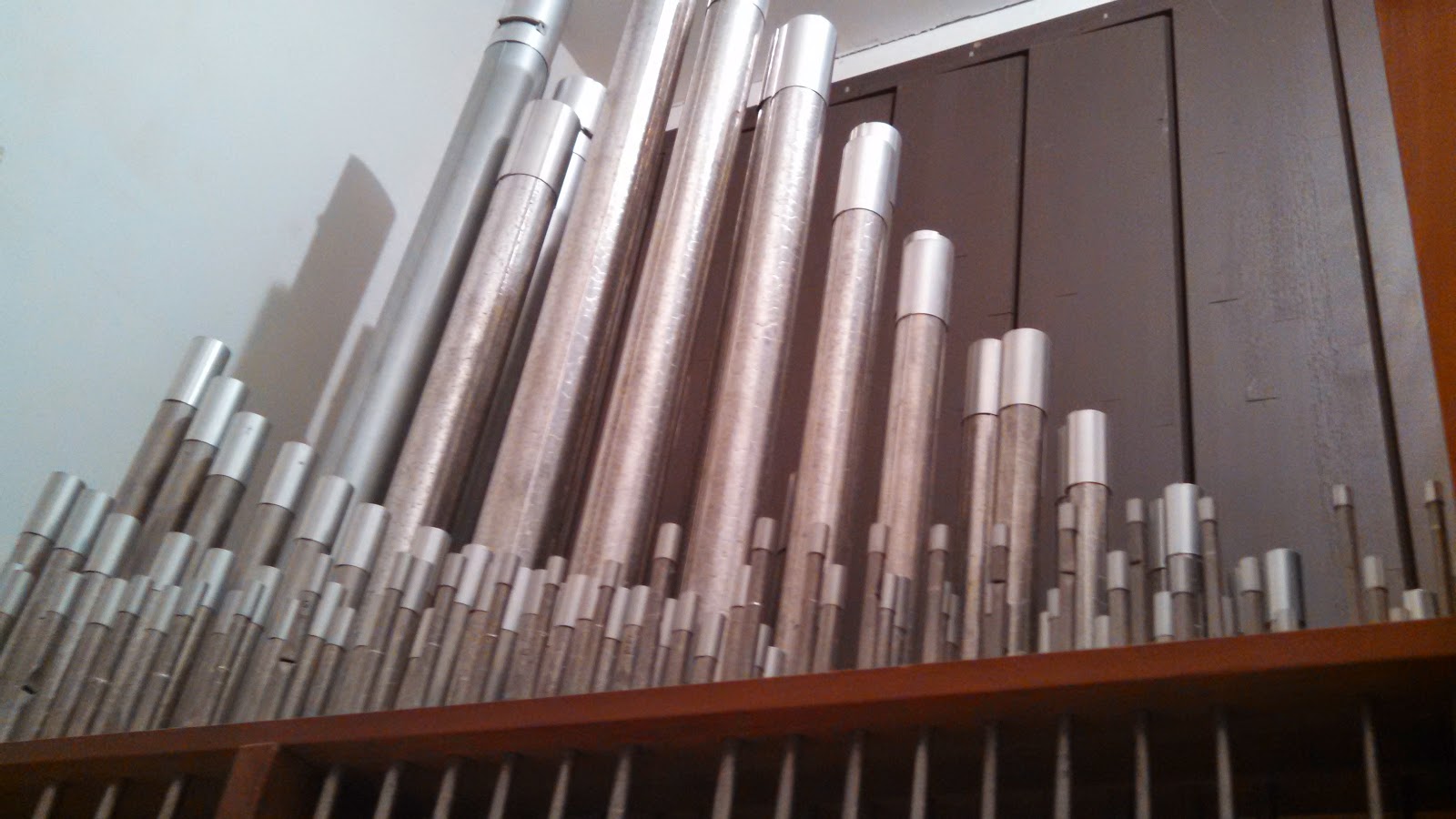