It looks like I won't have to write a sequel to "Silent Night" this year after all. That would have been a pretty tall order, considering how popular that carol is and how the sequel would be bound to disappoint.

You're familiar with the story of its nativity, right? I don't know how historically accurate it is, but the legend begins with the breakdown of the church organ, right on Christmas Eve. Suddenly the priest and the organist are out of a way to lead the music for a very important service, and they sit down and bang out "Silent Night," to be played on the guitar. It's a hit. The priest writes the words, the organist writes the music, and a Christmas Miracle happens.

About a decade ago at another church of mine the organ decided to manifest a small problem the day before Christmas Eve. I had also planned quite a bit of organ music for this special service. The trouble was that one of the notes wouldn't stop speaking when you drew any of several stops. It's known as a "blown primary" and it's not particularly good news. However, we got somebody to service it on Christmas Eve in the afternoon, and a few hours later we had our service!

This year's trouble also had something to do with the primary, but it was about a note that would not turn on. A "G" above middle C on the upper manual wouldn't sound on most of the stops. It was kind of inconvenient. I use that note a lot and it is hard to work around it when it affects most of the stops instead of just one or two.

At first it was inconsistently troublesome, and I put off calling our organ technicians because they are going to tune it this week anyhow (regular semi-annual tuning) but at last one afternoon the usual trick for getting the note to turn back on again, wherein you pull out stops that WILL play the note and tease the note back to life somehow, didn't work anymore. I gave up and called our guy and he said he'd come the next morning.

Of course, the note worked that morning. You were expecting that, right? And I managed to make the recording you are about to hear. It uses the note many, many times, including for that little repetition on the words "news! news!" about ten seconds in, which, although the piece is 12 years old now, makes that part seem like an inside joke. I'll play the piece for you, but first, here is what one of the passages sounds like with that note missing (it obliged me the day before):

You've probably figured out that the piece is based on the melody "Good Christian Men, Rejoice." Also that the organ sounds like it is being constantly censored when probably the most important single note in the piece goes missing. By the way, I have no idea whose digital watch that is the background. People leave them around our church and they go off at various times of day.

Now of course the technician tried several things when I explained the problem, and thought perhaps he'd fixed it, which was hard to know since it sometimes worked and was currently fine. And then the minute he left--well, you know what happened. The first G I tried to play sounded like this: 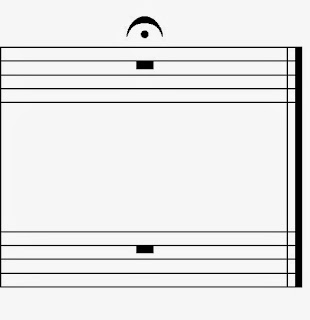 So I called him and got him to turn his car around and come back. He fiddled with it some more, and now we are hopeful that it won't cut out on me in the middle of the service on Sunday. If it does, he says he plays at the church down the road and will come look at it again between services. That's dedication.

It's too early to rest easy, I suppose. We have all of Advent stretched out ahead of us to worry about. But it looks as though things are going to be fine with the organ, and if somehow they aren't, we'll just make it happen somehow. Besides, I know a guitar player....

Listen to "Invitation" by Marteau
Posted by michael at 7:00 PM