This has nothing whatsoever with organ playing, being a church organist, being a musician, anything having to do with the piano or any other vaguely musical device. Well, there is a first time for everything.

I'm not the sort of person who looks forward to very many holiday traditions. A lot of traditions happen because people are just too busy to do anything new and fall back on what they did last year because it is easier. A good deal of what we do at our church falls into this category. We even sing the same three Christmas carols on Christmas Eve every year. I try to play something different on the organ or the piano every year; change things up a bit. Not to mention that there are tons to the 85th power of music--even good music--for Christmas.

But here's one thing that I do enjoy every year. Not the Christmas carol parodies, or the Night Before Christmas parodies, or all the radio stations playing Sleigh Ride 45 times a day for a month and a half. It's something our Bible study group does the last week of the semester. We go to the local Toys (reverse R) Us and boy toys for kids who might not get any this year because their families are on hard times.

It's kind of fun. We mill around the star, a half dozen youngish adults, having fun playing with the toys, making sarcastic comments about some of the latest and greatest, glad to see the classics are still around, trying to choose the right toy for purchase this year. It's funny how you end up trying to get the perfect toy for someone you will never meet.

One year it was a soccer ball. I think I got a stuffed bear another year. I took a pass on the remote control shark that floats through the air and scare people who come around the corner. That was way out of my budget. But it was so cool!

This year I went with a dinosaur. Not just any dinosaur, mind you. This one was over two feet tall! With a very pink tongue! And scary all the same, even if he had just swallowed a vat of Pepto Bismol.

I vowed I would get a smart gift, like a puzzle or a chess set, the next time. For an older, perhaps brainy, child. But in the meantime I got to sneak up on people and roar at them. Yeah, I know. Very dignified. Funny, I don't actually remember being that enchanted with dinosaurs when I was four. Maybe I'm making up for it.

There were seven of us on this little adventure and we got quite a diversity of toys, as you can see below. I, as the photographer, am not pictured. But I let my dinosaur stand in for me. He's third from the right. I know he doesn't look very scary in the picture, but just you be traveling down some dark alley late at night and find him out looking for a midnight snack! 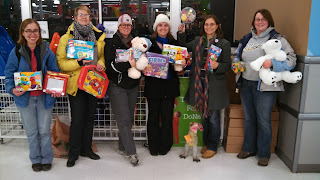 Of course, we had to part with our gifts as soon as we paid for them. They go in a large bin at the front of the store. My dinosaur hadn't even gotten a name yet. I guess I'll leave that to the recipient. Then I got a sad lesson about dignity. It doesn't last long. There was my mighty, scary dinosaur, robbed of his, the mighty T-Rex, king of exactly nothing, stuffed into a plastic bag, laying on his side, only the feet sticking out! 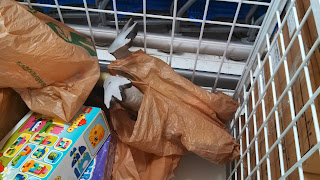 Sooner or later it happens to all of us. I hope my dinosaur had a sense of humor about it.

Then we went next store to the Barnes and Noble, looked around a bit, ordered drinks at the in-store Starbucks, where I had my annual Peppermint Mocha, the only thing I order at Starbucks all year, usually. And we hung around, in conversation until closing time, when they basically kicked us out! That's also part of the tradition.

We've been at this for eight or nine years now. In a couple of years we'll move away. But it's a nice holiday tradition while it lasts.