pictures from the trumpet recital 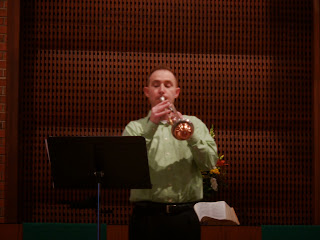 On Sunday, November 17th, Jeremy McBain and I gave a recital of music for the trumpet and organ. That's Jeremy on the left. I'm below talking on the microphone. We were joined for one number by cellist Ka-wai Yu, below. The program included trumpet sonatas by Baldassare and Viviani, and a piece by living composer David Sampson titled "The Mysteries Remain." Also on the program were organ solos by J. C. Kellner, Pietro Yon, and Theodore Dubois. 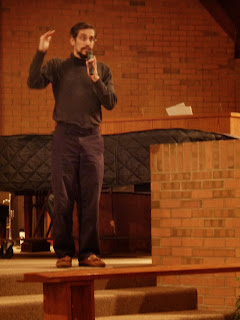 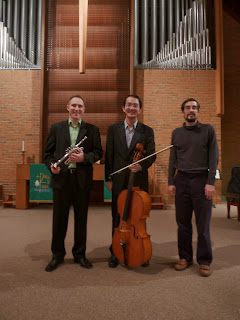 Several tornadoes came through central Illinois that afternoon just two hours before the concert. The warnings ended in time for the concert, and the show went on. I've had a concert postponed because of a typhoon before, but not (yet) a tornado. There were also power outages throughout the region, which had me a little worried about how I was going to be able to play the organ! ("Could I have a volunteer from the audience to come up and pump the bellows, please...") I envy those guys to my left who use only human power to play their instruments.

But the concert went well and we had fun playing it. Thanks to the staff of Faith UMC for giving us the space, to Ka-Wai Yu for playing the cello and turning pages for me, to my wife Kristen for helping with the publicity and Jeremy's wife for printing the program, and to Jeremy for being such a pleasure to work with!
Posted by michael at 11:00 AM