She died on her birthday. Maybe it is a sign of how much goal-orienting striving has taken over my life that part of me thought: good for her! She made it to a full year. Like crossing the finish line. And it was a round number. She was exactly 95. 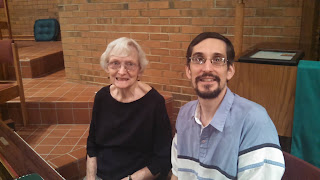 The rest of me was sad and hollow. Marietta had been a friend of mine. I hadn't seen her in several years, since I moved away from Illinois. I wanted to visit her last year when I went out there for a concert, but her overprotective son wouldn't let me come. Apparently that's happened to a lot of people. I knew when I left town that I wouldn't see her again.

Marietta was an all-around nice person. But since the piano was such a big part of her life that is mainly how I knew her. She played piano/organ duets with me often when I was the organist at Faith church in Illinois between 2005 and 2016. There are a few stories I can tell. 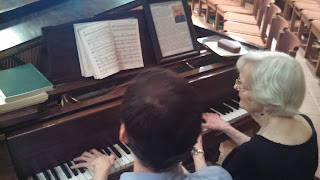 First there is the story of how she and her husband met. It involved a car accident in which he "accidentally" backed his car into hers at a stoplight. He fessed up about it years later after a service. That was an amusing conversation to be part of! (I think that was also the most put out I've ever seen her)

In my mind she is always around 90 because that's when I knew her. But that didn't make her close-minded. After one of my more mind-bending offertories one Sunday morning (an instrumental Sanctus) she told me that it reminded her of the universe! 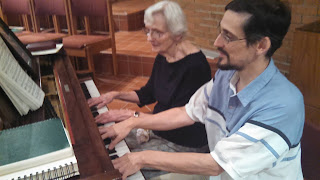 She had been a piano teacher for many years, and could be very demanding! When we practiced she always wanted to make sure we had the right balance between piano and organ. And if somebody goofed we tried it again. But she was too nice to say anything vulgar to the usher who turned the lights out on us during a postlude!

(At the early service there generally weren't many people and the usher, a very consistently grouchy fellow, turned the lights out 45 seconds after the benediction and if you were still in the sanctuary, too bad!)

Whenever the piano needed to be tuned there were three stages it had to pass through since we had a tight budget. 1) the part where I noticed the piano was starting to lose its tune a little. It annoyed me, but I figured, nobody else yet. 2) the part where Marietta came up to me after the service and mentioned that the piano needed to be tuned 3) the day it suddenly 'fell off a cliff' and would be noticeable to the average person. That's when I got the piano tuned.

I got to visit Marietta in her home a few times, and see the butterflies and and the bees that enjoyed her flowers. We always had something to talk about. I miss her.