Greetings from the west coast.

Not that it really makes any difference where I am. Or where you are, for that matter. We're both here now. Sort of.

I've always found it interesting that we are a species that can communicate over vast distances. I may be playing the piano right now for people on the other side of the world. Or they are reading something I wrote several years ago when I was in a very different spot on the planet myself.

We can bridge great distances in time as well. Most of the people whose music I play are dead (some just live thousands of miles away) and many of them have been dead for several centuries. And yet their music is still having an effect on somebody somewhere.

On Tuesday night we attended a concert at Disney Hall in Los Angeles. It was a chamber music concert consisting of the music of Ives and Dvorak. They started with Ives. I've always felt like maybe I had something of an inside track with the gentleman from Danbury. I also grew up in a small town that was becoming much larger as I reached adulthood. My family attended a white wooden Presbyterian church with a steeple and we sang many of the same hymns the Ives knew and used in his works. When I was in graduate school and an academic pointed out in a dry, informative way that Ives quoted this particular hymn tune in the 5th measure and extended that one as the bridge to the second theme I already knew it because I recognized the tune and had maybe even sung it or played the organ for it the previous Sunday. My cultural upbringing and Ives's milieu had some things in common, even if I was born a hundred years later.

This seems important for another reason. Ives wrote in words, too (Memos and Essays Before a Sonata being two important sources) and often spoke of trying to capture his boyhood experiences in sounds. For him music wasn't about the expositions and the modulations to the submediant--in fact, he liked to make academic procedures and analyses a target. Instead, he used musical quotations in a very different way: to conjure up not only the musical memories of his time and place, but to record the way those musical sources made him feel. That's why snippets of tunes drift in and out, veer off in unexpected directions, flow contrapuntally, or get extended in surprising ways. Ives employs a host of useful compositional procedures to make symphonies out of tunes that just want to be tunes, but the effect explores the psychology of the composer in a way that is not so obvious with other composers. It may be the closest thing we have to Freudian composition.

I wondered how much of that would translate to the stage of Disney Hall. Already, in her opening remarks, the violist for the Dvorak piece that was to come later had introduced the Ives and informed us that the quartet wanted us to know that the place where Ives is in two meters at once is supposed to sound a little sloppy so we shouldn't think it was their fault. This is virtuosity anxious that it is being undermined by something that isn't. I don't think Ives would have been happy.

The performance was quite correct, of course. And more, I think. It was lively, and not at all sterile. But I wonder how much the performers knew about Ives and his world and whether they wanted to enter into it. It must have been very different from what they knew: A world of constant practice and perfection meeting a world of experimentation and scoffing at boundaries. They made a fine performance out of it, but was the result really Ives or some other fine composer borrowing his notes?

The audience was enthusiastic. They may have been a bit too enthusiastic. I don't want to be a snob here, but it would have helped if they waited until the movements were over to being clapping loudly. I am not much of a purist regarding not clapping between movements; in fact, some of the time I think it is perfectly appropriate, and other times not so much. But after the slow movement, which is really an unusual time for a major display of enthusiasm, parts of the audience which had been set on hair-trigger applause all night burst into raptures before the group could resolve the final chord. It would be as if I told you that

You can tell that sentence isn't finished, right? It needs more words to finish the thought. Music works the same way, only people don't speak music, and some of them can't tell when a musical sentence is over. I wish they could. One of the most wonderful moments in the entire concert got interrupted by the sound of many limbs smashing together because several people couldn't wait for everyone else to know how much they were enjoying themselves. I hope it was at least genuine enthusiasm, but it may have been because they wanted everyone to know how cultured they were, in which case it backfired.

In any case, it was an enjoyable concert. I don't mean to interrupt your cheery Friday, but if we aren't brave enough to consider where we may be falling short we will never grow. An immature spirit will naturally assume that playing the notes on the page means communicating the intention of the composer. A more courageous sort is strong enough to ask whether that is really the case.

I should mention in passing that the Disney Hall organ, which some have compared to a pile of french fries or pick-up stix, is actually far more chaotic looking in real life than in 2-dimensional pictures. I rather wished I had brought my organ shoes and persuaded the management to let me play Ives's Variations on America at the intermission. 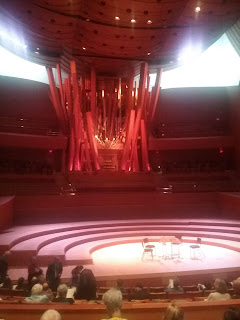 This week www.pianonoise.com Marches on.
Posted by michael at 2:02 PM