A new tradition is born 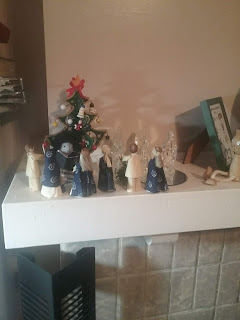 After the joyous reunion this year of all of the members of the creche, one of whom had been separated from the rest for a very long time, our seasonal mouse got a bright idea: why not go caroling at the gingerbread house across the way? And there was much rejoicing, and of course much off-key singing. In fact, the carolers enjoyed it so much they asked our humble mouse to organize a caroling tour to various creches in the neighborhood. Our house boasts several. Some are made of felt, some glass, some are ornaments on our tree. The mouse, an ambitious fellow, thought he'd try them all, but that was before they thought of the cat that patrols the house, and before they realized just what sort of treacherous terrain they would have to overcome.

The first stop was a creche made of glass, on the mantle in the front room. 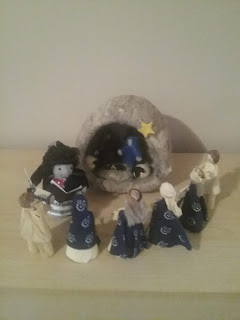 The small wooden cat on the far right, who lives on the mantle, enjoyed the singing very much, and said they could come back anytime. He refrained from licking his lips as he said this; besides, the mouse is just as big as he is, and he is not an idiot.

The next stop was a creche made of felt. This one came from Israel, when Dear Wife's grandmother was there a few years ago. I am pretty certain the glass one came from my side of the family, though I am not sure if it has an exciting provenance. Again the singers enjoyed themselves, and would have been invited in for figgy pudding if Mary wasn't a little busy with her baby. The young lad seems to have forgotten his gift, and had to go back for it whilst the rest of the crew waited patiently.

Then it was on to the upper story. There is in particular a ceramic creche atop the television, and its neighbors include a lazy reindeer and a Christmas tree in miniature. There was no figgy pudding to be had there, either. The carols seem to have confused Mary and Joseph with people who like to cook. 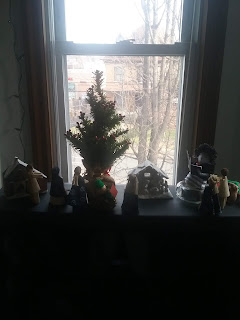 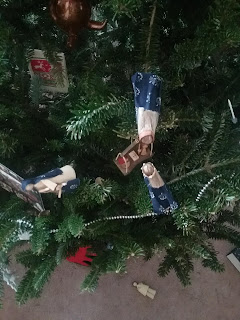 Then it was on to the most difficult stop of all, a creche that was in the midst of the Christmas tree. The original creche's Mary and Joseph had saved themselves a lot of trouble by not coming on this journey. They thought that if they went to visit their counterparts it might mess with the space-time continuum.

The three wisepersons and the shepherd tried to hang on to various branches while singing (which was not easy and produced the weakest tones of the afternoon); our young man could not hold on and fell flat on his back far below (he was not hurt because it's Christmas). Momma and her child managed to sing at a funny angle, and the mice-tro did his best to conduct but is was hard to tell what meter he was in. One of the kings sang lying down in a branch above.

After this they all agreed they'd had enough caroling, even the wiseguy they had left behind because after the first stop he couldn't resist saying "well, we can creche that off our list." He got to spend the rest of the outing on cat-lookout. It turns out that while the cat was very interested in the proceedings, she did not get directly involved. 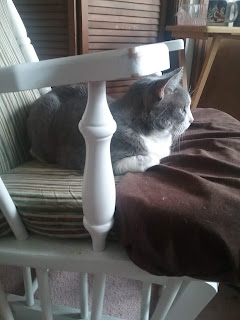 ----
It's the final weekly Christmas edition at www.pianonoise.com
Posted by michael at 5:59 AM