This month I have four different concert programs in five weeks. Last week there were three piano concerts in Ohio, featuring two different programs. This was on the theory (proven correct) that a few persons might be at two of the concerts and the repetition might look lazy. Yesterday I returned to Pennsylvania for an organ recital about a half hour outside of Pittsburgh. It was a summer concert in connection with a farmer's market next store to the church which wanted to capitalize on the foot traffic. I planned my program accordingly, playing lighter fare (even the Bach item was on the virtouso side) including Ives's "Variations on 'America' for the 4th of July. In two weeks I'll be at St. Paul Cathedral in Pittsburgh in a program of what I promised yesterday to people I talked to afterward would be much "better behaved" than the one I had just played. 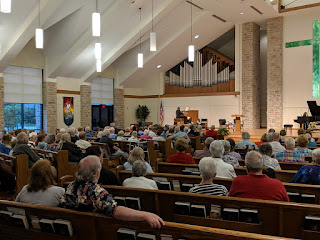 All of this, of course, does require a certain amount of planning. It is not, in my opinion, safe to begin learning a concert program the week before the concert! How does it work for me? Here are a few principles.

First, I try to start preparing as early as possible. Even touching a piece for a day or two and then having to leave it aside from general busyness can be quite profitable. It never seems like the piece is quite as unfamiliar when you come back to it even if it is weeks later. The brain stores the experience somewhere, it seems.

Second, planning programs that mainly consist of music which already has a performance history helps. There was one completely new item on yesterday's program, one that I played once a year ago, one that I've played several times in the past few years, and one that has had two fairly recent performances, that is. in the last couple of years. At St. Paul there will be one piece I just learned this semester, and several others that have only been played one time a few years ago, but I've made sure to compensate for this by preparing this concert the most, and starting the earliest. The piano concerts consisted of pieces I had pretty handily under my fingers (except for one last minute addition).

Third, I triaged the programs in terms of how much work each program was likely to need and which pieces would cause the most trouble. As I've written before, when you are working with a lot of music and on short deadlines, this skill is essential. I'm rarely wrong about how long it will take to get comfortable with a piece, and if I am, it is usually because I wasn't optimistic enough. Of course, if you practice something for four hours straight, one day can do wonders. 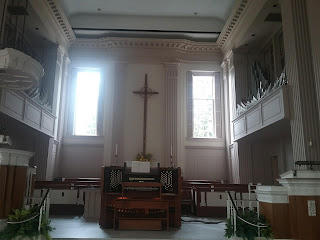 Then comes the juggling. pick up a program, practice for several days, well in advance, put it away so you can work on something else. As the program gets close it is time to cram--well, concentrate on polishing the concert in front of you. In between comes a doughnut hole of neglect, which, if it is large enough, may require periodically playing through the program even if no great progress is made in terms of practice.

This spring I began from the back, working on the St Paul program--most of it, anyway--so that it would have lots of time to mature. I then began work on the piano programs, leaving the other organ recital till later, when the piano programs were almost upon me. At that point I spent the week mainly practicing not for the concert I was about to give but for the next in the series. The strategy mainly worked. There was one piece on one of the piano concerts in which in one of the difficult passages I basically threw up all over the piano, but otherwise, the concerts all went well. The organ recital went well yesterday, too. As my hometown newspaper would have so imaginatively put it "A good time was had by all." (thousands of English teachers just howled).

Three down, one to go.

And if I need something to do with my time in two weeks, I've got five programs to get ready for fall.