It is a dark and stormy night 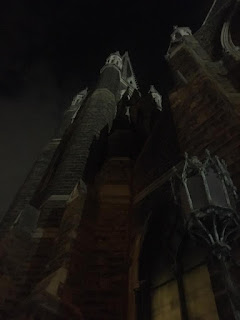 I'm writing this on a night when the weather is most fowl, dark, and Novemberish, with more than a hint of gloom; wet, and cold. Fit for contemplation from a distance.

Fit for tales from the beyond.

Here's one I like to bring out for Halloween--a musical tale. It was written by someone long dead, and unidentified, intended to be played on the organ, that thunderous instrument that inspires terror in so many who dare not approach any building in which it may be housed, awe in those who do. Be prepared for the former reaction.

Its connection with Halloween is tenuous; I mostly put it there because the opening note sounds like another, more famous composition also associated with the spooky occasion (and also speciously). And, it is old. Very old.

We often find old things to be frightening.

But such speculation may be overshooting the mark a little. Most of us probably find old things frightening simply because they are unfamiliar.

I spend much of my time these days in the French, Gothic building pictured above. That photograph is a little dramatic: taken from an angle certain to make things intimidating, and of a part of the architecture that frowns more than some parts of the building; nevertheless, I fear it not. But then, it is part of my regular rounds. I don't fear the sounds of the organ, either, though an occasional thrill still runs through me during the performance of some compositions, no matter how often I play them. I should probably try one of them on Halloween with the lights off.

I might have lost something back there, before I became too well acquainted with history, and architecture, and the plots of scary movies that are actually fairly predictable much of the time, and have lost the thrill of the unfamiliar. But I hear the strains from that piece from so long ago and can't help thinking about the Black Death. Is that too pedestrian because it is real? I'm sure it frightened many persons in its day. It could again.

Maybe our mystery composer was among them.

I wonder what that person experienced. Was the church cold? Was the ink runny? Was there an interruption between measure three and four, and 14 and 15, or did the work flow pleasantly on a warm spring afternoon by the churchyard. In solitude or harassed by parishioners demanding things constantly? Were there cares at home? Were they proud of their work? Was it borne of inspiration, perspiration, some of both?

Which is more frightening: that we will never know the answer to any of these questions, or that the vast bulk of humanity really doesn't care in the least. We are all too busy hurrying to our own graves to care about someone we'll never meet who inconsiderately beat us to it.

Sleep well, my friends. It is a dark and stormy night.