Christmases have been behaving a bit strangely lately. In my years in Illinois the month of December was one blast of musical obligations, one massive joy-spreading enterprise guaranteed to leave you gasping for breath when it was over. Last year, after cancer and a move to Pittsburgh my phone barely rang, and the few gigs I almost got had already been taken by the time I knew about them.

This year, as I've been making friends and contacts, I have re-begun the tradition of the Christmas Rush, even if it is in one short, intense burst. For example, this past weekend I had two concerts in two days (with a church service in between):

The first of these was a concert at  First United Methodist in Pittsburgh, about a mile from where I pull the stops regularly. Tim Coles, the music director, let me practice at his church back in February when I didn't have a musical home, and even offered me this gig which was the only one on the books for a while. This concert/worship service is an annual event, and this year it included a bell choir, a recorder ensemble, the chancel choir, and ensembles of strings and brass. I played the piano for a couple of selections with the strings and choir, and mostly the organ, with the strings for a movement of the Vivaldi Gloria, and with the brass for the evening's main course, the John Rutter Gloria. I also played a couple of organ solo pieces. 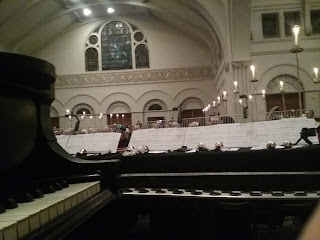 This concert was a bit of therapy, since I am not currently working with any choral organizations, and I have fond memories of the Craig Jessop festival extravaganzas with The Choral, frequently featuring works by John Rutter. I did not serve as the rehearsal pianist this time, so I missed the transition from vocal score to member of the ensemble and the chance to complain that all of my favorite notes got taken away. Although Mr. Rutter has written a nice organ part--the second movement is largely for choir and organ alone (and in some cases just organ) and there are a few bits where you can hear the organ during the outer movements. But the overall effect is what counts and it is a well written study in contrasts and climaxes. 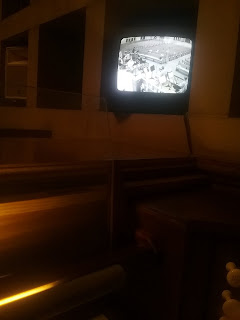 Although closed-circuit Tim was only a couple of inches high and his baton was even smaller it was still visible and things worked out pretty well. Plus I could watch the Discovery channel during the parts I wasn't playing.

First Methodist is a lovely place. Here is a view from the organ bench of the high ceiling: 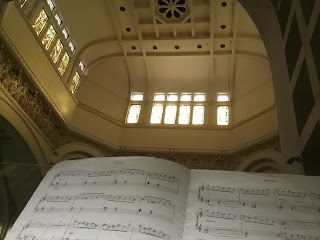 Here is the sanctuary itself as not seen from the organ bench (the organ console is actually under the wreath on the left: 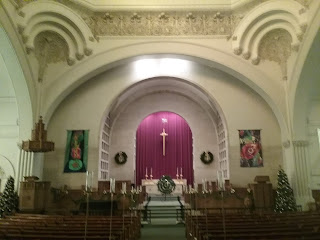 I managed to sneak the picture below during the concert (when I wasn't watching Discovery Channel). If I am ever invited to give an organ concert in the great hall at Hogwarts, I think it will look something like this: 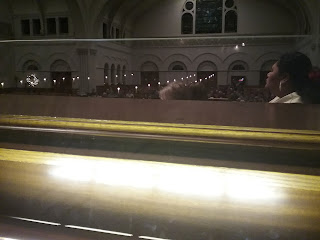 There are candles at the ends of the aisles which, from my vantage point, appear to be floating .

The second concert was on Sunday afternoon at a church in Tarentum (Central Presbyterian), which is about a half-hour away from Pittsburgh. It is a small town and the folks there seemed to really appreciate having a concert. The church has had one for a few years, and uses the radio station to promote their events, so one morning Lenny and Dave Rankin and I found ourselves in the basement of WQED talking into a DAT recorder with Jim Cunningham (the host of the morning show and Pittsburgh Symphony broadcasts) recording a podcast for the "voice of the arts" which is dedicated to promoting local events. It was pledge week so we all gave our best spiel about why YOU should SUPPORT THIS STATION! Apparently at some point last week I could be heard on the radio exhorting Pittsburghers to support classical radio. I hope I didn't drive too many of them away!

I don't have any pictures of this concert, which was given by my two colleagues at Third church and myself, Raquel Winnica Young, soprano, Lenny Young, oboe, and I on the 9-rank Wicks organ. It was a nice little instrument. Since I have been learning to tame the beast at Third all the organs I have visited lately have seemed a little smaller than they used to, but that doesn't mean they don't have their own challenges. 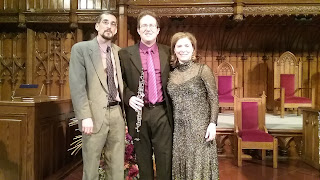 That's us when we gave a concert at Third church.

Our big knock down choral extravaganza at Third was in November so Lenny and I can relax a little bit as the holidays roll on. We have a children's pageant this Sunday in which we play minor roles, and then Christmas Eve is coming in a week with a guest ensemble and all of those carols we haven't been singing yet because we are liturgically aware. And also because I haven't been shopping yet.

Just a reminder, the holiday program is still up at pianonoise radio for the next 10 days. Enjoy the sounds of the season (for free!). See you next week.