I'd like to do something special for you this Christmas. I'm going to take you up to the pipe room.

If you're not an organist yourself, you've probably never been up in one. Even if you are, you may not have spent a whole lot of time up there. 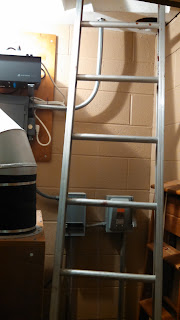 Careful on the ladder! This one's not bolted down.

By the way, don't tell our building manager we're doing this. He'll be worried about the liability issues. I'm not even sure whether our insurance covers virtual falls during virtual tours on the internet.

Great! We made it. Also that's what these pipes go to. The Great! ....nevermind.

We are surrounded by pipes. Careful! There are over a thousand of them, and some of them are pretty small; still, you can do quite a bit of damage to them if you fall on one. And to yourself, of course. No wonder we don't give tours regularly. 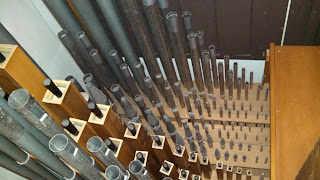 The reason we are up here is so we can get a little perspective. The piano is a pretty terrific instrument, but it doesn't take up three rooms like our organ does. And despite our organ's being on the large side of small, as pipe organs go, it has some 1200 pipes. Now, that takes up a lot of room. And when you are up here, you really get a feel for the size of the instrument. In fact, it is all around you. That console downstairs is only where the decisions are made. The sound comes from up here.

A year ago, when we got our playback system, I got to do something I couldn't do before. I could listen to myself play from somewhere other than the organ bench. So I made my way up here to listen from inside the instrument. It's quite something. And--aren't you lucky--I spent half an hour dragging my recording equipment up into the pipe room so I could make some recordings from in here as well.  I'm going to share one of them (there are some others we can get to later).

This is a nice little Canzona (90 seconds) by Franz Tunder (1614-67) who was organist at St. Mary's in Lubeck before Dietrich Buxtehude, whom Bach traveled so far to hear. First I'll play it for you the way you would hear it in the sanctuary.

Now, as it happens, I was able to record the very same performance from a wholly different angle.

Notice the difference in sound. For one thing, it is dryer, there is no resonance, the pipes are close by, and you will distinctly be able to hear some of them coming from one or the other of your speakers--assuming you have two. I hope you are listening to this in stereo, because otherwise you will lose the effect.

In the opening section, it is just a single flute stop playing, so all of the notes will be coming out of one speaker. (the one on your left, I think. The other speaker is making blower noises because that's the side where the blower is located, in case you wondered what was making all that non-musical racket). 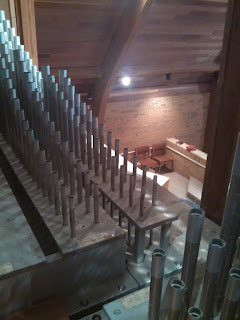 But in the next part of the piece, an even more curious thing happens. Although this is the part where I add several more stops and the piece becomes much louder, I've closed the shutters, which closes off the pipes in the front--the ones you can see from the sanctuary--from the ones back in the pipe room. That's at least 3/4 of the organ that the congregation never sees. The reason they are behind shutters is so you can make them louder or softer depending on whether or not you have opened or closed the shutters in front of them. However, we are now BEHIND the shutters, which makes things sound rather backwards.

You see, the foundation stops--the main stops of the organ, which are expected to have some volume--those are placed out in front, and are not able to be quieted by closing the shutters. But the rest of the pipes are affected by the shutters. Now, here, the stops that would normally be loudest are actually on the other side of the shutters. The ones that you will hear best are the ones in the back of the pipe room, nearest to us. It actually sounds like I am using a completely different registration to play the piece now, but that is only because we are listening to the organ from the opposite direction!

By the way, this was recorded on a hot day in July, and if it sounds to you like one of the pipes was leaking some air, it sounded like that to me, too. I've think we've gotten that fixed by now. The tuner was just here a couple of weeks ago.

Sometimes it is nice to here things from a different angle and to realize how differently they can sound. If only humans could do that more often!

-------
for more perspectives, you can check out my recent podcast interview with host Vidas Pinkevicius on the "Secrets of Organ Playing" blog.

Also, coming tomorrow to the homepage of pianonoise.com: three hours of piano and organ music for the holidays. It will be up through Christmas.
Posted by michael at 8:00 AM