Whose Idea is Organ Registration? 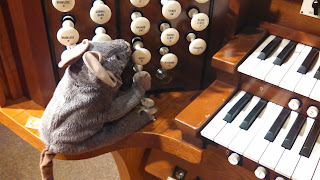 At my Pipe Organ Encounter a few weeks ago, and again when a blog reader asked the question a few days ago, I was asked about the art of organ registration--that is, deciding which groups of pipes,and thus which sounds, to use when playing a piece on the pipe organ. The question was simply this: who decides? Does the composer tell the organist what to do and the organist simply follows a recipe, or does the organist get to/have to figure it out on his or her own?

And the answer is decided YES! (can you tell I've been to grad school? I want to have it both ways.)

The organ literature is vast. And each organ is unique--more so than other instruments. Those two things will help with the answer.

Most of the organ music written before the 19th century contains few, if any, instructions in the score indicating what stops to use. There is a single piece by Bach that I can recall that has a few (very unusual) indications, and several others that give the instruction "organo pleno" or "full organ" which basically means pull out all the stops. But most of the time specific instructions are lacking.

Of course, music from that time (18th century) doesn't usually contain dynamic or tempo markings, either. If the composer himself were playing the music that wouldn't be so much of a problem, and dynamic marks were less of an issue because keyboard instruments of the time couldn't vary their level of sound except by changing registration, which was hard to do while playing. As for the tempo, and the single dynamic decision you might still want to indicate at the beginning of the piece, the performer was expected to know what kind of piece was being played, and for what reason, and to make informed decisions as to what kinds of sounds would be appropriate. Beyond that, there was a certain degree of freedom. Bach is said to have surprised a lot of his contemporaries by the choices of stops he often used.

On the other hand, the French composers of the 18th century had quite a few rules for registration, and often put the one they wanted in the very title of the piece! An organist had to know which stops made up a "grand jeu" or a "cornet separable"--using your imagination was probably frowned upon in that situation.

Leave it to the French then, in the 19th century, when the organ was getting larger and more diverse, to start indicating specific registrations for each piece, and often to suggest registration changes within a piece (this was usually done with the aid of an assistant or two).

The problem there is that each organ is its own animal. The composer might have stops on his or her organ that a given performer doesn't have, in which case, it helps to find "synonyms"--to know which stops belong in which groups, and to find stops that more or less sound like the ones the composer has asked for.

In the 20th and 21st centuries, composers take different approaches to registrations of their works. Some are very specific. Others give general suggestions, and occasionally, none at all. But the variety of instruments require that the composer will have to leave at least some of the decision making to the taste of the performer. Sometimes even the same stops on one instrument won't balance as well on another. In nearly every case, there is some collaboration between the composer and the performer--even, sometimes, when they are the same person!


When it comes to deciding which manual to play something on, decisions are similarly left to the performer in many cases, and sometimes actually detailed in the music (which also requires specialized knowledge of your subject because different countries use different names for the manuals--a "great" in one country can be a "hauptwerk" in another). Since the Baroque period (Bach, etc.) organ music is usually written on three staves, with the pedal part on the third staff to make it clear what belongs to the pedal. But again, in older music, we find that there are only two staves, just as in piano music. There the pedal part was often placed on the second staff along with notes to be played on the manuals, and unless there was a special "ped" designation in front of the first note it would be partly guesswork to decide whether or not to play those notes on the pedal or in the hands. Usually the pedal would take the lowest note, and, if it is impossible to reach all of the notes on the bottom staff with your left hand, then you have a pretty good indication that the notes should be played with the pedal. Otherwise, you might not use the pedal at all.

Short answer: it depends.
Posted by michael at 8:00 AM

Email ThisBlogThis!Share to TwitterShare to FacebookShare to Pinterest
Labels: for musicians, organ registration