In my last post, we talked about memory pistons: buttons (or studs) that could be operated with the hands or feet, which would instantly recall a pattern of stops programmed ahead of time, allowing the organist to change the sound of one or both keyboards and the pedal-board all at once. This has unfortunately put some organist assistants out of work, though I don't hear any complaining.

Each of these divisions has its own set of stops, which, you recall, means that the various families of sound on an organ, flutes, foundations, reeds, strings, mixtures, and mutations, are available to be used on a particular keyboard. Our organ is large enough to have some of each type on each division, except that the mutations are only available on the swell.

But those divisions don't have to be kept completely separate. It is possible to "couple" one keyboard to another. The swell, and every sound presently on it, can be connected to the great. That means if you have the swell trumpet stop on, it will sound both on the swell and also on the great keyboard. This is in addition to any stops you've got on the great itself. You can do the same thing by coupling either the swell or the great to the pedal, and play the swell mutation stops with your feet if you feel like it.

There's more fun. Besides simply coupling the swell to the great at regular pitch, that is, the eight-foot rank, you can also do this at the 4-foot or the 16-foot level. These are known as super-couplers and sub-couplers.  A super-coupler would take that same swell trumpet and put it on the great anb octave higher, so when you played middle c it would now be up and octave. A sub-coupler does the opposite. Note that any stops that were on the great original would not be affected. A creative use of these couplers means that you could play a single note and have up to three octaves sounding at once.

You can do the same thing within divisions--that is, you can couple the swell to the swell and the great to the great an octave higher and/or lower. That would double the entire output of that keyboard to include the upper and/or lower octave.

And if that isn't enough fun, you can eliminate that middle octave, the note you are actually playing, leaving only the octave above and/or below, by deploying the "unison off" knob, which cancels any stops deployed on that keyboard and leaves only the results of the sub- and super-couplers.

A word about that little item.

Over the summer I was asked to play a wedding at another church. This organ happened to be the first one built (or re-incarnated) by the firm in town that was refurbishing our organ at Faith. As organs all tend to be different, this one placed this unison off with the other couplers on the front of the console right above the keyboard. At Faith this feature is placed with the stop knobs to the right and left of the keyboard. 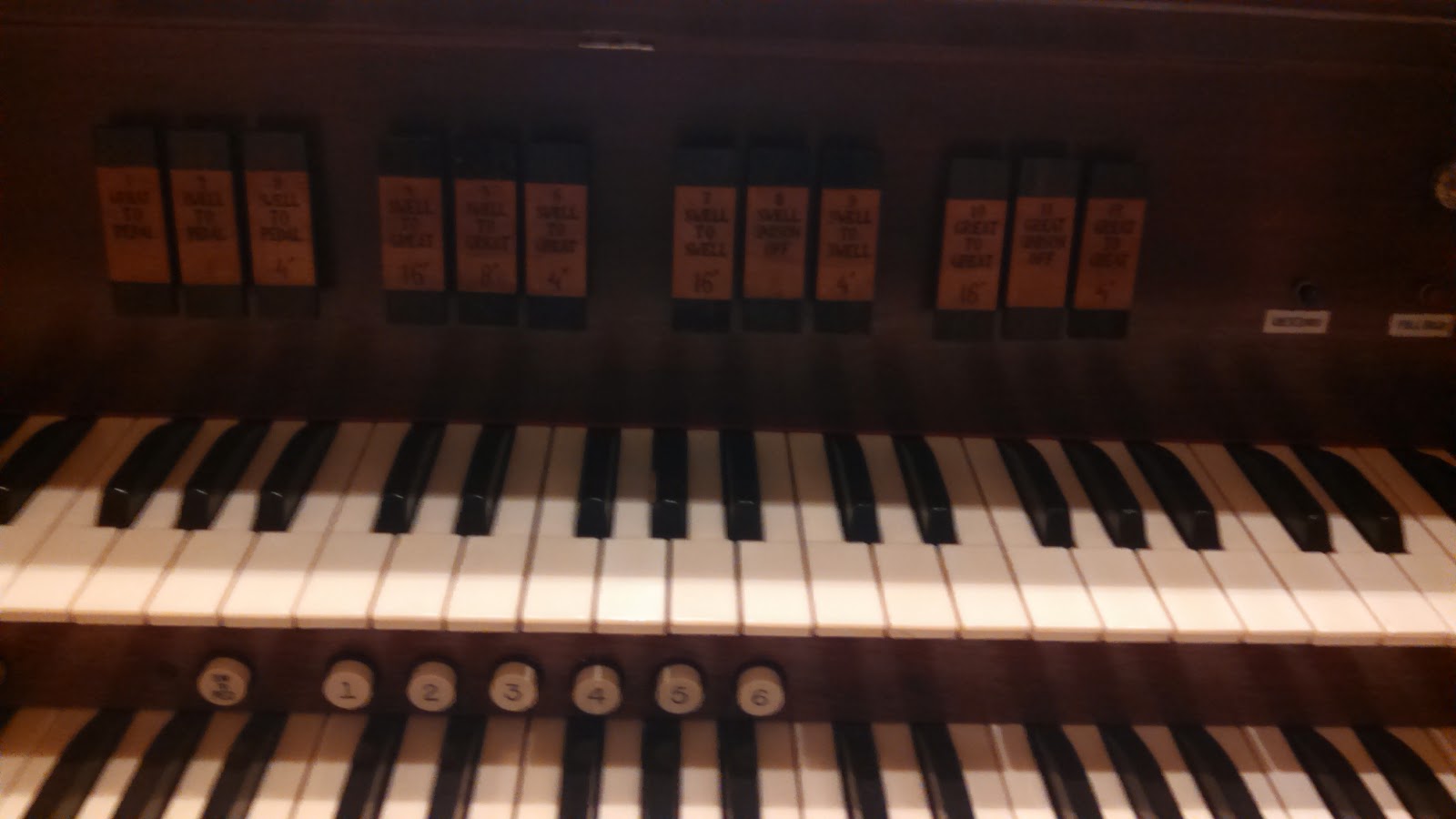 the couplers are right above the keyboards

These couplers offer very little resistance and are easy to accidentally switch on, especially if you have long fingers or pianistic training and are at all inclined to travel forward into the back of the key as you play/follow through. A few days before the wedding I was practicing when suddenly the organ went silent. I was still playing notes but nothing was happening. I knew the power had not gone off. It took a few seconds to realize that the unison off switch had been accidentally flipped on.

A couple of days later, about an hour before the wedding, the same thing happened while practicing, and I made sure to remind myself to watch those levers like a hawk. Fortunately this didn't happen at the wedding itself. But when I see Jean-Paul Buzard next I'll ask him if he still puts the unison off switch above the keyboard and if he does ask him not too! 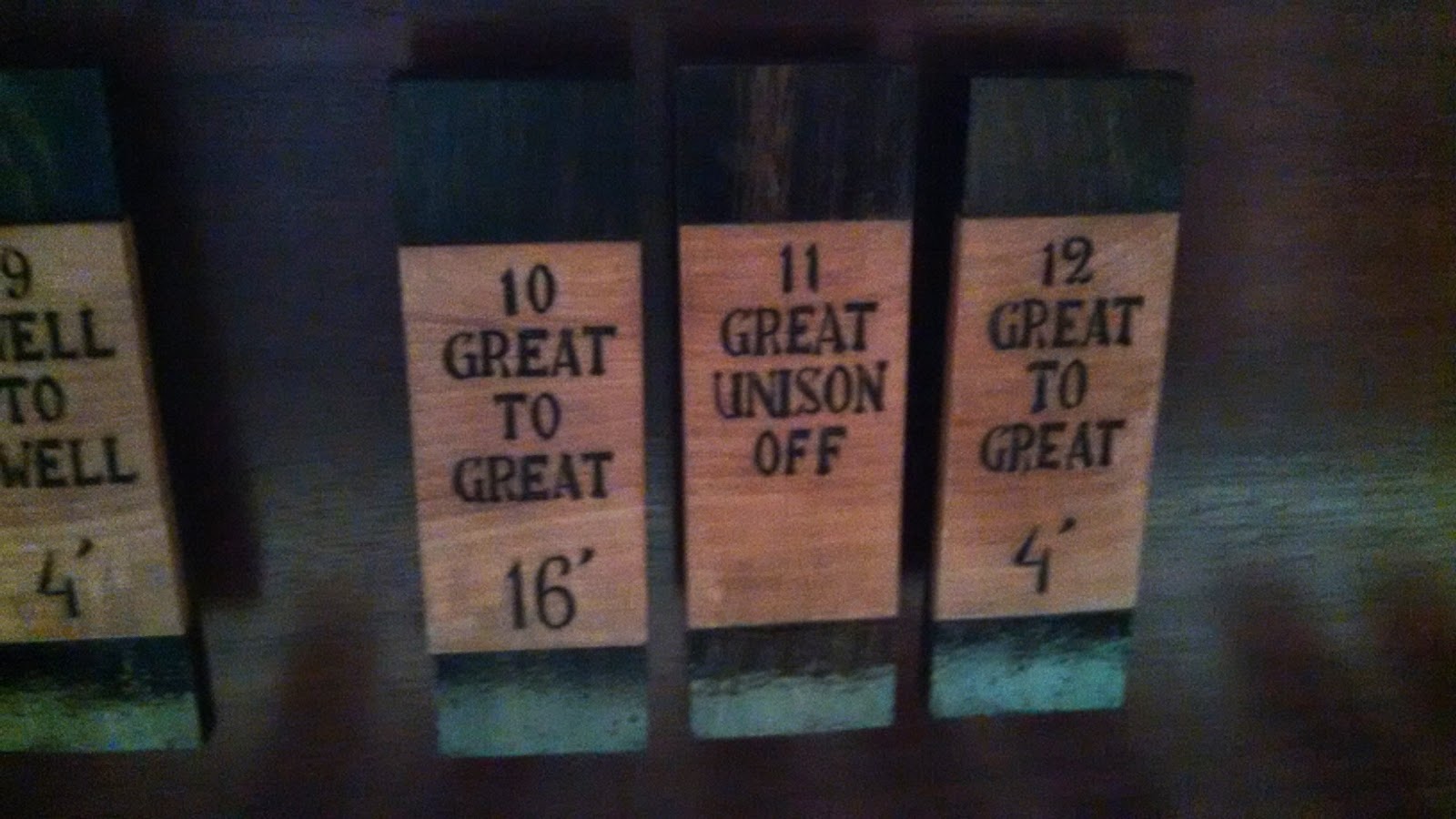 Couplers like this not only increase the organ's flexibility, they provide a lot more sound.

I once had an experience with some bagpipes. They were giving a concert in the sanctuary around Christmas, and they asked me to join them. I had never accompanied 8 bagpipes on the organ before. I think we played Highland Cathedral. It was the one time I wasn't sure I could completely drown my ensemble partners if I wanted to! That's a little bit of an odd feeling for an organist. I had all the stops pulled out on the great and the balance was pretty good.

But then I remembered that I still had all the couplers in reserve, which would have more than doubled the organ's volume--combining the two keyboards and adding upper and lower octaves to them both, so I was really still holding back.

Because an organist knows: "Pulling out all the stops" really is only about half of it.
Posted by michael at 8:00 AM